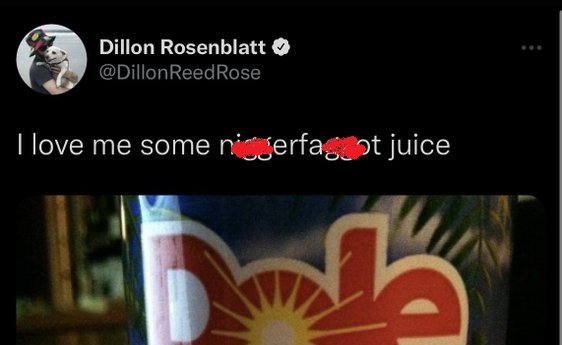 Earlier on Tuesday, Trump-Endorsed Arizona Senate Candidate Blake Masters exposed a Fake News journalist for disgusting tweets about women, Asians, Blacks, and gays, which resulted in the immediate termination of this reporter.

The former reporter, Dillon Rosenblatt, has previously lied about Blake Masters on multiple different occasions, falsely claiming that he “wants to allow states to ban contraception use” and that he is a Nazi sympathizer. The Gateway Pundit previously reported that Masters promised to sue the Arizona Mirror over these defamatory claims.

These radical left-wing smears have even been used by his RINO primary competitors, who are upset after losing President Trump’s Endorsement to Blake.

Earlier today, however, Masters ended the career of the poor lying hack!

Masters: “You shouldn’t throw stones if you live in a glass house, and if you got a glass jaw you should watch your mouth.”

“You shouldn’t throw stones if you live in a glass house, and if you got a glass jaw you should watch your mouth.” pic.twitter.com/Q8ven3fX4r

The exposure of these horrible statements led to the immediate firing of Rosenblatt.

“After authenticating the tweets, the reporter was immediately terminated,” said the Arizona Mirror in a statement released shortly after. Blake Masters compiled 17 of these racist, sexist, and homophobic tweets in a public google drive that can be accessed here.

“I only deal with women for 3 reasons: sex, money and making me sandwiches” #AHSFX #wordstoliveby