Sarah Stogner Has a Lot to Say for Herself – Texas Monthly 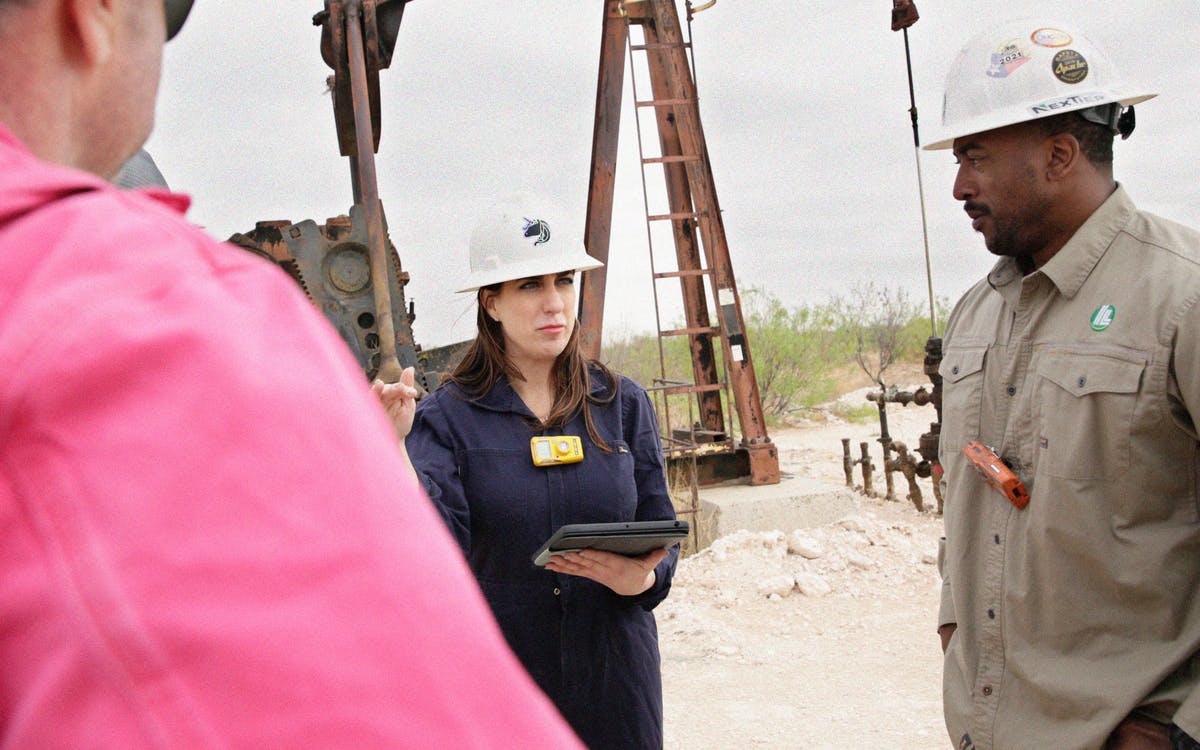 Sarah Stogner has put 25,000 miles on her Ford Expedition since January. During that time, the 37-year-old has run an unconventional campaign as a Republican candidate for the Texas Railroad Commission—an office which, the oil and gas attorney is quick to point out, has nothing to do with railroads and everything to do with regulating the industry in which she made her career.

Stogner jumped into a crowded race for a seat on the three-member commission in January, one of several challengers to incumbent Wayne Christian, a Grammy-nominated gospel singer and former state representative accused of corruption. She refused donations from within the oil and gas industry, and her campaign received a boost when it picked up its lone newspaper endorsement, from the San Antonio Express-News. Stogner lost that endorsement, however, after she posted a video to the social media accounts she utilizes heavily—one that shows her in the oil patch wearing only underwear, pasties, boots, and a hat (with a few well-placed filters keeping her from an R-rating), declaring that her “other assets” would level the playing field between herself and her well-funded competitors. “Please tell me how I am supposed to get the media’s attention so I can discuss these important issues,” she wrote on LinkedIn after the paper took back its endorsement. “I’ve been trying. For years. And guess what finally worked? Five seconds of me scantily clad on top of a pump jack.”

Despite the lost endorsement, the unorthodox strategy to get her name into the headlines appeared to pay off: two weeks after she put up the video, Christian fell short of the 50 percent threshold to avoid a runoff—and it was Stogner, who received the support of 15.2 percent of GOP primary votes, who narrowly took second place.

Stogner’s thesis was that the work of the Railroad Commission, starting with its misleading name, is hard for voters to understand, which makes it difficult for them to grasp the issues at stake in a campaign. Her solution was to find a gimmick to thrust her into the conversation. Voters proved her correct, it seems, which means that she’s earned the opportunity to discuss those important issues. Texas Monthly caught up with Stogner as she put a few hundred more miles on her car en route to a candidate forum in Jewett (about two hours north of Houston), to get her views on regulation, the reliability of the Texas power grid, and whether Bitcoin mining can help rein in the pollution caused by gas flaring.

This interview has been lightly edited for length and clarity.

Texas Monthly: How often do you have to start your pitch to voters by explaining what the Railroad Commission actually does?

Sarah Stogner: On TikTok, if you read the comments, people are like, “Oh, I’ve got this railroad by my house,” and I’m like, “Yeah, it doesn’t have anything to do with railroads.” At political events that I go to, most of those people know, because they’re politically involved. And then obviously when I go to oil and gas events, they all know because they deal with them. But if I’m at the grocery line or at a restaurant or something like that, I’d say—and this is a completely made-up number—but I’d say eighty percent of people in the wild have no idea what the commission does.

TM: How do you convince them that this is a race that actually affects their lives?

SS: When I have two or three minutes to introduce myself, I tell them the story of being an oil and gas lawyer and moving out onto a ranch that has contaminated groundwater. And that resonates. I’m trying to get the word out, and I’m talking about the issues. When I’m in Midland, I talk about the earthquakes. In the cities, it’s harder. Anybody that’s on well water identifies with being scared that their well water is going to be contaminated. People that are on city water take for granted where their water comes from. And so there, I change my speech to be like, “When you turn on the tap, you trust that the government is filtering your water, and is cleaning it, and protecting us. And what do you do when they’re bought and paid for?”

TM: Does that message resonate?

SS: With the freeze, everyone experienced blackouts. It doesn’t matter where you are in the state. And we’ve been improperly blaming renewables—it’s not just wind and solar that messed up. Everything failed. One of our nuclear plants went down. It was a catastrophe on all fronts. Everyone needs to take responsibility.

TM: What can the Texas Railroad Commission do to ensure grid reliability in the event of a freeze, or a heat wave, or another weather event that threatens a blackout?

SS: We’re adding a thousand new people to Texas per day. There’s no such thing as energy transition—it’s energy expansion, and we need all of the energy that we can get that’s clean, affordable, and reliable. And we need hundred-year decisions made about infrastructure, not based on an election cycle, which is what it’s been—it’s all been politicized. For a long time, you had pipeline donations to all of the various entities in the government that regulate them, and they’ve essentially dictated their own terms. We’ve got to do what’s best for all Texans. And I don’t have all the answers, but I trust that if we start asking the right questions, the subject-matter experts will help us figure it out. But we’ve got to get the career politicians and the bureaucrats out of the way so that common, rational policy decisions can be made. It shouldn’t be partisan.

TM: There’s a conventional wisdom in Texas, given the number of oil and gas jobs in the state, that what’s good for the industry is good for Texans. How do you push back against that notion when you’re talking to potential voters?

SS: Look, a third of Texas’s economy is based on oil and gas. If we were a stand-alone country, Texas would be the third-largest oil-producing country in the world. But we have to do it the right way. And we can. We’ve got the technology. We’ve got good operators out there. We shouldn’t be using fresh water; we should be recycling our water and using gray water. We shouldn’t be flaring. We need to get our pipelines better. We need to get our infrastructure better. The regulations need to be effective. They’ve been used as a weapon against actually having to do the right thing—complying with the rule, but not with the spirit, of the law. And lack of enforcement means most operators are as afraid of [the regulators] as you and I are of the meter maid. We need real punishment, and then real rewards for good operators.

Let’s figure out how to get rid of the orphan well problem. Let’s not give P-5 [permits and licenses] to people who file bankruptcy that have stranded wells. Let’s let good operators figure out some sort of financially incentivized way to go in and rehab those wells that are capable of producing, or plugging them out, or getting carbon capture. There are all sorts of opportunities, if we want to use them. But technology moves really fast. You know, I was talking about Bitcoin mining with flare gas years ago, and everyone said I was crazy. And now look where we are.

TM: Where are we?

SS: You can hook up a generator, and instead of flaring natural gas [which causes pollution] in situations where there’s no takeaway capacity, the generator generates electricity that powers Bitcoin miners. You can build facilities so you have something that’s using this takeaway that can’t go onto the grid for whatever reason, and you put it to beneficial use in mining. And then when the grid needs it, you stop and you put it onto the grid when you can get the pipeline capacity, instead of flaring.

TM: What kind of reaction does a campaign that talks about stronger regulation of the industry get in a Republican primary?

SS: Most Republicans really resonate with law and order, right? We believe in limited government, but we also believe in rules, and in following the rules. That resonates a lot for voters. It doesn’t resonate with the bad oil and gas operators who have already bought and paid for the incumbent.

TM: You’ve been an oil and gas attorney. What’s your current relationship with the companies you’ve represented in the past?

SS: I still represent some. Great relationship. I’m honest about my position that we need to enforce regulations fairly. And I won’t be able to represent them once I’m in office.

TM: Are there steps you can take to help voters be confident that those relationships won’t create conflicts or influence the way you carry out your responsibilities, if you’re elected?

SS: Continue to be honest and transparent. I’ve never been a regulatory attorney. My first experience in front of the Railroad Commission was representing a landowner. I love Texas and am running to represent all Texans. I’m not taking any campaign money from the industry. The industry associations are actively backing my opponent. That says a lot. My support is more quiet. But I have a lot of it.

TM: What has being an oil and gas lawyer taught you about the industry that you plan to bring with you to the Railroad Commission, if you’re on it?

SS: My practice was devoted to advising companies on contracts between themselves for projects—and then, when things go wrong, because, absolutely, accidents happen, suing insurance companies who didn’t pay what they owed. It was cheaper to hire lawyers than it was to just step up and do the right thing. At the end of the day, what I’ve learned, being a lawyer of almost fifteen years, is that it all comes down to money. And what costs the least amount of money? Where do you get the most bang for your buck?

If it doesn’t seem like someone’s making a rational decision, the question is: Who are [the rule makers] sleeping with, or who’s paying them? That’s it. And once you figure that out, it’s really easy to go, “Oh, this is why these policies exist.” We just need somebody that’s not in it for the long haul, who actually believes that politics is an act of public service. I don’t want to take a pay cut and move to Austin, but I’m willing to do it because I know I’m qualified, and it needs to be done, and I want to leave a legacy that I’m proud of, where my daughter is proud that her mom was an oil and gas lawyer. And right now, I’m not proud of some of the stuff that we’re doing. But it’s not too late. I still have hope that we can turn it around.