Salzburg comes alive again to the sound of music 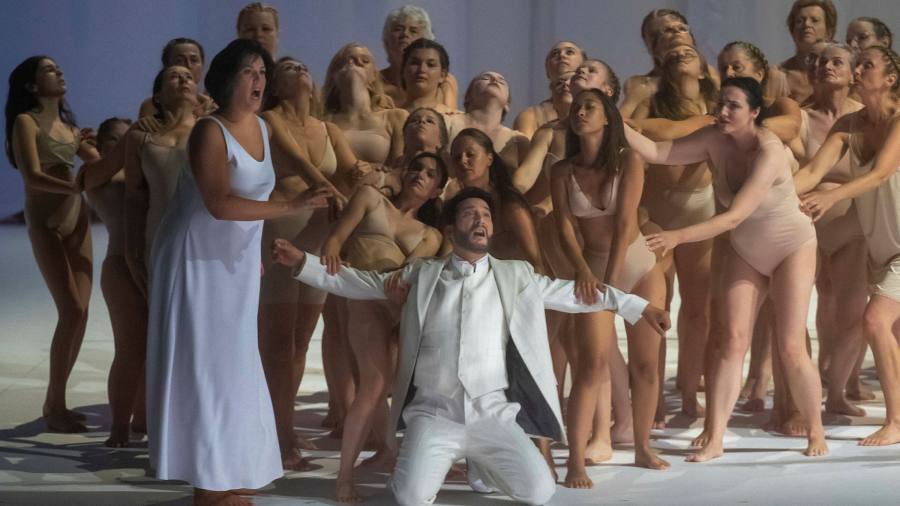 Sign up to myFT Daily Digest to be the first to know about Austria news.

For 18 months, most of the world’s great orchestras and opera singers have played to empty seats, if at all, as the pandemic brought down the curtain on live performances.

But for the past four weeks, the concerts of the Salzburg Festival — one of the world’s most revered classical music galas — have been packed as Austria puts the performing arts at the forefront of its return to normality.

The Festival’s Covid safety strategy has been shared with over 50 institutions worldwide — including the Bayreuth Festival and San Francisco Opera House — as an example of how to stage cultural events safely. Even Austrian football clubs have been liaising with the organisers.

As the music returns to Salzburg, the elegant baroque squares of city’s old town are thronged with concertgoers. In the bars, the crush to order champagne is three or four deep. An eager audience crowds into The Great Festival House. The music is back.

Don Giovanni, an opera whose central character is not keen on social distancing, is staged with a large cast, even though it does not require one, as if to show what can be achieved with vaccines and confidence. It features a chorus of 150 women, representing Don Giovanni’s past seductions.

Large indoor gatherings have typically been among the last events that governments have allowed to reopen as Covid cases ease. But Austria, with its deep state commitment to the arts, has embraced their return.

“There’s no doubt about it — the arts and culture are essential assets of Austria’s economy and society,” Andrea Mayer, state secretary for art and culture told the Financial Times. “Austria is a country of artists.”

The sector employs 120,000 people and contributed €7.2bn to the economy in 2019, Meyer said. Last year the government increased arts spending by 70 per cent.

“The arts and culture have the power to contribute enormously to society’s recovery . . . We need their intellectual stimulation, their inspiration, and the joy, imagination and critical reflection,” said Mayer.

Despite the optimism, Austria is not out of trouble yet. Cases of coronavirus have ticked upwards as the Delta variant has taken hold. Having fallen to just over 60 new cases daily in June, new infections are now in the region of 900 a day. Around 55 per cent of the population is fully vaccinated, but the rate of new jabs has fallen significantly.

Many in the country’s classical music scene nevertheless believe that the bold steps taken this summer will prove to Austria and the outside world that life can safely return to music — and that music can help bring society back to life.

“It is the big challenge for all of us now to get out of the psychological crisis mode we are all in. We are all still in such a high state of alert, but we have to find a point where we can get back to normality,” said Lukas Crepaz, co-director of the Salzburg Festival.

“Performances like this are a big part of that — of course we are very focused on safety . . . Society and humanity cannot afford to stay in crisis mode forever.”

The Salzburg Festival was already an outlier. It went ahead last summer too, albeit at a reduced capacity and with a limited programme.

This year, it was not clear that the Festival could run at full capacity until the early summer. The final third of tickets went on sale on June 7. That day and the following were the two biggest sales days in the box office’s 101-year history.

The organisers’ confidence, said Crepaz, comes from following the data and science about how the virus spreads. The Festival focused early on aerosol transmission and commissioned its own studies which were later sent to Austria’s government. Last year, there was not a single infection at the festival.

This year, with all festival goers needing to be vaccinated or tested negative within 72 hours, the venues are even safer, said Crepaz. FPP2 masks are mandatory for the duration of the performance, but there are no restrictions on seating.

Despite the threat of restrictions returning to public life in the autumn, most in the Austrian music sector are hopeful that supporting the arts will continue to be the highest priority in Austria.

“It’s an extremely difficult situation right now. There’s a fourth wave coming and its scary,” said Daniel Froschauer, first violinist and chair of the Vienna Philharmonic. But, he added, it was important for cultural life to carry on.

“Our role is to show politicians what can be done.” Austria can set an international example, he believes. “We are not the world leaders in soccer, but Austria has the philharmonic and with that we really are. We can be an example.”

Froschauer said he was “shocked” by how many other governments around the world were letting the arts suffer, with many wrongly seeing culture as a social extravagance.

“The soul is not a luxury, soul is life sustaining and it needs to be nurtured,” he said. “There are things you cannot express with words. This is so important.”