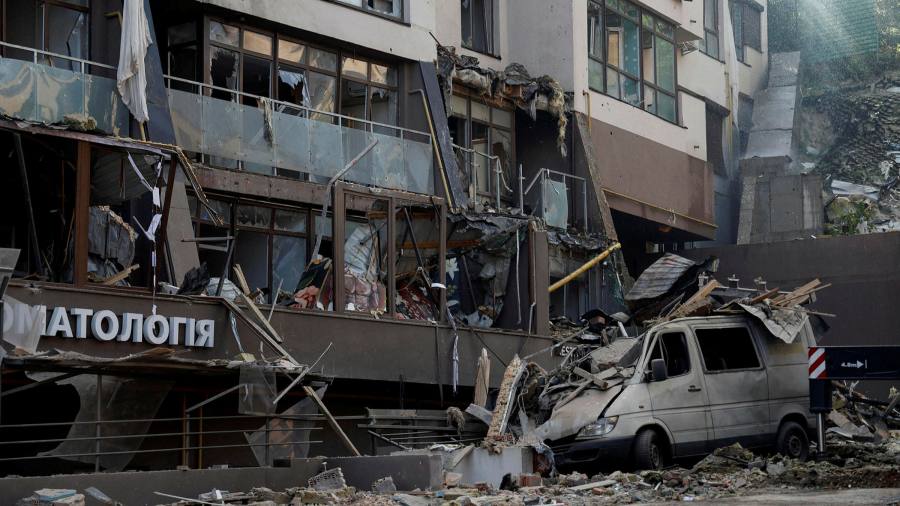 Russian missiles struck Kyiv on early Sunday morning, a day after a barrage of missiles hit targets across Ukraine and just hours ahead of a G7 meeting in Germany that will discuss new ways to punish Moscow for its invasion.

The missiles hit residential buildings in Kyiv’s central Shevchenkovskiy district, just after 6am local time, causing a fire and leaving a huge plume of smoke above the Ukrainian capital. A mission to rescue people trapped in the rubble was under way on Sunday morning.

A security official involved in the rescue said one person was dead and five seriously injured, but others remained trapped. He said a nearby children’s school had also been hit.

The new attacks over the weekend come as more western artillery is being delivered to Ukraine to help fend off the Russian offensive in the country’s east. The missile attacks prompted calls from Ukrainian officials for western allies to supply more air-defence weaponry.

He urged western countries to designate Russia as a “state sponsor of terrorism ASAP” and step up their supply of armaments. “Ukraine needs modern missile defence systems badly. We are telling it [to] our allies. Weapons save lives,” Yermak said.

It was not immediately clear how many people were injured or killed in Sunday’s attack in Kyiv. In live television footage, Ukrainian police were quoted as saying a child was rescued from a building and that her mother was being pulled from the rubble.

Ukroboronprom, a Ukrainian weapons manufacturer, has buildings in the area too. “This is the third time they’ve targeted [the plants] — and missed each time,” said a security official, referring to earlier Russian strikes in the same area.

One of the missiles fired at Kyiv on Sunday flew dangerously close to a nuclear plant in the south of the country, according to a statement on social media by Energoatom, Ukraine’s state nuclear generator.

The attack on Kyiv came while most residents were sleeping and follows weeks of relative peace in the capital, despite a continuing and bloody battle for control of Ukraine’s south and east.

On Saturday, Russia fired more than 40 missiles at Ukrainian targets, including some launched from Belarus, where president Alexander Lukashenko has supported Russian president Vladimir Putin’s invasion of Ukraine.

Anton Gerashchenko, an adviser to Ukraine’s minister of internal affairs, said on his Telegram channel that the cruise missiles that hit Kyiv on Sunday had been launched from bombers flying over the Caspian Sea.

Signs that Russia may be stepping up its aerial attack on central and western parts of Ukraine come as European countries pledge more support for the Ukrainian war effort and western heavy artillery begins to arrive on the frontline.

G7 leaders are convening in Germany to discuss how to increase pressure on the Kremlin to end a war that has also fanned inflation and triggered fears of global food shortages as Russia seeks to prevent exports of wheat from Ukraine.

Proposals for tighter western sanctions on Russia include a ban on imports of gold from the country — another bid to deprive Moscow of export income to support its invasion of Ukraine.

Nato countries are holding a summit in Madrid on Tuesday. Zelenskyy will address both the G7 and Nato summits.