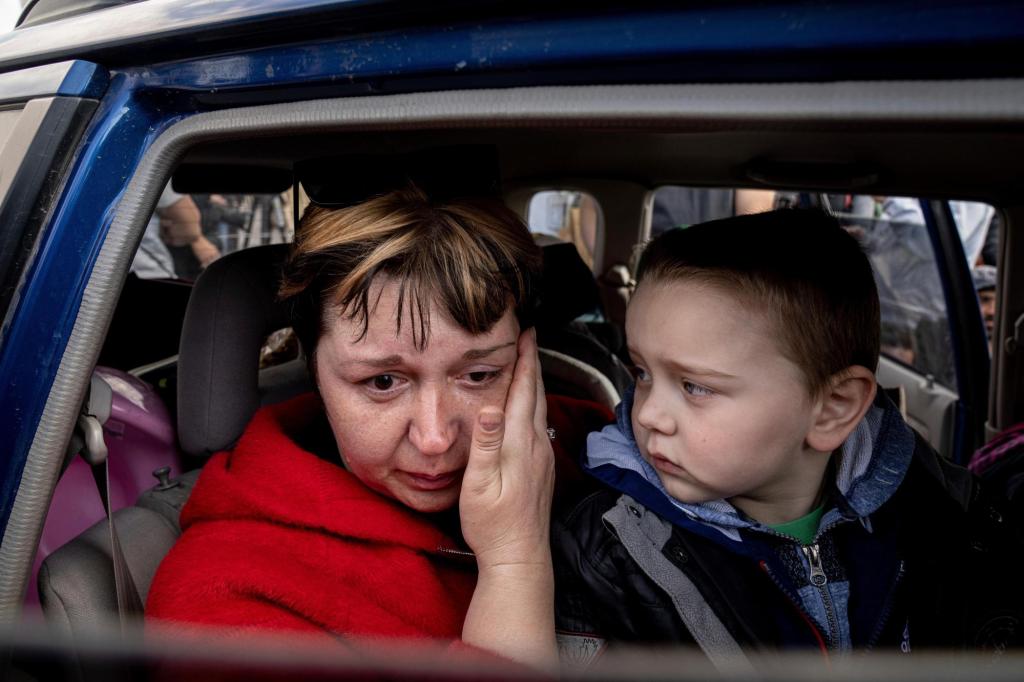 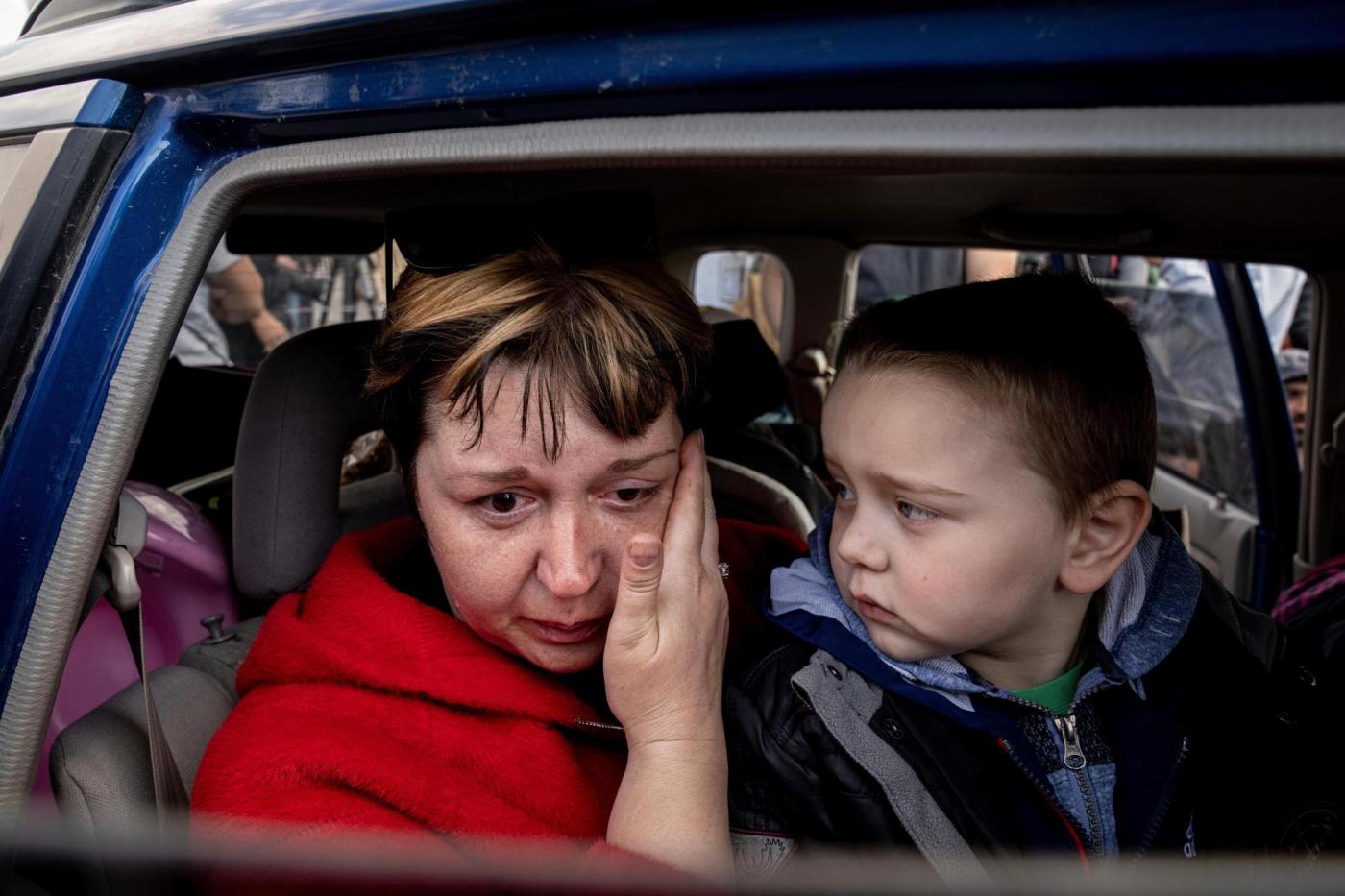 By CARA ANNA and YESICA FISCH

ZAPORIZHZHIA, Ukraine (AP) — Ukrainian defenders of a steel plant in Mariupol say Russian forces have started to storm the the last pocket of resistance.

The move comes almost two weeks after Russian President Vladimir Putin ordered his military not to storm the plant, but rather block it off.

The deputy commander of the Azov Regiment that is holed up in the Azovstal steel plant confirmed that Russian forces have started to storm the plant on Tuesday.

That comes after some civilians escaped the plant over the weekend in a U.N.-assisted evacuation effort.

THIS IS A BREAKING NEWS UPDATE. AP’s earlier story follows below.

ZAPORIZHZHIA, Ukraine (AP) — Aid workers prepared hot food, wheelchairs and toys Tuesday for civilians slowly making their way to relative safety from the pulverized remnants of a steel plant in Mariupol, as Russian forces resumed strikes on the facility.

The Azovstal steel plant is the last holdout of Ukrainian resistance in a city that is otherwise controlled by Moscow’s forces and key to their campaign in Ukraine’s east. A senior U.S. official warned that Russia is planning to annex much of the country’s east later this month.

At a reception center, stretchers and wheelchairs were lined up, tiny children’s shoes dangled from a shopping cart and a pile of toys waited for the first convoy of civilians whose evacuation is being overseen by the United Nations and Red Cross.

Their arrival would represent a rare glimmer of good news in the nearly 10-week war sparked by Russia’s invasion of Ukraine that has killed thousands, forced millions to flee the country, laid waste to towns and cities, and shifted the post-Cold War balance of power in eastern Europe.

More than 100 people — including elderly women and mothers with small children — left Mariupol’s rubble-strewn steelworks over the weekend and set out in buses and ambulances.

At least some were apparently taken to a village controlled by Russia-backed separatists. The Russian military said some chose to stay in separatist areas. In the past, Ukraine has accused Moscow’s troops of taking civilians against their will to Russia or Russian-controlled areas — something the Kremlin has denied.

Others left for the Ukrainian-controlled city of Zaporizhzhia, some 140 miles (230 kilometers) northwest of Mariupol. It was not clear why the evacuees’ journey was taking so long, but the convoy likely had to pass through heavily contested areas and many checkpoints.

Mariupol has come to symbolize the human misery inflicted by the war. A Russian siege has trapped civilians with little access to food, water and electricity, as Moscow’s forces pounded the city to rubble. The plant — where about 1,000 civilians sought shelter in a warren of underground bunkers along with some 2,000 fighters who have refused to surrender — has particularly transfixed the outside world.

But Russian forces and their allies resumed strikes on the plant on Tuesday. Vadim Astafyev, a Defense Ministry spokesman, said that Ukrainian fighters at the plant used the cease-fire that allowed civilians to flee to take up new positions.

They “came out of the basements, took up firing positions on the territory and in the buildings of the plant,” he said. Russian troops along with the Moscow-backed separatist forces used “artillery and aircraft … to destroy these firing positions.”

After failing to take Kyiv in the early weeks of the war, Russia withdrew some of its forces and then said it would switch its focus to Ukraine’s eastern industrial heartland of the Donbas. Mariupol lies in the region, and its capture would deprive Ukraine of a vital port, allow Russia to establish a land corridor to the Crimean Peninsula, which it seized from Ukraine in 2014, and free up troops for fighting elsewhere in the Donbas.

Michael Carpenter, U.S. ambassador to the Organization for Security and Cooperation in Europe, said Monday that the U.S. believes the Kremlin plans to annex much of eastern Ukraine and recognize the southern city of Kherson as an independent republic. Neither move would be recognized by the United States or its allies, he said.

Russia is planning to hold sham referendums in the Donetsk and Luhansk regions in the Donbas that would “try to add a veneer of democratic or electoral legitimacy” and attach the entities to Russia, Carpenter said. He also said there were signs that Russia would engineer an independence vote in Kherson.

Mayors and local legislators there have been abducted, internet and cellphone service has been severed and a Russian school curriculum will soon be imposed, Carpenter said. Ukraine’s government says Russia has introduced its ruble as currency there.

Getting a full picture of the unfolding battle in the east has been difficult because airstrikes and artillery barrages have made it extremely dangerous for reporters to move around. Both Ukraine and the Moscow-backed rebels fighting in the east have introduced tight restrictions on reporting.

But so far, Russia’s troops and their allied separatist forces appear to have made only minor gains, taking several small towns as they try to advance in relatively small groups against staunch Ukrainian resistance.

In its daily Twitter statement on the war, the British military said Tuesday it believes the Russian military is now “significantly weaker” after suffering losses in its war on Ukraine.

“Recovery from this will be exacerbated by sanctions,” the ministry said. “Failures both in strategic planning and operational execution have left it unable to translate numerical strength into decisive advantage.”

In a speech delivered remotely to Ukraine’s parliament, he echoed the words of Britain’s World War II Prime Minister Winston Churchill as he lauded the country’s defiant response to the Russian invasion.

“The so-called irresistible force of Putin’s war machine has broken on the immoveable object of Ukrainian patriotism and love of country,” he said. “This is Ukraine’s finest hour, that will be remembered and recounted for generations to come.”

Pope Francis was quoted Tuesday in an Italian newspaper as saying that he offered to travel to Moscow to meet President Vladimir Putin about three weeks into the invasion. The pontiff told Corriere della Sera that he has not received a response.

On Monday, Ukraine said Russia struck a strategic road and rail bridge west of Odesa, a major Black Sea port. The bridge was heavily damaged in previous Russian strikes, and its destruction would cut a supply route for weapons and other cargo from neighboring Romania.

A satellite image captured by Planet Labs PBC and analyzed by The Associated Press showed the bridge still standing as of noon Monday.

Another image, taken Monday, showed nearly 50 Russian military helicopters at Stary Oskol, a Russian base close to the Ukrainian border and some 175 kilometers (110 miles) northeast of the Ukrainian city of Kharkiv.

Highlighting the toll of the war, Ukrainian President Volodymyr Zelenskyy said Monday that at least 220 Ukrainian children have been killed by the Russian army since the war began, and 1,570 educational institutions have been destroyed or damaged. He also noted that some people trying to escape the fighting are afraid they’ll be taken to Russia or Russian-controlled areas.

More than 1 million people, including nearly 200,000 children, have been taken from Ukraine to Russia, Russia’s Defense Ministry said Monday, according to state-owned news agency TASS. Defense Ministry official Mikhail Mizintsev said that number included 11,550 people in the previous 24 hours, “without the participation of the Ukrainian authorities.”

Zelenskyy said that the U.N. assured him people fleeing Mariupol would be allowed to go to areas his government controls.

Separate from the official evacuations, some Mariupol residents left on their own, often in damaged private cars.

As sunset approached Monday, Mariupol resident Yaroslav Dmytryshyn rattled up to a reception center in Zaporizhzhia in a car with a back seat full of youngsters and two signs taped to the back window: “Children” and “Little ones.”

“I can’t believe we survived,” he said, looking worn but in good spirits after two days on the road.

“There is no Mariupol whatsoever,″ he said. “Someone needs to rebuild it, and it will take millions of tons of gold.”

Associated Press journalists Inna Varenytsia and David Keyton in Kyiv, Jon Gambrell and Yuras Karmanau in Lviv, Mstyslav Chernov in Kharkiv, and AP staff around the world contributed to this report.