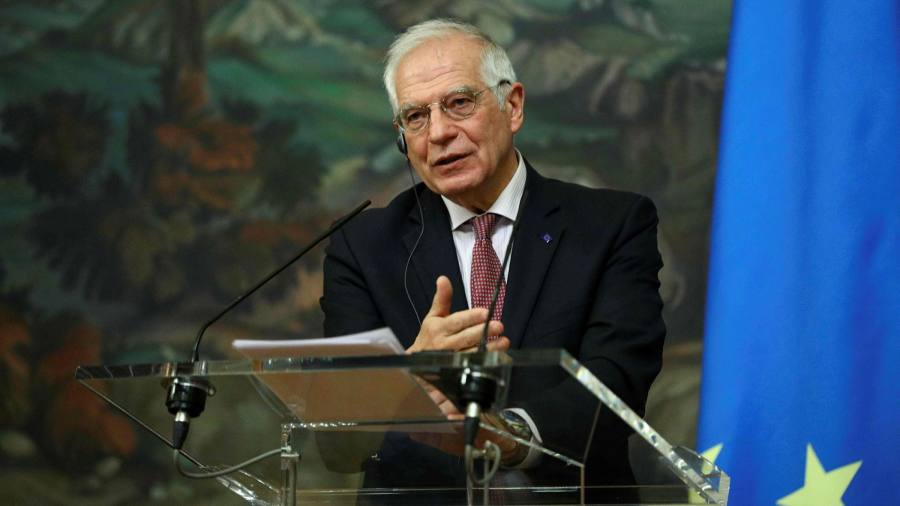 Moscow has ordered the expulsion of three European diplomats, one each from the German, Polish and Swedish delegations to Russia, accusing them of participating in protests in support of jailed opposition leader Alexei Navalny.

The move came during a visit to Moscow on Friday by Josep Borrell, the EU’s foreign policy chief.

Borrell said he was “really upset” by the expulsion plans, which caught him off guard. They were reported by Russian media outlets in the midst of talks with his Russian counterpart Sergei Lavrov.

“We reject these allegations,” Borrell told reporters, saying he had “refused and rebutted” the claims during his meeting with the Russian foreign minister. He also said diplomatic convention permitted diplomats to observe events such as protest rallies.

Borrell said Lavrov had told him the expulsions were due to be announced on Monday but had been inadvertently leaked to the press.

In a statement confirming the move, Russia’s foreign ministry said the diplomats’ alleged participation in the rallies was “unacceptable and inappropriate for their diplomatic status”.

The expulsions capped a difficult visit for Borrell, the first senior EU official to travel to Russia since 2017. The talks failed to produce any tangible successes in efforts to free Navalny, but pleased Moscow after Borrell called for the EU to approve Russia’s state-developed Covid-19 vaccine.

At a press conference following the talks with Lavrov, Borrell said confirmation of the high efficacy of the Sputnik V jab was “good for all mankind, it means we will have more tools to fight the pandemic”.

“I hope that now the European Medicines Agency will be able to certify this vaccine for use in the EU member states,” he said. “This will be good news for us, because, as you know, we do not have enough vaccines and an additional source of their supply is only welcome.”

The European Commission is under fire for a slow rollout of Covid-19 vaccines with the bloc lagging behind other major powers and failing to secure sufficient jabs. In a study published in The Lancet this week, Sputnik V was found to have an efficacy of 91.6 per cent.

The Russian jab attracted controversy and some international criticism when president Vladimir Putin approved it for use this summer before it had even completed early-stage testing. The endorsement by Borrell, the EU’s foreign policy chief, comes after French president Emmanuel Macron said this week that he was open to using it received EMA approval. Germany said it was in talks to potentially help with finding production sites for the jab in Europe.

Borrell’s visit comes just two days after Russia jailed Navalny for more than two-and-a-half years and amid a brutal police crackdown on peaceful protesters who have rallied against his detention, which supporters say is an effort by the Kremlin to silence criticism.

He said he had reiterated the bloc’s demands for the release of Navalny and a full investigation into his attempted assassination last August. But Borrell stopped short of warning Moscow of any consequences if it did not comply and said there were no calls from any member states for additional sanctions in response.

“We have to recognise that over the last years, our relations have been marked by fundamental differences and lack of trust,” Borrell said. “We see each other more as competitors and rivals than partners.”

“The European Union is an unreliable partner,” Lavrov said. “Further degradation of ties is fraught with negative and very, very unpredictable consequences.”

Moscow began talks with the EMA last month about the approval of Sputnik V and the process is at an early stage. The EMA is independent of the European Commission and Borrell has no formal role in the bloc’s vaccine procurement procedure.

Hungary was the first EU member state to approve Sputnik V, using national emergency measures to allow it to be used temporarily, and prime minister Viktor Orban has said doses could start to be administered next week.

The Borrell-Lavrov talks, which continued after the press conference, also focused on the conflict in Ukraine, the Iran nuclear deal, climate change, the Middle East and co-operation in areas such as anti-terrorism and combating drug trafficking.

While the visit has stoked opposition from a group of EU member states close to Russia’s borders, including Poland and Baltic countries, the decision to go ahead reflects the bloc’s splits on policy toward the Kremlin.

Some member states are keen to find areas of mutual co-operation with Russia despite years of souring relations and confrontation stemming from Moscow’s annexation of Crimea in 2014, allegations of Kremlin-ordered assassinations in European countries and attempts to meddle in member state elections.