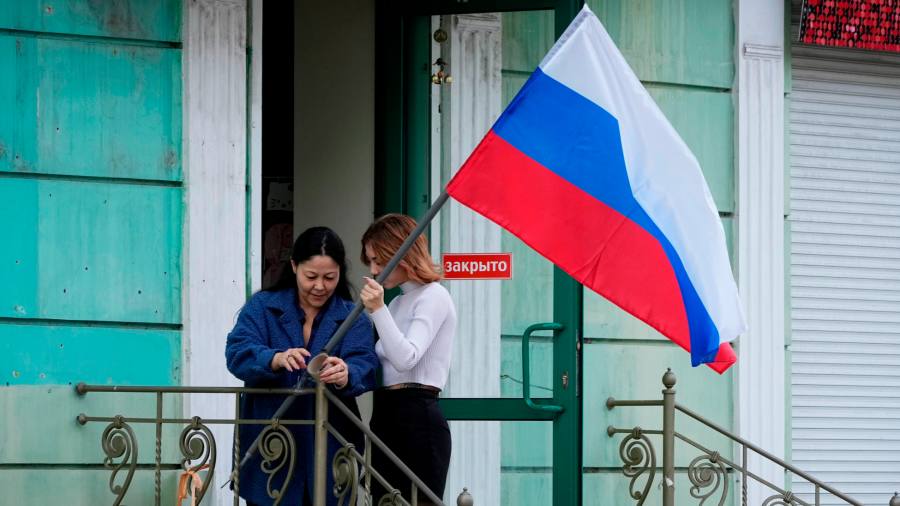 Vladimir Putin will annex four regions in south-eastern Ukraine — none of which Russia fully controls — on Friday, in a substantial escalation of the conflict with Kyiv.

Dmitry Peskov, the Russian president’s spokesman, said on Thursday that Putin would sign “treaties” with Russia-appointed occupation officials and make a “substantial speech” during the ceremony in the Kremlin, state newswire Ria Novosti reported.

Russia’s forces held highly stage-managed votes last weekend in parts of Ukraine’s Donetsk, Luhansk, Kherson and Zaporizhzhia regions under its control, claiming locals had overwhelmingly voted to join Russia by margins of up to 99 per cent.

Ukraine and its western allies have refused to accept the “sham referendums”, which were in some cases run by armed “brigades” that brought ballot boxes to locals’ homes.

“The territorial integrity of Ukraine will be restored. And our reaction to Russia’s recognition of their results will be very harsh,” said Zelenskyy in a telephone call with Italy’s outgoing prime minister, Mario Draghi.

European Commission spokeswoman Dana Spinant on Thursday said: “We will never accept any annexation of territory or any land-grabbing by Russia.” She added: “We are ready to make the Kremlin pay a hefty price for this new escalation in the conflict.”

Putin’s decision to annex the territories — the largest forcible takeover of territory in Europe since the second world war — is an attempt to raise the stakes seven months into his full-scale invasion of Ukraine.

A plan to topple Ukraine’s government in a matter of days failed spectacularly as Russia’s troops suffered substantial losses, while supplies of advanced western weaponry helped Ukraine mount a counteroffensive in the north-east in recent weeks.

In a fiery speech last week, Putin threw down a gauntlet to the west, vowing to use all weapons at his disposal — including nuclear — if Ukraine continued its offensive to reclaim what Putin now declares is part of Russia, and mobilised the army’s reserves to bolster the 1,000km front line.

That decision has sparked a domestic backlash, prompting hundreds of thousands of people to flee the country.

In a sign that the Kremlin is concerned about the criticism, Putin acknowledged on Thursday that “mistakes” had been made in calling up people who did not have military experience or qualified for exemptions.

By laying claim to large parts of the region held by Ukraine, the annexation also commits Putin to continue fighting the war.

He has defined Russia’s goals for the invasion vaguely but insisted throughout that “liberating” the Donbas, the industrial heartland comprising Donetsk and Luhansk, was the minimum priority.

Western nations have vowed to continue providing military support to Ukraine as its army seeks to recapture the territories now under Russian control, despite Putin’s threats.

Privately, however, the US and its European allies are concerned that Russia could use tactical nuclear weapons in Ukraine and have warned Moscow about the consequences of using them.

Dmitry Medvedev, a former stand-in president for Putin who is now deputy chair of Russia’s security council, wrote on Tuesday that Russia could probably get away with a nuclear strike against Ukraine because the west would be too scared of the potential consequences to retaliate. 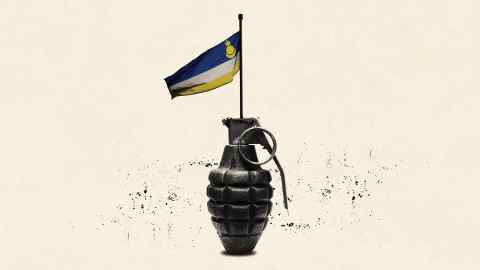 “This puts us in a place where some wise decisions need to be made, and I don’t think just within the alliance but also in Moscow,” said a senior Nato official on Thursday. “It is probably time for people to think very carefully about what they are doing. And where the path goes.”

Nato has said all members of the 30-strong military alliance “remain resolute in providing political and practical support to Ukraine as it continues to defend itself against Russia’s aggression”.

“Nato allies will not recognise [this] illegal and illegitimate annexation,” it said in a statement. “These lands are Ukraine. We call on all states to reject Russia’s blatant attempts at territorial conquest.”

The move comes as Nato vowed a “united and determined” response to attacks on critical infrastructure used by the military alliance, such as the sabotage of the Nord Stream gas pipelines from Russia to Germany. While no blame has been attributed to Tuesday’s attack, which blew four holes in the gas pipelines under the Baltic Sea, it has sparked a war of words between Moscow and western capitals and a significant escalation in fears over Europe’s energy supplies.