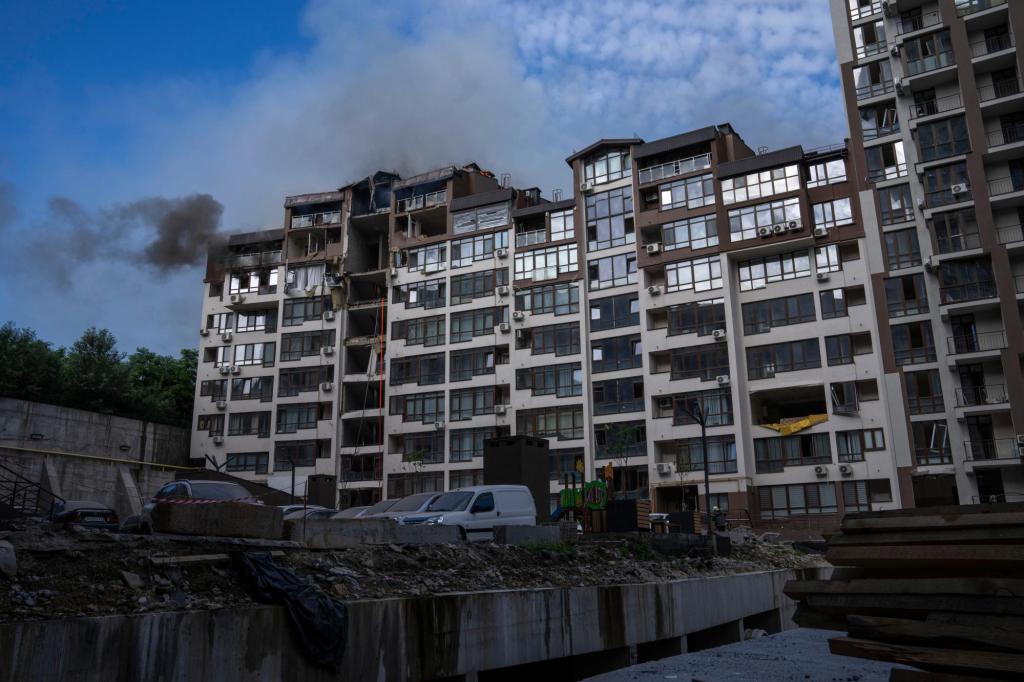 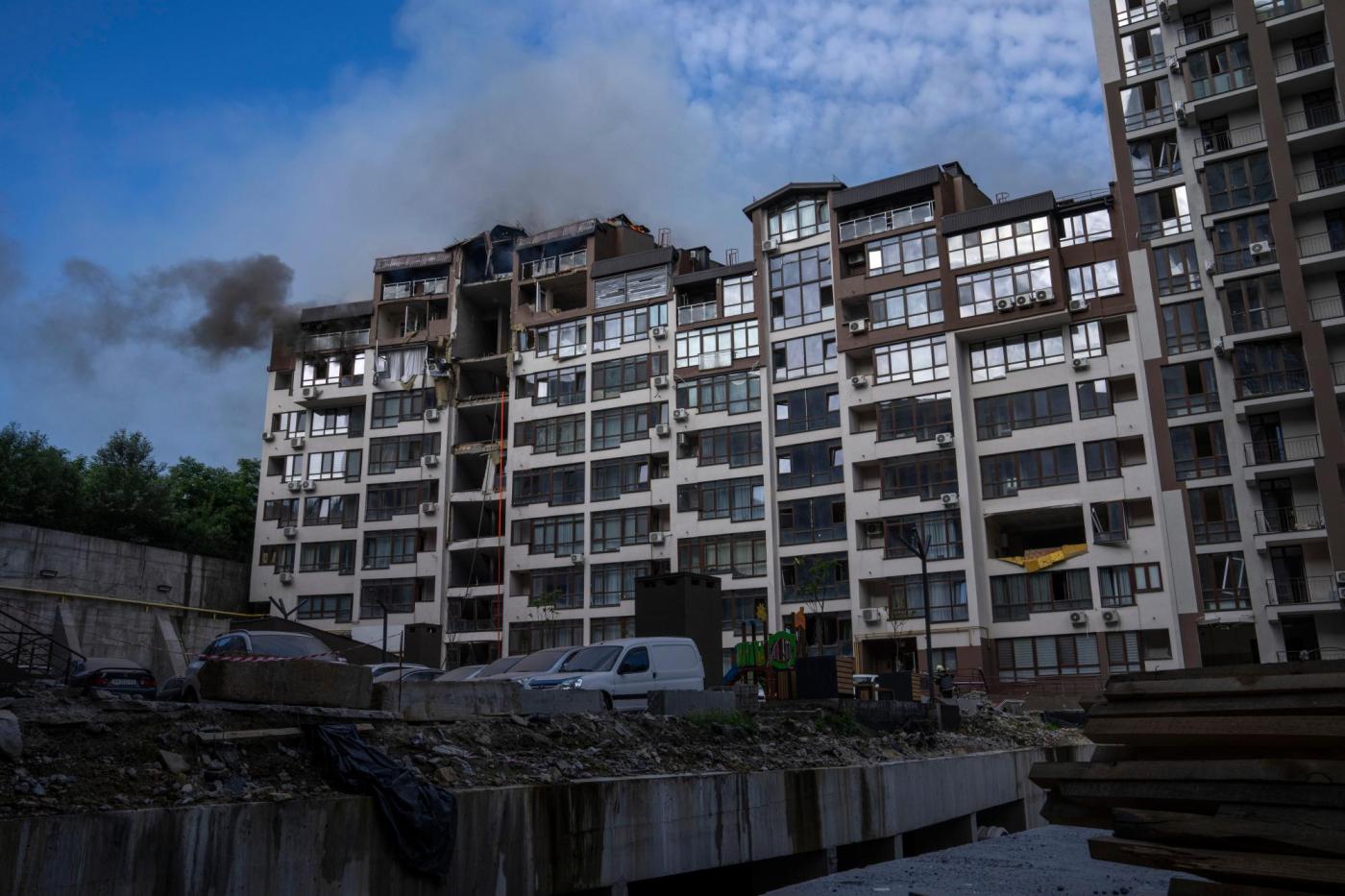 By OLEKSANDR STASHEVSKYI and JOHN LEICESTER

KYIV, Ukraine (AP) — Russian missiles hit the Ukrainian capital early Sunday, striking at least two residential buildings and killing one person, the mayor of Kyiv said. The attack came as Western leaders meeting in Europe this week prepared to reaffirm their support for Ukraine and condemnation of Russia.

After conflicting early casualty reports, Mayor Vitali Klitschko said one person was killed and six injured, including a 7-year-old girl and her mother, whose condition he described as moderately severe.

Klitschko told journalists that he believed the airstrikes were “maybe a symbolic attack” ahead of a NATO summit in Madrid that starts Tuesday. Leaders of the Group of Seven industrialized nations, including U.S. President Joe Biden, were in Germany on Sunday for a meeting of the world’s largest economies.

The leaders were set to announce new bans on imports of Russian gold, the latest in a series of sanctions they hope will further isolate Russia economically. Biden, while standing with German Chancellor Olaf Scholz, the three-day meeting’s host, was asked for his reaction to the latest missile strikes on Kyiv.

“It’s more of their barbarism,” he replied.

The early morning Russian airstrikes were the first to successfully target the capital since June 5. Two more explosions were later heard in Kyiv, but their cause was not immediately clear.

A member of the Ukrainian parliament, Oleksiy Goncharenko, wrote on the Telegram messaging app that preliminary information indicated that Russia launched 14 missiles toward the capital region and Kyiv itself, suggesting that some were intercepted.

In the city of Cherkasy, about 160 kilometers (100 miles) southeast of Kyiv, one person was killed and five injured in strikes by two Russian rockets, regional governor Ihor Taburets said.

A former commander of U.S. forces in Europe said the strikes on Kyiv were intended to humiliate Western leaders as they gathered for the G-7 and NATO summits.

“Russia is saying, ‘We can do this all day long. You guys are powerless to stop us,’” retired Lt. Gen. Ben Hodges, the former commanding general of U.S. Army forces in Europe, said. “The Russians are humiliating the leaders of the West.”

In a phone interview, Hodges said Russia doesn’t have bottomless stocks of precision missiles and that “if they are using them, it’s going to be for a special purpose.”

He said it was hard to say with certainty whether apartments buildings were deliberately targeted or whether missiles strayed.

Meanwhile, Russian troops fought to consolidate their gains in the country’s east by battling to swallow up the last remaining Ukrainian stronghold in Luhansk province. Luhansk Gov. Serhiy Haidai said Sunday that Russia was conducting intense airstrikes on the city of Lysychansk, destroying its television tower and seriously damaging a road bridge.

“There’s very much destruction. Lysychansk is almost unrecognizable,” he wrote on Facebook.

Lysychansk and the nearby city of Sievierodonetsk have been the focal point of a Russian offensive aimed at capturing all of Ukraine’s eastern Donbas region and destroying the Ukrainian troops defending territory not already controlled by Moscow-backed separatists.

Haidai confirmed Saturday that Sievierodonetsk, including a chemical plant where hundreds of Ukrainian troops and civilians were holed up, had fallen to Russian and separatist fighters.

Russian Defense Ministry spokesman Igor Konashenkov said late Saturday that Russian and Moscow-backed separatist forces now control Sievierodonetsk and the villages surrounding it. He said the attempt by Ukrainian forces to turn the Azot plant into a “stubborn center of resistance” had been thwarted.

Capturing Lysychansk would give Russian forces control of every major settlement in the province, a significant step toward Russia’s aim of capturing the entire Donbas. The Russians and separatists control about half of Donetsk, the second province in the Donbas.

On Saturday, Russia also launched dozens of missiles on several areas across the country far from the heart of the eastern battles. Some of the missiles were fired from Russian long-range Tu-22 bombers deployed from Belarus for the first time, Ukraine’s air command said.

The bombardment preceded a meeting between Russian President Vladimir Putin and Belarusian President Alexander Lukashenko, during which Putin announced that Russia planned to supply Belarus with the Iskander-M missile system.

Follow AP’s coverage of the Russia-Ukraine war at https://apnews.com/hub/russia-ukraine