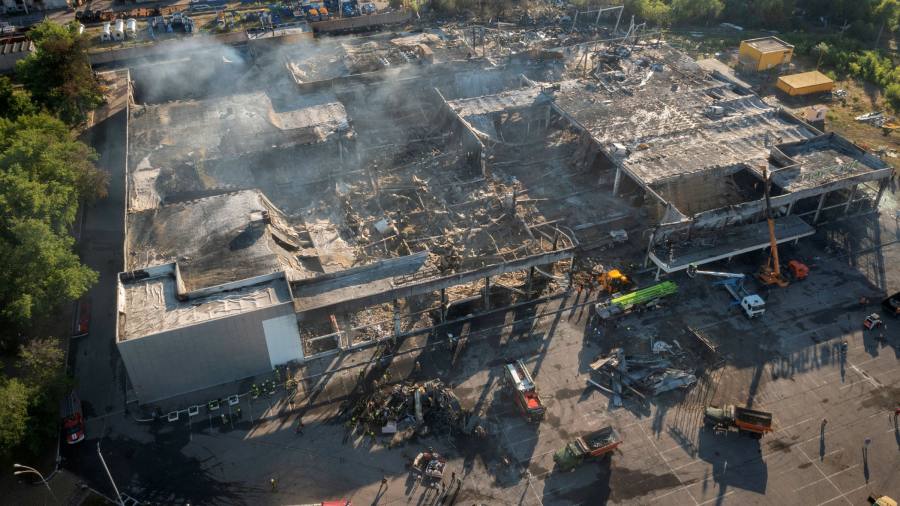 Russia’s defence ministry has admitted responsibility for a missile strike that destroyed a shopping centre in a central Ukrainian city but denied reports of civilian casualties, saying it had hit a military target.

Ukrainian officials said at least 20 people died in Monday’s air strike on Kremenchuk, 25 were being treated in hospital and 40 were missing. Rescue workers are still searching the site and authorities expect the death toll to rise.

The attack, which is likely to lead to one of the worst civilian death tolls in a single strike since Russia’s invasion of its neighbour in February, was the latest in a series of missile strikes in a conflict that shows no sign of abating.

Dmitry Peskov, spokesman for Russian president Vladimir Putin, said the war was going “according to plan” and that it would only end once Ukraine capitulated to Moscow’s demands.

“The Ukrainian side can end everything by the end of today. They just need to order Ukrainian troops to lay down their weapons and fulfil Russia’s conditions. And it’ll all be over,” Peskov told reporters.

Putin’s conditions for ending the war have been vague throughout the conflict. Peace talks collapsed in the spring as Russia hardened its stance on seizing more territory.

Ukraine’s president Volodymyr Zelenskyy said more than 1,000 people were in the shopping centre when the strike hit, describing the death toll as “impossible to imagine”.

In a speech to Ukrainians after the attack, Zelenskyy said Russia had become “the largest terrorist organisation in the world” and called for western countries to ratchet up sanctions on the country.

In the immediate hours following the strike, Russian state media and pro-invasion social media channels said it was a “planned Ukrainian provocation” staged to accuse Moscow of war crimes.

But in a rare deviation from its practice of blaming civilian deaths on Ukraine, Russia claimed it had hit a weapons depot in a factory that stored high-precision air-launched missiles to destroy US and European supplies for Ukrainian armed forces.

“The detonation of the munitions for western weaponry in storage led to a fire in a non-functioning shopping centre next to the factory,” Russian defence ministry spokesman Igor Konashenkov said on Tuesday.

Monday’s strike was part of an increased barrage targeted at Ukrainian cities far from the front lines in recent days. A UK intelligence briefing on Tuesday described the wave of attacks as “unusually intense”.

The latest assaults coincided with the G7 summit being held in Germany and a plea by Zelenskyy for G7 leaders to step up weapons supplies and sanctions against Russia.

US secretary of state Antony Blinken said on Monday that the strike in Kremenchuk was “the latest in a string of atrocities”.

The White House’s ambassador to the UN, Linda Thomas-Greenfield, described it as “absolutely sickening” and said the organisation’s security council — of which Russia is a member — would meet on Tuesday to “discuss Russia’s atrocities against civilians”.

Moscow has repeatedly denied targeting populated areas and said it was only firing on military facilities.

At least 4,700 civilians have died since the invasion, according to the UN, although Ukrainian officials say the toll is likely to be many times higher.