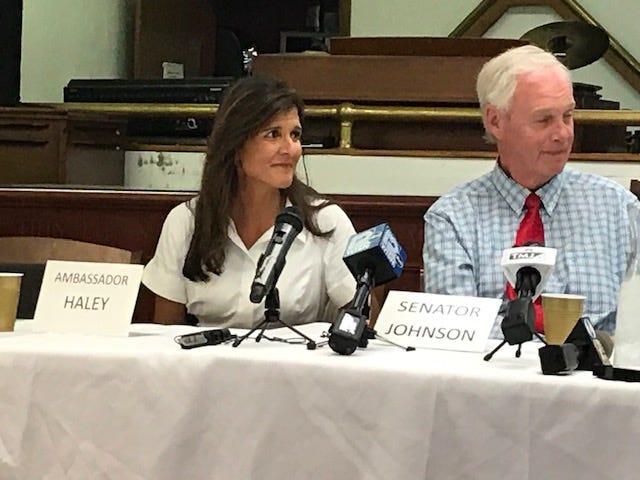 With former South Carolina Gov. Nikki Haley by his side, Republican U.S. Sen. Ron Johnson touted a faith-based inner-city jobs and training program that he has championed for several years.

The Joseph Project seeks to provide skills for those eager to gain a foothold in the workforce and then connects them with businesses.

“Aren’t you just tired of all the anger and division? God, I am,” Johnson said Tuesday. “It’s exhausting. To me, the Joseph Project shows the way of how we can unify and heal this nation. And this nation needs healing and unity.”

Johnson is in a tough re-election fight and eager to show voters an ability to work on issues outside the fractious political arena.

The program was started in September 2015 at Greater Praise Church of God In Christ. The program was forged by the late Pastor Jerome Smith Sr., and members of Johnson’s staff.

Some 865 people have gone through the four-day training program, said Scott Bolstad, who is Johnson’s outreach director.

“I will tell you, the Joseph Project is God’s work,” said Haley, who as governor instituted a program to help former offenders get jobs when they were released from prison.

“The biggest thing you can give people is confidence,” said Haley, who served two years as U.S. Ambassador to the United Nations.

She encouraged those who have succeeded at the Joseph Project to pass on their stories to others.

“This is a gem in Wisconsin’s pocket that has only begun to see the light of what it can do,” she said.

Several alumni of the program, which has since spread to Wausau and Green Bay, spoke highly about the initiative.

Janis Long of Wausau said she found the program after leaving prison for the third time.

“I needed something to work,” she said.

Long landed a job at Crystal Finishing Systems, a manufacturer, where she has worked for five years.

Philip Coleman, of Milwaukee, said the program “changed my whole perspective on life.” He found the program, he said, after spending 13 years in prison. He has been employed at Denali Ingredients Inc., in New Berlin for close to two years.

Coleman said his mother died June 7 but he “felt a little at peace in the fact she got to see me live a legitimate life.”

After the hourlong presentation, Johnson and Haley did not take questions from the media.