Reyel Simmons of Minnesota sentenced for posing as a federal agent 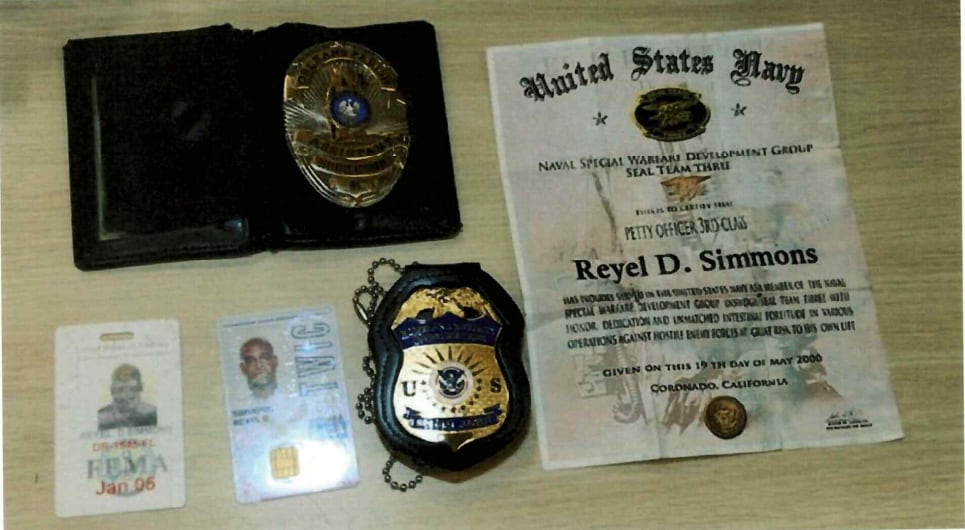 Over the course of eight months, a woman dating Reyel Simmons had been charmed by his tales of taking down bad guys as a Department of Homeland Security agent and retired Navy SEAL. She had seen Simmons’s “go bag,” badges and guns; heard stories about his undercover assignments; and believed DHS was paying for their hotel stays — a perk of said covert missions.

But her relationship with Simmons came crashing down in August, when she spotted a comment on his TikTok account, where he posted videos about being a federal agent for nearly 10,000 followers. The comment read: “stolen valor — impersonating a police officer again, oh and can proof be provided!”

Her discovery started a chain of events that eventually led to Simmons’s arrest and conviction on charges of impersonating a federal officer and illegally possessing firearms as a felon. On Friday, the 53-year-old Minnesota man was sentenced to six years in prison that will be followed by three years of supervised release, according to the Department of Justice.

The woman dating Simmons became suspicious about his work as a federal agent after reading the comment about stolen valor, so she contacted the TikTok user who posted it, according to a criminal complaint filed in the case. The commenter, identified as “J.S.” in the complaint, revealed they were Simmons’s former co-worker.

That’s how the woman discovered that Simmons — who at the time was using the fake name “Rey Reeves” — had a prior arrest for impersonating an officer when he lived in Colorado. She then called the FBI to report Simmons.

The FBI found no evidence that Simmons had served in the military or with any law enforcement agencies, court records state.

Nevertheless, when applying to his current job in Minnesota, Simmons had falsely stated that he was employed by DHS between 1997 and 2000, although he claimed “Assignments cannot be discussed under: Classified #CFR 6AUS06 and #USCS 987USf1310,” according to court documents.

Those codes of regulations and federal statutes don’t exist, FBI special agent Tricia Whitehill wrote in the complaint. DHS was created in 2002, years after Simmons claimed he had worked there.

In her investigation, Whitehill discovered that Simmons had been charged in 2004 with two counts of misdemeanor impersonation of an officer in Colorado. His record also showed he had been convicted of felony menacing in 2007 — a crime that prohibits him from owning a gun. Nevertheless, a neighbor reported that Simmons had built a firearms range in his backyard and that gunshots had rung out from the property.

The agents then executed three search warrants: one for Simmons’s truck; one for his house; and another for his workplace at a photography company’s office, where he was eventually arrested.

Inside the vehicle — which was outfitted with a siren and a loudspeaker — they found a rifle case, stun gun and “law enforcement-type baton,” according to the complaint. At his house, officials said, they seized eight weapons — many of which were found inside a secret bunker with a hidden doorway.

Agents also recovered a Navy uniform and clothing branded with the names of law enforcement agencies, court records state. When they arrested Simmons at the office where he was a safety coordinator on Sept. 20, the agents found his supposed “go bag” — complete with a handgun and fake badges and a Navy certificate recognizing his participation in “operations against hostile enemy forces.”

Simmons was indicted on Oct. 12 and entered a guilty plea on Jan. 21, according to court records.

When reached by The Washington Post early Tuesday, James Becker, Simmons’s public defender, forwarded a sentencing memorandum submitted May 20 in which he had requested a two-year prison term. In it, Becker wrote that, while deceitful, Simmons’s actions weren’t “prompted by a larger criminal purpose, such as financial enrichment, to gain access to law enforcement systems/investigations, or to advance any other kind of criminal enterprise.”

“In truth, Mr. Simmons was merely playing dress-up to impress people around him and to woo women,” Becker wrote.