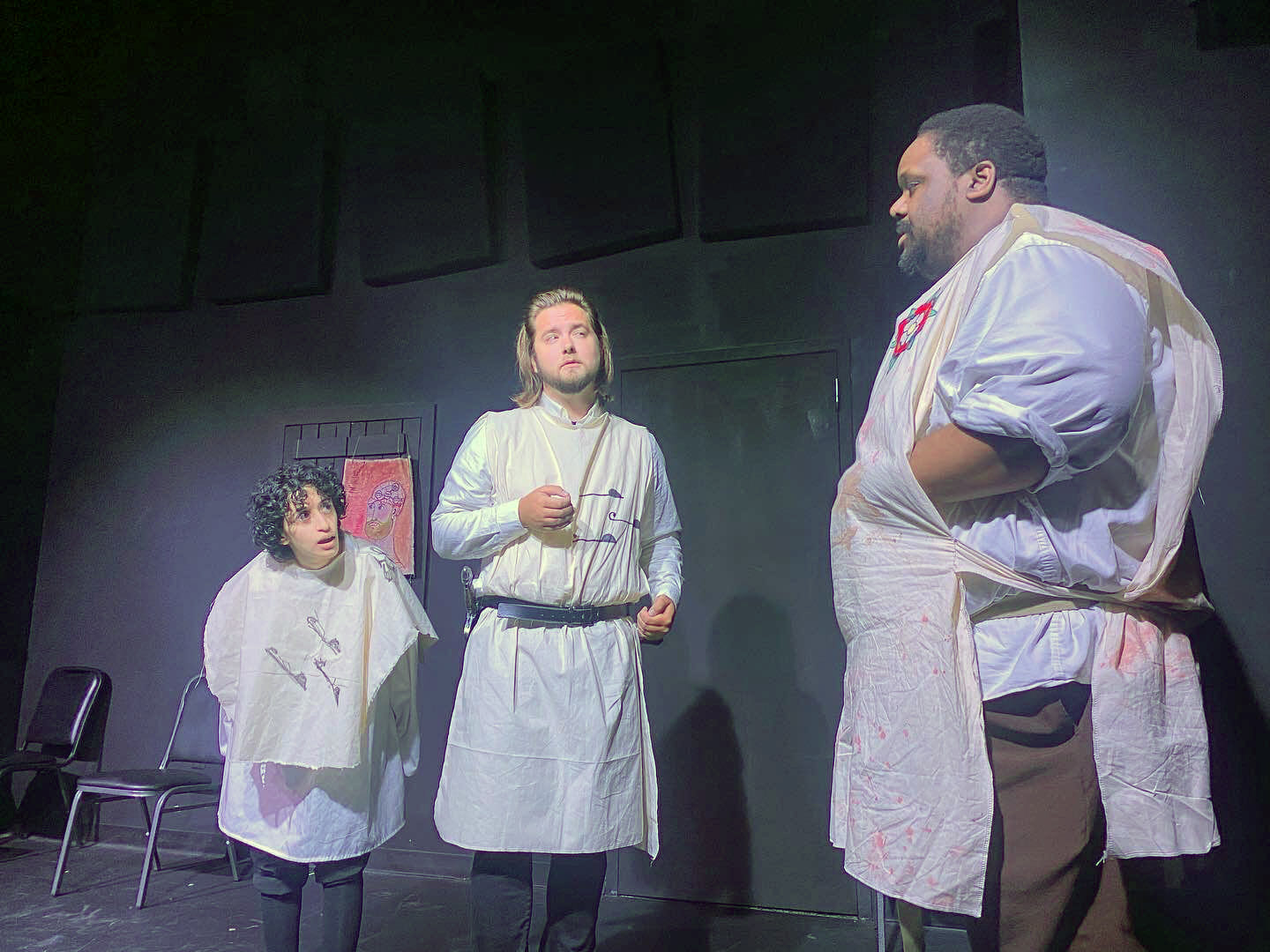 I wasn’t sure what to expect when I arrived at the Village Theatre for the latest installment of Medieval ER, an ongoing improvised comic soap opera about a group of dangerous English doctors during the late 1400s. It was certainly an intriguing premise, and the robust audience turnout suggested the show, being presented on Fridays through July 29, is proving popular. But I nevertheless took my seat wondering if a group of local jokesters could maintain an entire evening of wholly improvised comedy about Dark Ages docs.

Launched under Lenny’s Bar in 2008, Village Theatre relocated to its current location in the Old Fourth Ward’s Pencil Factory complex in 2011. Also home to fellow improv troupe Dad’s Garage, the area is prime for such theatrical hijinks, located in convenient proximity to Georgia State University with its youthful vigor and Auburn Avenue’s always-energized nightlife.

From a conceptual standpoint, the hospital soap opera format is ideal for parody — the monotonous melodrama of shows such as Grey’s Anatomy, General Hospital and St. Elsewhere makes for easy riffing in the hands of any adept wisecracker, and the added savagery of medieval medical practices opens infinite opportunities for depraved hilarity. But improv comedy hinges on all the players working off of an unspoken understanding of the scene’s underlying structure, and it’s here that the soap opera comes in handy. Soap operas by their nature are meant to give the appearance of maintaining intricate, interwoven plots and significant character development while in reality often going nowhere of consequence and recycling the same formulas in such a manner as to allow new viewers to instantly pick up on the storyline. If the Village Theatre cast could exploit this banality to its benefit, I reckoned, the actors just might be able to pull this off.

Each performance of Medieval ER begins by establishing that week’s fictional medical condition, which is chosen at random based on verbs and body parts shouted by the audience. This time the malady ended up being the heretofore unknown Swimming Adam’s Apple Disease. From there Hildegard von Blingin’s and Whitney Avalon’s bardcore rendition of Bonnie Tyler’s “Holding Out for a Hero” serves as the episode’s theme song, whisking the audience away to a hospital ward that is at once familiar and surreal.

It was an eccentric crew to be sure, but one that played off one another well, finding the kind of well-worn rapport that most ensemble casts achieve after many more performances.

The humor was bawdy, morbid and largely unprintable, spawning laughs that came fast and furious. The confluence of the modern hospital drama and the misbegotten medical practices of centuries past were comedy gold.

The individual sketches played into one another to create an ongoing and evolving narrative with several well-realized subplots: Archibald patiently showed Jack the ropes of knightly duty, Alice failed to comprehend the differences in the intimate anatomy of men and women, Hawthorne convinced Ashley to seek spiritual enlightenment through a life of sexual debauchery, and a beleaguered patient wasted away from Swimming Adam’s Apple Disease. There were several other threads that stitched together to create the kind of intricately realized narrative structure normally associated with Seinfeld or classic episodes of The Simpsons.

“Everything is improv,” Medieval ER creator Jenny Holden affirmed after the show. “People think that they need to be funny. Actually, improv works when you aren’t trying to be funny, you’re just saying the next true thing. And when you invest in your partner in your scenes you’re going to get so much more back than you would [playing to the jokes].”

Reflecting on the show’s developmental process and Holden’s commitment to crafting a fully realized world for the characters to inhabit, Drew Turner, who plays Archibald, noted that she had done a lot of academic research into the period.

Holden spent the show’s initial rehearsals educating the cast on medical practices and diseases of the Dark Ages, enhancing the players’ understanding of the grim period. Interest spread through the ensemble like, well, a disease. “I think everyone in the cast got bitten by the bug and did a lot of independent research,” Turner added.

It was clear that they all are well bitten by the bug of improv, as well. Common sketch comedy influences among the actors I met included Kids in the Hall, Saturday Night Live and, above all, the cult classic Mr. Show. Not to compare Medieval ER to those, but the show does provoke laughs that would transfer if taped for a wider audience.

In a time when laughter is just what the doctor ordered, Medieval ER more than fills the prescription.

Jordan Owen began writing about music professionally at the age of 16 in Oxford, Mississippi. A 2006 graduate of the Berklee College of Music, he is a professional guitarist, bandleader and composer. He is currently the lead guitarist for the jazz group Other Strangers, the power metal band Axis of Empires and the melodic death/thrash metal band Century Spawn.