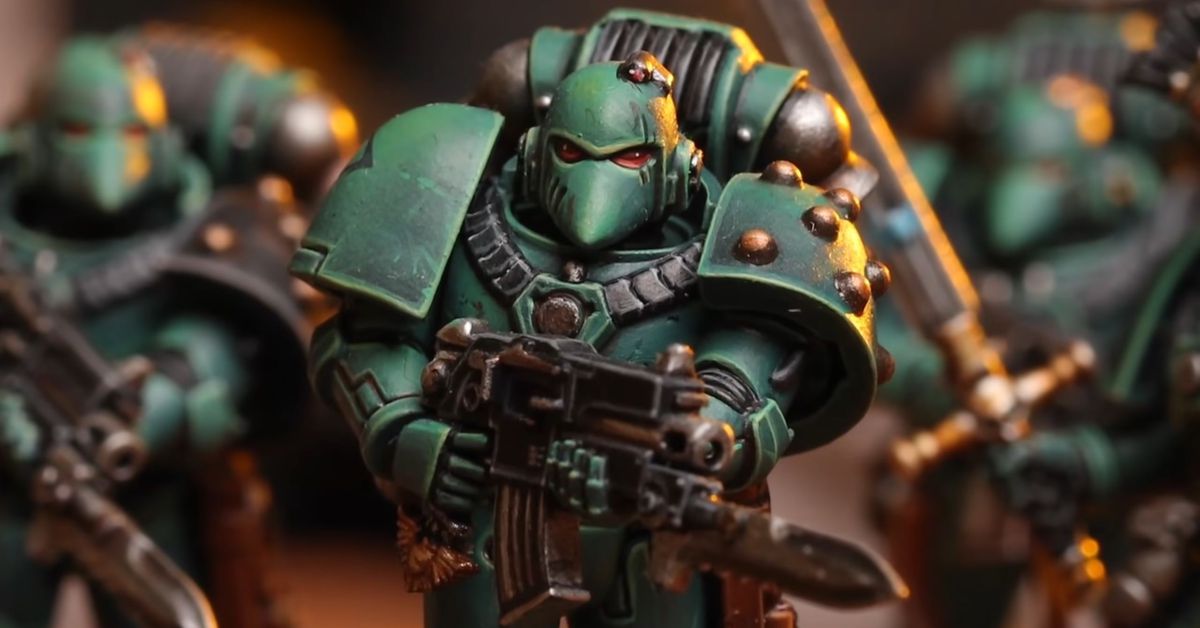 It is a truth universally acknowledged, that a person in possession of a good fortune, must be in want of a Space Marine. The trouble is that, lore-wise, Space Marines aren’t the only brutally violent and expansionist species in the Warhammer 40,000 universe. So while they’re the most popular army, they need enemies like the Tyranids and the Eldar out there in the marketplace. That way some other poor sod can buy them, build them, paint them up, and send them to their death against your Space Marines.

More is more. That’s the concept behind The Horus Heresy, a game first released in 2012 and supported by more than 60 novels in the Black Library. A decade later, a reboot for GW’s sub-franchise is on the way. Polygon had a chance to check it out, and good news: It’s awesome.

The flagship product in Warhammer: The Horus Heresy is a lavish new boxed set called Age of Darkness. Inside, Space Marine fans get 52 multi-part plastic Space Marines, 42 of which are brand-new designs. Fans of the franchise will immediately recognize the “beakie” helms of their Mark 6 Corvus pattern power armor — a throwback to the original Rogue Trader: Warhammer 40,000 cover art released when the franchise was born in 1987.

The boxed set also contains the Age of Darkness Rulebook, as well as some necessary items like rulers and templates. But the cherry on top of this army are the support units, namely a giant tank and a big stompy robot. While thematically it’s all set up to make two small armies, Age of Darkness is also the equivalent of one medium-sized army. It’s pricey — $299, in fact — but it’s got everything you need to field a competitive force right out of the box. Games Workshop even threw in faction-agnostic datasheets for every unit so you can start building an army list right away. That’s right, spreadsheets aren’t just for space games, kids.

One of the features of The Horus Heresy that always put me off was the materials used to create the bulk of its miniatures — resin. Resin is more rugged than polystyrene, which is great for the durability of your finished miniatures. But it’s not the preference of most hobbyists. Resin miniatures have to be washed in soap and water before they can be assembled, and cleaning them — removing stray bits of flashing and the little nubbins left over from when they were manufactured — requires things like metal files and lots of patience. It also tends to make the miniatures themselves a bit more expensive.

As a side effect, there’s also less of an impediment to learning the game. While every one of the 18 factions launching with this new edition offers wildly different and compelling special tactics, units, and abilities, the cores of their armies are 100% the same. It’s genetically engineered super soldiers firing armor-piercing rockets out of assault rifles all the way down. Bolters go brrr, and everyone leaves the table happier for it.

Due to the breakneck pace of the annual release schedule, I’ve only been able to assemble and partially paint the included Spartan Heavy Assault Tank. It’s my first time putting together a piece of GW armor since the 1990s, and I’m here to tell you that it’s been a tremendous experience so far. Everything fits together like a glove with some Tamiya extra-thin cement, and while tank enthusiasts will gripe about the road wheels not spinning independently and the tracks themselves looking like they’ve been pulled taught by a taffy machine, it works for me. The thing separates easily into five sub-assemblies to make painting easier. Magnetization (an optional step which allows you to swap weapons out when you need to) has clearly been taken into account. There’s even a hollow section along bottom of the hull to place a bit of ballast in there to give it more heft on the table.

Are the rules for all 18 factions perfectly balanced? I have absolutely no idea. The meta-layer of competitive Horus Heresy play is among the most byzantine constructs in all of gaming. The required manuals are themselves some of the largest and most expensive books in the entire Games Workshop range of products. But opening up Warhammer: The Horus Heresy – Age of Darkness feels like turning the page in a great novel by Dan Abnett and falling right onto the plains of Istvaan V. I’m hooked, and I’m excited to see where this franchise goes from here.

Warhammer: The Horus Heresy – Age of Darkness was reviewed using a retail copy provided by Games Workshop. Vox Media has affiliate partnerships, but not with Games Workshop. These do not influence editorial content, though Vox Media may earn commissions for products purchased via affiliate links. You can find additional information about Polygon’s ethics policy here.