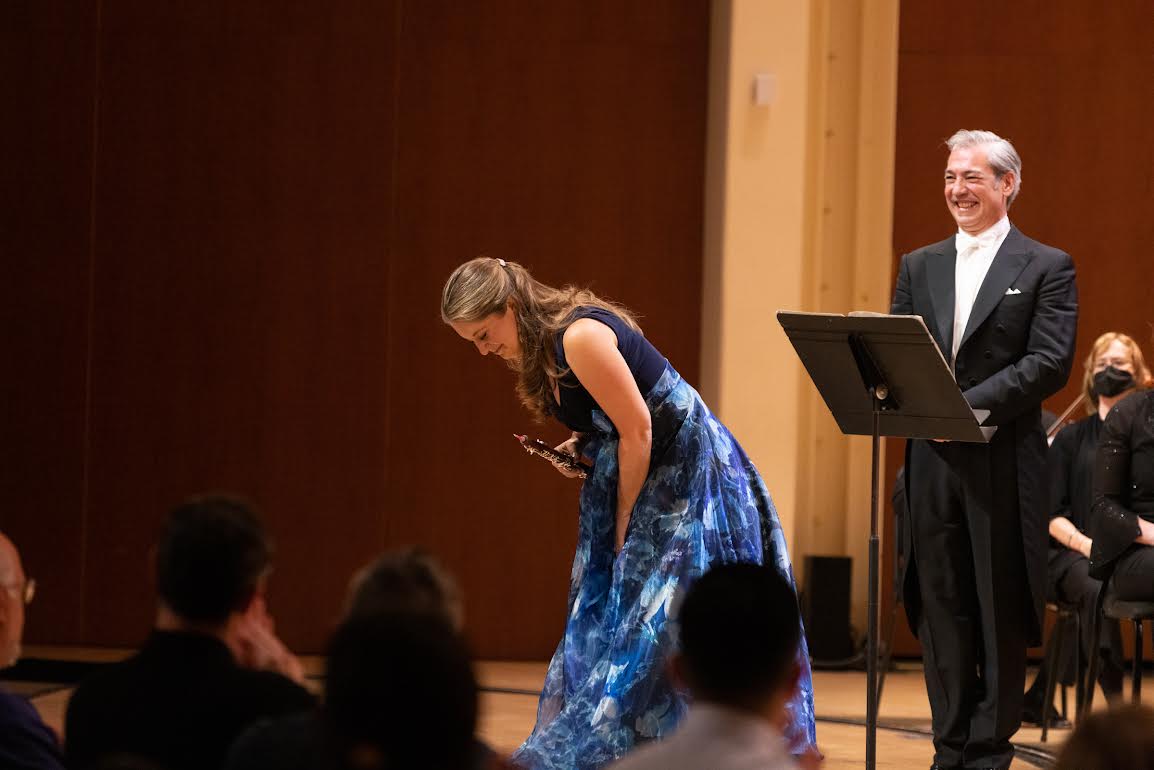 Last night’s Atlanta Symphony Orchestra performance was a reminder that the ASO is an orchestra that is in a state of flux: In addition to the outgoing music director Robert Spano making way for the arrival of Nathalie Stutzmann in the fall, the 2021-22 season is serving as a swan song for six longtime members, all of whom were honored by Spano in a special ceremony at the start of the evening’s proceedings.

Principal clarinetist Laura Ardan, violinist Sharon Berenson, cellist Dona Vellek and percussionist Bill Wilder are all bidding farewell to the ASO this season, while violinist Ronda Respess and cellist Paul Warner finished out their tenure with the 2019-20 season. Five of the honorees (with Vellek in absentia) were on stage to receive a touching tribute from Spano, as well as “golden tickets” that grant them lifetime admission to all ASO concerts.

With all this change afoot, it certainly cast an air of concern across the aura of internal cohesion that surrounds the ASO, threatening to upend the delicate Jenga tower that is a well-oiled symphony. The parting members are long-standing, integral players with a combined total of 281 years of experience in the ASO (as bassist Michael Kurth was quick to observe in his supplemental program notes.) There’s no doubt the orchestra will endure — new top-shelf talent will arrive to replace the old guard — but in the course of such a great transition, it’s reasonable to wonder what pitfalls may present within the individual concerts themselves.

In the case of last night’s concert, the orchestra seemed to exercise a considerable degree of caution by remaining elegantly understated throughout. That premise was firmly established with the evening’s opener, Elisabetta Brusa’s Adagio for String Orchestra. The piece is avant-garde from the outset, subjecting the listener to a carefully executed series of densely layered chord voicings before settling into the ominous slow burn that is the primary musical motif. The piece owes an obvious debt to the Adagio for Strings by Samuel Barber. But where Barber is bittersweet and tender, Brusa is haunted and pensive. The result is a piece that feels gloriously subversive.

Principal violinist and concertmaster David Coucheron’s solo in Brusa’s Adagio was particularly worthy of commendation. Normally one to emphasize the soaring, majestic tones in his instrument’s brighter end, here he played into the anxious aura of the piece with a withered, groaning tone that served as the ideal complement to the orchestra’s larger atmosphere.

Guest conductor Nicola Luisotti led the orchestra for the second week in a row. Luisotti’s performance without a baton left little in the way of articulation for the orchestra to follow. Conductors tend to fall into two camps: those who actively keep time for the orchestra and those who let the orchestra keep time while instead focusing on emphasizing important aspects of the overall score. Luisotti’s performance fell largely into the latter category, which was perhaps an understandable decision given the rhythmically ambiguous nature of Brusa’s Adagio. But it seemed to leave the ASO in the precarious situation of essentially conducting itself when tackling more traditional fare.

Principal oboist Elizabeth Koch Tiscione took center stage for the evening’s second piece, Alessandro Marcello’s Oboe Concerto in C Minor. Her capacity to make the instrument express the uncanny characteristics of the human voice with notes that take on the finely sculpted nuances of spoken words is consistently impressive.

It is a talent rarely seen in even the best of oboists and one that the supremely skilled Koch Tiscione employs seemingly as an afterthought. The Oboe Concerto was fine enough in its own right. But it was Koch Tiscione’s unexpected encore, a performance of “Gabriel’s Oboe” from Ennio Morricone’s soundtrack to Roland Joffé’s 1986 period film The Mission, that truly showed off her skills. Morricone, composer of some of the most iconic melodies in the history of cinema, provides ample breathing room for Koch Tiscione’s emotive phrasing. The results were nothing short of sublime, a sentiment shared by the audience in their standing ovation.

The third and final piece, Johannes Brahms’ Symphony No. 4 in E Minor, Op. 98, marked the evening’s lowest point, though hardly for any shortcomings on the part of the ASO. Brahms’ fourth symphony is easily Brahms at his most unfocused. It is a surprisingly bright and cheerful work from a composer notable for his sinister, brooding fury.

As such, Brahms seems confused and unfocused throughout the work, almost as if he finds happiness to be disorienting. Still, there were a couple of standouts. Timpanist Michael Stubbart was stirring in his thunderous command of the percussion section, and Luisotti took a great deal more initiative in his interaction with the orchestra. But on the whole, the piece is too unfocused to really achieve the greatness of Brahms’ other works.

The Atlanta Symphony Orchestra will repeat the performance on Saturday at Symphony Hall.