Review: The ASO delivers on a special and memorable “night at the opera” 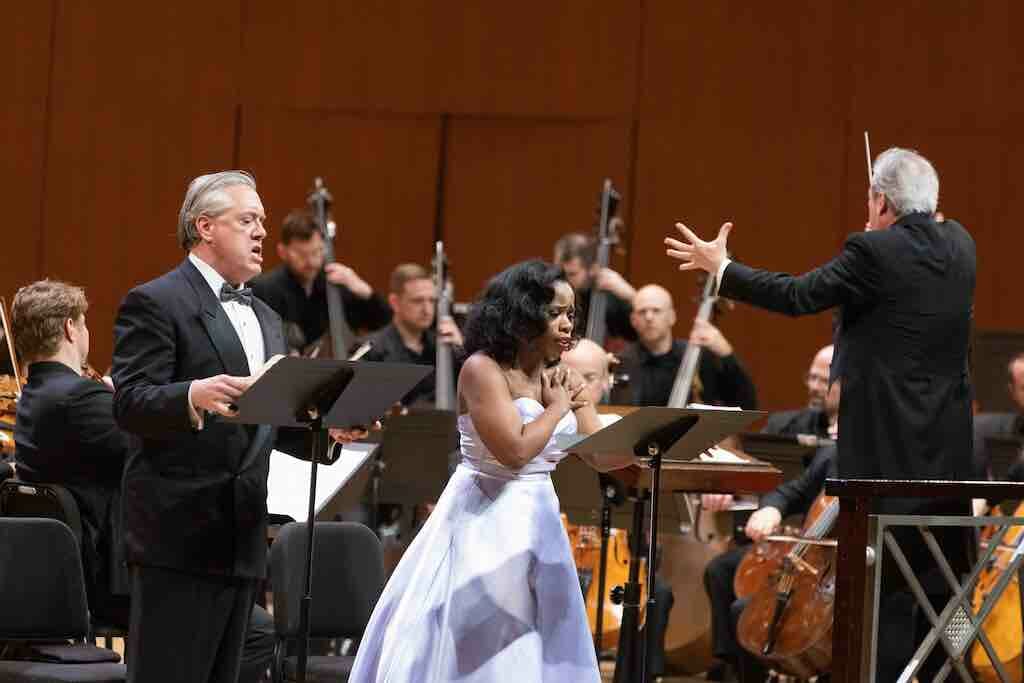 Two dads — strong-willed men who have become powerless in their own lives — seek to control their daughters’ actions and love affairs. Success would mean the fathers’ own fortunes are reversed; failure would result, of course, in their daughters’ deaths. (In both stories, there are no mothers to counsel these vulnerable young women.)

Thursday was Giuseppe Verdi night at the Atlanta Symphony Orchestra. The complete Act III of two operas, Rigoletto and Aïda, filled the program, and it repeats tonight (Friday, May 20).

On the podium, the pilot of the evening’s great success, was Italian conductor Nicola Luisotti, an opera specialist who maintains a steady international career. He’s brilliant in this repertoire, never showy for its own sake or drawing attention to any idiosyncratic interpretation. But he kept the orchestral musicians alert and got them to go beyond their usual strengths. For much of the evening, the playing was precise and supple and, at the best moments on fire, with never less than total commitment. (One might assume that Luisotti was once a strong candidate in the ASO’s music director search.)

You’d call the performance a typical opera-in-concert: some fervent acting but no sets or props and no theatrical lighting. Libretto translations were on supertitles above the stage. The singers were positioned up front, wearing gowns and formal tuxes — a very different approach from the ASO’s conceptualized, ritualized “theater of a concert” that held sway under former music director Robert Spano’s two-decade tenure.

By performing just Act III of each opera, the show doesn’t take us through the development of plotlines or the psychology of how Verdi’s well-drawn characters arrive at such complex entanglements. Instead, we step straight into the overheated emotions and the fragile (but consequential) decisions they make about survival and love. For the audience, it’s drama played out entirely in the white-hot moment.

The third and final act of Rigoletto opened the evening. Rigoletto, the hunchback court jester, is planning to have his boss, the Duke, murdered for having corrupted his daughter, Gilda. Almost immediately, we’re thrown into an amazingly catchy song about two-timing girlfriends and women as fickle as a feather in the wind. “La donna è mobile” is the lecherous Duke’s tune, sung here by tenor Santiago Ballerini as he seduces Maddalena (the assassin’s sister), sung by Denyce Graves. With a bright, silvery, Italianate ping in his voice and an air of authority (or haughtiness), Ballerini was both dashing and a little creepy, a man certain that his wicked actions bear no consequences.

Not so many years ago, mezzo-soprano Graves was the global standard in Carmen, and she can still elevate a smaller part in recent roles — like the haggard, horrible mother in Marnie at the Metropolitan Opera — into an unforgettable star turn. As Maddalena, we caught glimpses of her famously sultry low notes and her sharp-edged personality.

Baritone Stephen Powell has a long history with the ASO — most recently as the boisterous father in Hansel and Gretel in December — and he delivered Rigoletto with a commanding presence. We know the jester, in his job, is cruel and tormented but, at home, loves his daughter — all facets of his complex persona. Powell gave us these elements with his sturdy, high-lying baritone. Bright-voiced bass Burak Bilgili, another Atlanta Opera and ASO regular, sang a wonderful Sparafucile, the assassin with a strong moral compass. (“I would never kill my client!” he tells Maddalena when she suggests murdering Rigoletto instead of her new lover, the Duke.)

As Gilda, soprano Jasmine Habersham was radiant in voice, and by temperament and perhaps training she was much more convincing than the last time I heard her, as an unsteady Cleopatra in Handel’s Giulio Cesare at The Atlanta Opera this past November.

It all came together fetchingly in the quartet, one of Verdi’s first great musical achievements, weaving together so many conflicting emotions and heated passions. With the orchestra never holding back, Luisotti made it all sing.

After intermission we met a few new singers for Aïda. Act III is the penultimate act, when the intertwined political and romantic aspects of the opera come to a head. Who will win the battle between Egypt and Ethiopia? Will the Egyptian commander and the enslaved Ethiopian princess, lovers in secret, find eternal bliss in each other’s arms?

As the title heroine, lyric soprano Michelle Bradley had a big, glossy voice, a powerful instrument that could soar over the top of the orchestra, and do it with subtle shadings in phrasing and color. But here she sang the notes and not the words — you almost never heard a consonant — so we only got half of a characterization.

Still, Bradley’s Nile scene, where Aïda wonders if she’ll ever see her homeland again, was pessimistic and poignant and rapturously delivered. In music, you hear and feel the warm night, with cicadas and a gentle breeze, the air perfumed with flowers. A lot of that imagery comes from soloists in the orchestra, most exceptionally from oboist Zachary Boeding, his lines liquid and arabesque and supported from below by bassoonist Andrew Brady.

As her controlling father, the Ethiopian king, baritone Reginald Smith Jr. uses severe moral blackmail to get Aïda to betray her lover. Smith had the most intense presence of the entire evening, full of fury and poetry. With a face and manner no less expressive than his handsome voice, he was an ideal singing actor. You totally believed his every word. You’d have sold out your lover, too, if Smith’s iron will compelled you to do it.

As the opera’s ill-fated hero, Radamès, heroic tenor Clay Hilley offered his own charms. Like Bradley, his huge voice sailed over the orchestra at full tilt and, like Bradley, he projects a glorious river of sound but not a sharp character portrayal. Yet as the two lovers embraced and pledged their love and hatched an escape plan — moments before she tricked him into disclosing military secrets — their tormented humanity seemed to rise above all else. It was those sorts of moments that elevated this opera-in-concert to one of the most memorable ASO performances of the season.