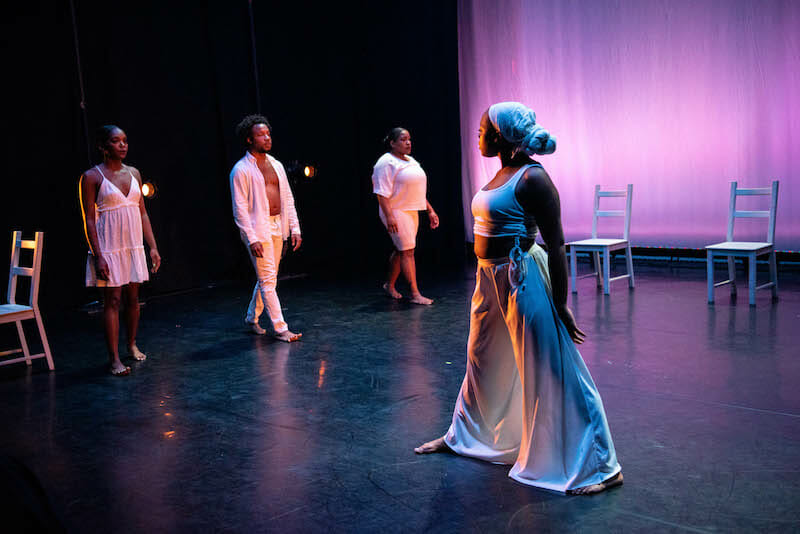 Dance company Adinkra Project’s program Revolutionary Stories, at Windmill Arts Center over the weekend, was revolutionary in unexpected ways. All six new works expressed not the revolution of politics and protest so familiar in recent years, but the radical journey toward self-love, acceptance and empowerment.

Based in Atlanta, Adinkra is just three years old. It is led by founder N.K. Condua, an American born of Ghanaian parents. The company name reflects his heritage: Adinkra is an alphabet of symbols used by the Akan people of Ghana to mark fabrics, pottery and other surfaces. The circles, triangles, hearts and half-moons of this unique writing system dance on the page, a fitting inspiration for the Adinkra Project dancers as they created shapes in space and an elegant way for Condua to honor his heritage. Ghanaian hospitality was on tap Sunday too — the first 45 minutes consisted of a cocktail hour with free drinks, while artisans sold jewelry and fabric creations.

Sunday afternoon’s performance opened with Jysenia Nurse standing alone center stage in a simple black dress and black and white Oxford tap shoes. She barely acknowledged the audience as she executed a few slow heel stamps. Quickly she upped the tempo, leading to a fierce flurry of beautifully delivered rhythms, all improvised.

Her percussive monologue became a duet when Morgan Lett entered and faced her, singing “Lift Every Voice and Sing.” Was it anger that fueled Nurse’s wiry energy? Whatever it was, it marked the beginning of a dynamic afternoon of primarily contemporary dance.

Nurse walked off the stage without acknowledging the audience. She wasn’t alone. The dancers didn’t offer bows or ask for audience acclaim until all the works had been performed, another indication that this was a program where self-expression was more important than performative ritual.

Second on the program was Cries Unheard, a contemporary work for six female dancers by choreographer Xavier DeMar. The dancers began by standing together in a tight circle, fluid torsos and head rolls rippling as the energy flowed from one to the other around the circle. Later, in one powerful gesture, three of them each put a hand to her throat as if throttling a cry, or perhaps the opposite — finding her voice.

A video conversation with choreographer and CalArts alumna Whitney S. Jackson preceded her We Are Who We Are. She was inspired, she said, by the idea of living in the moment, just as we are.

It would have been difficult to ascertain the message without the introduction, although there was plenty of emotion expressed. At one point, two dancers supported one another, trembling as if in tears. Community was invoked when the dancers briefly held hands or linked arms. Jackson’s movement vocabulary included deep side lunges and big, bold phrases that ate up the space.

Michaela J.’s Revolutionary Stories featured four dancers in white. They began seated on chairs, breathing as if in meditation. The movement phrases that followed were not particularly unique, but the message here was clear. The narrated accompaniment called for tolerance in a multi-racial, multi-gender, interfaith world.

Michaela J. also choreographed Being the Other, a solo for Keith Asberry set to “It’s Not Easy Bein’ Green,” the song of self-acceptance, regardless of skin color, made famous by Kermit the Frog in 1970 and sung here by Ray Charles.

The final work on the program was Condua’s Mercy for all nine dancers in the company. Nurse was again outstanding, both for her clean technique and bold delivery. In the opening video Condua explained that he lost his father and grandmother within two years of one another, and the second section of the three-part work delved into that grief. The final section was an up-tempo celebration blending contemporary dance with phrases from a playful Ghanaian social dance called kpanlogo. Moving to the thrilling rhythm of African drums, the dancers stayed low to the ground, knees bent, their bare feet in harmony against the floor.

This emphasis on footwork brought us back full circle to the tap solo that opened the program. The use of footwork and rhythm in both works traced an historical through-line of dance forms from West Africa to the United States. And it underscored the value of honoring both past and present in a person’s and people’s identity.

In the choreographed bows at the end, the women were all hips and shoulders and sass, the men bare-chested and proud. A joyful ending to a program that didn’t break much new ground in movement language but, perhaps more importantly, celebrated the revolutionary quality of self-acceptance and empowerment.

Gillian Anne Renault has been an ArtsATL contributor since 2012 and was named Senior Editor for Art+Design and Dance in 2021. She has covered dance for the Los Angeles Daily News, Herald Examiner and Ballet News, and on radio stations such as KCRW, the NPR affiliate in Santa Monica, California. Many years ago, she was awarded an NEA Fellowship to attend American Dance Festival’s Dance Criticism program.