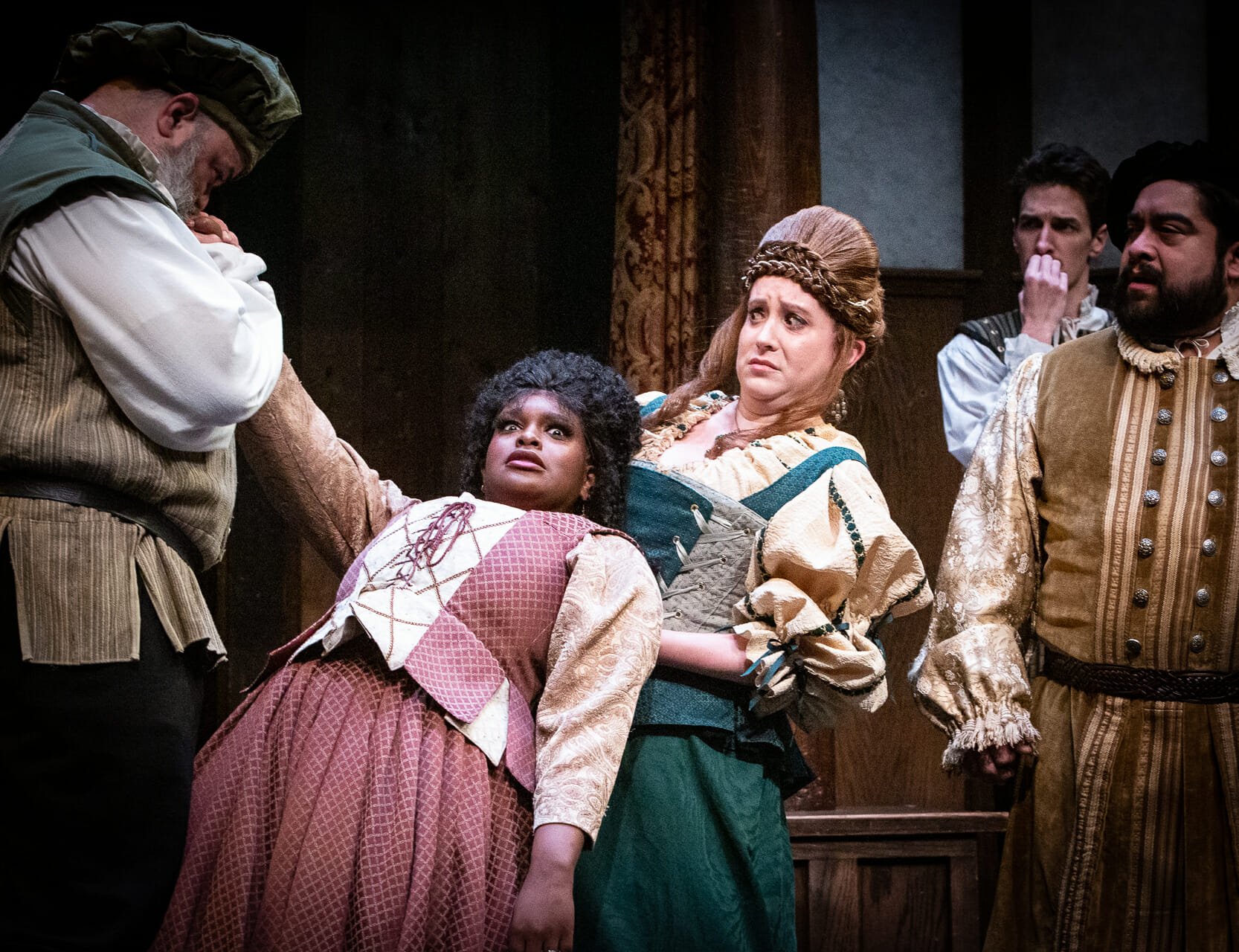 It’s fun to watch the downfall of a jackass, and Sir John Falstaff, the despicable villain from Shakespeare’s The Merry Wives of Windsor, is one of the slimiest.

In the the Atlanta Shakespeare Company’s production, onstage through May 29, actor Vinnie Mascola plays Falstaff with fun relish and oily sleaze. Almost from the beginning of the comedy, as he conspires to cheat and rob everyone in his path, the audience wants the scoundrel to suffer. And when he decides to seduce two virtuous and wealthy married women at once, his destiny is sealed.

The best things about this show are the ways the arrogant dolt experiences his torment and the two savvy women who determine the man’s fate.

Kelly Criss and Peyton Johnson, who play the title characters named Mistresses Page and Ford, have the most fun of anyone in this performance. The pair are the smartest people in the script, outwitting every man by a country mile. Their schemes to destroy the villain are full of wit. And the underlying message the two convey, that women should never be underestimated, is timeless.

Falstaff’s underestimation of the wives begins when he writes them both the same letter to arrange an affair, not knowing that they’re friends who literally compare notes. They waste no time hatching a plan. Meanwhile, Falstaff’s henchmen reveal the thief’s plans to the ladies’ husbands, causing Master Ford (Sean Kelley) to go into fits of insane jealousy and hatch a wild plan of his own.

Criss and Johnson have great comic chemistry when they share the stage, playing all their coy, delicate seduction scenes involving Falstaff with a winking, ironic sense of humor. The more they pretend to woo the man, the more they torture him — dropping him in a river, dressing him as a woman, having him flogged and worse, yet he just keeps showing up for the lustful, sexist challenge of it.

Mascola sells this lust and frustration with sheer glee. The actor is clearly having a blast with this character, marching through the Shakespeare Tavern with bravado and swiping drinks off the patron’s tables.

Criss gives Mistress Page a wary intelligence, for the character is involved in several schemes, not just against Falstaff. To contrast, Johnson provides Mistress Ford a light, game naivete and goofiness. She’s the one who has to play coy and seductive more often, pretending at innocence while terrorizing Falstaff.

In fact, everyone in the main storyline seems to be having fun with this play. This is a strong ensemble.

In particular, Kelley’s work as Ford, which involves him having to assume an identity as a kilted Scotsman with a preposterous accent, is blustering and effectively silly. Beyond that, his character’s driving emotion is the love he has for his wife, which Kelley sells. When Ford believes his wife might be unfaithful, the man is heartbroken. When he realizes that she’s scheming only to destroy Falstaff, he beams with pride.

The B-plot is less zany and, unfortunately, less compelling.

Since this is a Shakespearean comedy, there must be characters who marry by the end. All the tragedies end in death, and all the comedies end in weddings, after all. Though the characters here are mostly married, there is a subplot involving the Pages’ daughter Anne (Gabi Anderson), who is courted by three suitors.

Monson’s portrayal of Fenton is deceptive. At first, the character seems to be a one-note example of handsome, steadfast decency, outshone by the more clownish extremes of others onstage. But Monson delivers a rapid-fire, breathless, deeply complicated and funny monologue about a getaway plan near the end of the play that is one of its highlights. When he completed the showstopper, the audience applauded.

Another notable portrayal came from Alejandra Ruiz, portraying Mistress Quickly, Caius’ hopeless romantic servant. She plots as much as anyone to arrange revenge schemes and love matches, and Ruiz is rather funny.

The staging of the play, directed by Kati Grace Brown, begins awkwardly with a crowd scene involving heavy exposition in dialogue. Double-casting some of the minor characters also comes off a little confusing, at first. And the romance subplot, which grows continually complicated, slows the show down and feels like an afterthought.

So long as the play focuses on the Merry Wives of Windsor and the lusts and humiliations of Falstaff, it’s fun. Coming off the Tavern’s recent bawdy, hilarious production of The Country Wife, this play is a good deal tamer, though it delivers some innuendo. This one is more moral and upstanding, with decent folk prevailing. If that’s your bag, this show’s for you.