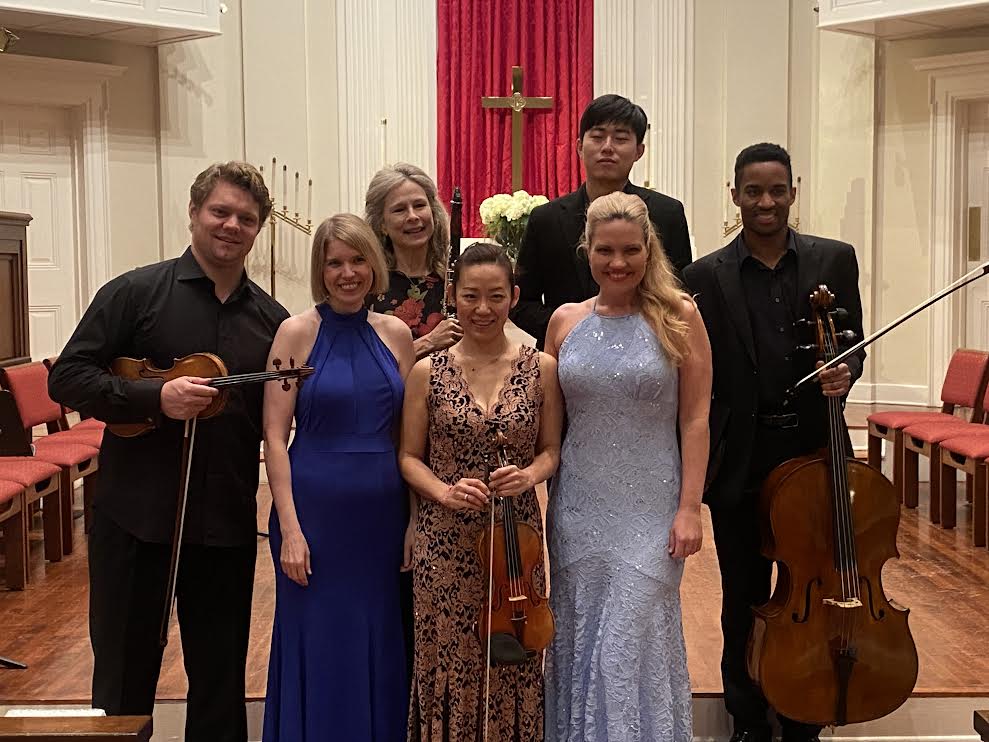 The Georgian Chamber Players convened at Peachtree Road United Methodist Church Friday evening for their first performance since the passing of founding member and Atlanta music luminary Christopher Rex. In the shadow of such a tremendous loss, it was more than reasonable to wonder how the ensemble would soldier on. Any reconfiguration of an established group will invariably alter the overall sound considerably. In the light of the loss of a lynchpin player like Rex the questions loom large: who can possibly fill his role? How will that new addition impact the ensemble’s overall cohesion?

Joyner comes to the group with notable a wealth of notable qualifications: a graduate of Juilliard’s prestigious Doctor of Musical Arts program, a founding member of the Altezza Piano Trio, performances with the Atlanta Symphony Orchestra and a recent faculty appointment as assistant professor of cello at Baldwin Wallace Conservatory along with a lengthy resume of masterclasses and guest performances. With such a commanding list of accomplishments it is unsurprising that the New York Classical Review described Joyner as “one of the most exciting young musicians on the classical scene.”

The evening began with Ardan, Shi and Pridgen delving into Wolfgang Amadeus Mozart’s “Kegelstatt” Trio K. 498 in E flat Major, and it was clear from the outset that the evening’s main antagonist was the venue’s acoustics. The Peachtree Road United Methodist Church chapel is a towering testament to the denomination’s aesthetic minimalism but as a venue for live music it leaves much to be desired. The altar area, which served as the performance’s stage, is an unadorned box which opens out into the larger unadorned box of the nave. The stiff, cubic angles of the space defies acoustic sculpting. The chamber has an overabundance of reverberation and sounds were frequently rendered indistinct beneath a wash of ambient noise. The “Kegelstatt” Trio was, nevertheless, an enjoyable opener for the evening and it allowed Ardan to showcase her fluid, commanding tone.

For the next piece, Edvard Grieg’s Violin and Piano Sonata in C minor, the Coucheron siblings paired up for a rousing duet that showcased Grieg’s penchant for writing phenomenal melodies and David Coucheron’s capacity for playing them.  While his virtuosity and technical command are undeniable, it is his role as concertmaster and principal violinist of the Atlanta Symphony Orchestra that frequently finds him carrying the key melodic aspects of various works. Heard in a smaller and more intimate venue, it quickly became apparent that his ability to navigate the tonal contours of a sustained note or deliver the most impactful phrasing of a particularly emotive passage are critical components of his playing style — and ones that he is all too ready to lean on with good natured aplomb.

For her part, Julie Coucheron showed a keen awareness of the piano’s role in the piece, one whose densely arpeggiated nature finds the instrument functioning almost more like an ambient noise generator than a proper chordal accompaniment. In the hands of a lesser player the part would risk sounding dull and unfocused but when carried out by her nimble fingers, it gave the effect of a babbling brook or a billowing rustle of leaves — just the sort of calming tones necessary to surround such a heart piercing melody.

Following the intermission Julie Coucheron was joined at the piano by Elizabeth Pridgen for another Grieg duet, this time Norwegian Dances for Piano Four Hands, Op. 35. Their tonal strengths played off one another well; Pridgen drives and pulsates where Coucheron floats. That balanced rapport makes for an excellent exploration of what is arguably one of Grieg’s most avant-garde pieces. With Grieg, a legendary purveyor of captivating melodies, it is curious to hear him deliver a percussive, chordal piece that broaches the hypnotic territory of Phillip Glass. Such an elaborate fog is dangerous territory for Grieg but was well handled by Coucheron and Pridgen.

The final piece of the evening was the premiere of Mark Gresham’s Quintet for Clarinet and Strings. Written specifically for Laura Ardan and meant to channel the clarinet quintets of Mozart and Brahms, the piece was initially composed between 2015 and 2017 with additional edits made in 2018 and 2020. Like so many things in 2020, the piece would languish in development hell due to the onset of Covid. The work itself was an enjoyable, tastefully restrained, romp through various classical traditions with occasional stabs at the modernism of more recent composers like Aaron Copeland or Ralph Vaughan Williams.

The work was additionally notable for being the evening’s only performance by Khari Joyner. For all the curiosity around the cello seat, his performance, while excellent and enjoyable, felt somewhat anticlimactic. It didn’t give him very much to do outside the confines of fairly traditional and conservative arrangements. It is, perhaps, an understandable gambit on the part of the Chamber Players to lean away from cello heavy pieces while its overall structure is in such a dramatic state of flux.

Overall the evening was a rousing success with the works of Grieg taking center stage. In the absence of Christopher Rex, the Georgian Chamber Players found themselves in a difficult and uncertain spot. But so far they’ve handled it beautifully. The ensemble has yet to post dates for their 2022-23 season but they remain, as always, a group to watch.

Jordan Owen began writing about music professionally at the age of 16 in Oxford, Mississippi. A 2006 graduate of the Berklee College of Music, he is a professional guitarist, bandleader and composer. He is currently the lead guitarist for the jazz group Other Strangers, the power metal band Axis of Empires and the melodic death/thrash metal band Century Spawn.

Streaming in October: “A Jazzman’s Blues,” “Welcome to Wrexham” and more