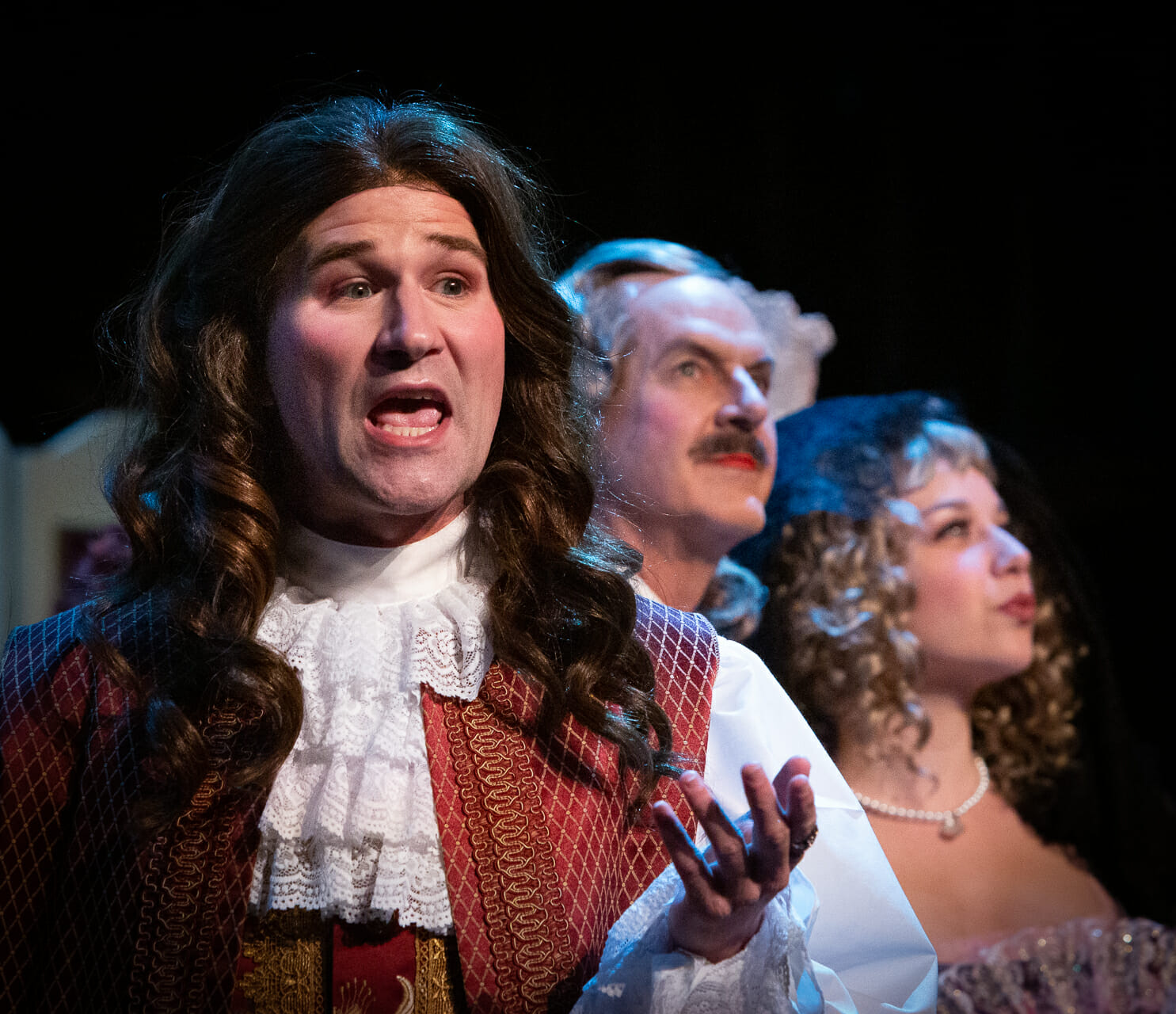 Sex is not a modern invention or cultural phenomenon. All the hand-wringing and moralizing that happens now over Lil Nas X and Bridgerton has also happened over Fifty Shades of Grey, Madonna, Larry Flynt, the Kinsey Reports and Lysistrata, all the way back to Lot’s wife. In olden days, contrary to what Cole Porter wrote, not everyone used to find a glimpse of stocking all that shocking.

At every time in history, most everyone has always been up to something. And when times are the most restrictive, people still aren’t the most well-behaved. With its new production, the Atlanta Shakespeare Company provides a damn funny reminder of that.

William Wycherley’s comedy of errors The Country Wife, onstage at the Shakespeare Tavern Playhouse through May 1, was first staged in 1675 during the reign of Charles II. Apart from the language and some expressed mindsets, though, the risks and humor in its plot seem modern.

It centers around Harry Horner (Eric Lang), an upper-class rake recently returned to London. Prior to his arrival, he had a doctor spread false rumors around town that he was rendered impotent by diseases from French prostitutes. Yes, really. As a result, noblemen won’t find him a threat to keep the company of their wives. In fact, to tease him over his new “lack of manhood” and “despising of sex,” some men like a noble named Jasper Fidget (O’Neil Delapenha) intentionally surround him with delicate wives and daughters. But this is Horner’s plan.

Soon, the “virtuous” women, including Lady Fidget (Laura Cole), are passing Horner around like a party favor, while repeating in public that his tumescence is deflated.

This leads to bawdy moments of farce, including Margery pretending to be her own brother, Harcourt pretending to be his own twin brother, clandestine letters exchanged back and forth and lots of hiding in bedrooms. There are many back-entry and misogynistic jokes, which manage to land well in spite of being tacky or shocking. In fact, there are lots of jokes, delivered with wit and speed. The best humor moment may involve Delapenha’s baffled, delayed reply to his wife’s tickle-party invitation, yet there are many funny exchanges throughout this show.

Hecke plays Sparkish’s fussy cluelessness with a particular relish. Painted, primping and preening, while dismissing every word of the insults lobbed directly at him, his performance is the most clownish and scene-stealing. Seriously, anyone staging The Scarlet Pimpernel would do well to give Hecke a callback.

Watkins is also excellent here, playing the most comparatively villainous of the characters. Pinchwife is the one most inclined to asides to the audience, reasoning out his machinations to prevent his wife’s cheating in front of us. The fact that his plans are consistently foiled anyway is a source of regular amusement. Watkins has to wrap his mind around a lot of rhythmic, antiquated dialogue delivered in different tones of voice, often in the middle of a scene, and he does good work with involved material.

Pharr’s performance is also strong, and the script places the audience always on Margery’s side. During letter-writing scenes and deceptions, the actress conveys a charming glee while the character pursues a romantic, sexually adventurous future. Playing Alithea, McDonald conveys an intelligence and amusing frustration as she is surrounded idiots and buffoons in control of her future. Cole’s work, playing a character who runs hot and cold with Horner, is also a lot of fun.

The ensemble is quite strong, as well. Even smaller roles get moments to shine.

The costumes by Anne Carole Butler and Clint Horne are lovely. Watkins designed the set, which is brightly colored and includes an old banner map of London. It’s functional, if not particularly remarkable.

The old English language of this script is probably a beast for a cast to decipher and memorize, even at a place such as the Shakespeare Tavern, so the direction by John Ammerman deserves praise. In this staging, the relationships make sense, the jokes land and the timing works. Much of this could’ve gone sideways. Instead, it’s a solid, sexed-up show.

6 Summer Trends Approved by My Grandmother