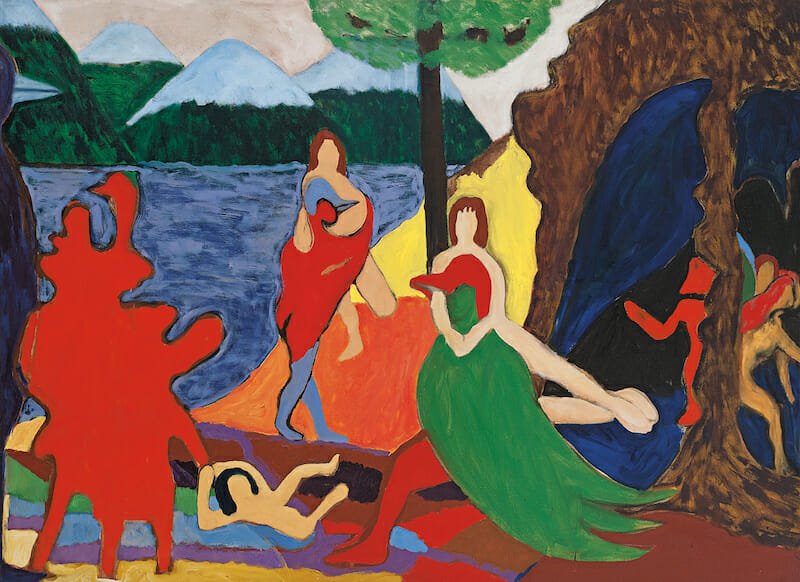 Whether they embrace or reject it, artists have long been in dialogue with the art that has preceded them. This House is Mine, the revelatory exhibition of Bob Thompson’s paintings at the High Museum of Art through September 11, celebrates an artist who was, during his brief life, one of the most dazzling conversationalists around.

The art historical giants of Western art, be they Old Masters or modern ones, spoke to him, and he responded with an outpouring of art that recast their compositions in his own vivid language, transmuting their stories into vehicles for his thoughts, experiences and fantasies.

Curated by Diana Tuite when she was Katz curator of modern and contemporary art at Colby College Museum of Art in Maine, the exhibition encompasses work made between 1958 and his death in 1966 the age of 28, less than a month before his 29th birthday. Though loosely organized by themes, the gallery experience is more like walking through an explosion of color and psychic energy, followed by a tantalizing sense of déjà vu.

Art history nerds will have a great time identifying Thompson’s many art-historical sources. Here, Renaissance artist Piero della Francesca’s The Proving of the True Cross. There, Francisco de Goya’s ghoulish Los Caprichos. Everywhere, a palette that salutes the German Expressionists and the Fauves.

But an academic background is hardly necessary to enter this world. As Thompson understood, the Bible and the Greek myths contained the sum of human experience. Anyone can relate to love, sex, brutality, fear, suffering, transcendence.

The Execution (1961), for example, is based on 15th century artist Fra Angelico’s Beheading of Saint Cosmas and Saint Damian. As he often did, Thompson borrowed the general composition, such as groupings of figures and individual postures, but he flattened the airy scene and condensed it into a mosaic of interlocking shapes. The figures are, as was typical, unclothed, with no facial features. They are silhouettes filled in with reds, blue, yellow, ocher. The one exception and the sucker punch: a black silhouette just off-center, hanging from a tree.

It is not surprising that a Black man would see in Renaissance crucifixions and martyrdoms parallels to lynching and other forms of American racial violence. Often, the references are less specific. In his hands, a peaceful harvest scene by 17th century artist Nicolas Poussin becomes the template for the shocking Untitled (After Poussin) (1964). In Thompson’s rendition, the bounty of grapes men carry on a horizontal pole becomes the dangling legs of a lavender human body.

Thompson was also attracted to themes of romance and revelry. He revisited Poussin’s Triumph of Bacchus twice, replacing the Baroque artist’s classical calm with a raucous spirit. Another Poussin painting provides the substrate for his Homage to Nina Simone (1965), one of a number of works referencing music.

Thompson was active in New York’s downtown scene, a friend of artists like Red Grooms and the jazz greats who played in the clubs he frequented. More than one musician compared his riffing on visual texts to their creative practice.

Thompson immortalized his admiration for jazz in Garden of Music (1960). He depicts Ornette Coleman, John Coltrane, Sonny Rollins and others nonchalantly playing their instruments nude in an Edenic landscape. The painting demonstrates his abilities as a portraitist, also evident in a couple of other pieces in the show. The grand scale is also notable. Thompson, it seems, chose the grand scale of European history paintings to elevate his subjects and make a history painting of his own.

For all the quotations, many paintings are mysterious, thrumming with private, sometimes sexual, ruminations. Why does his version of Manet’s Olympia, itself an update of the historic genre of the reclining nude, feature a bloody knife near a wide gash in her abdomen? What is the significance of recurring images of birds?  Who is the man with the porkpie hat? Sometimes he is engaged in the actions, sometimes a witness. Could he be the artist himself?  The work includes a full complement of monsters. Sometimes they lurk. Sometimes they attack. Are they societal or his own demons?

Thompson enjoyed early success. At 24, he joined the prestigious Martha Jackson Gallery, and supporters funded sojourns in Europe, which cemented his confidence in the direction he had chosen. Painting like a man on fire, he created more than 1000 works before his death from a heroin overdose.

Although major museums own his work and artists through the years knew and admired it, Thompson slipped from general consciousness. This is his first major museum show since a retrospective at The Whitney Museum of American Art in 1998.

It is an interesting time to resurrect him. The canon of European art history is in disrepute, especially among artists of color. If contemporary artists, like, say, Kehinde Wiley, invoke Old Masters art, they use it as an instrument of social commentary. Rupture is the more common battle cry than continuity.

Isn’t it possible to see Thompson as radical in his own way, confidently planting his flag in the currents of art history? The politics of representation notwithstanding, the admiring comments of contemporary artists and curators in the catalog affirm that Thompson still has a lot to say about art and humanity and the artistic chops to bring it home.

Catherine Fox, an award-winning art critic, co-founded ArtsATL and served as its executive director and executive editor for five years. Fox was the art critic for The Atlanta Journal-Constitution from 1981 to 2009.