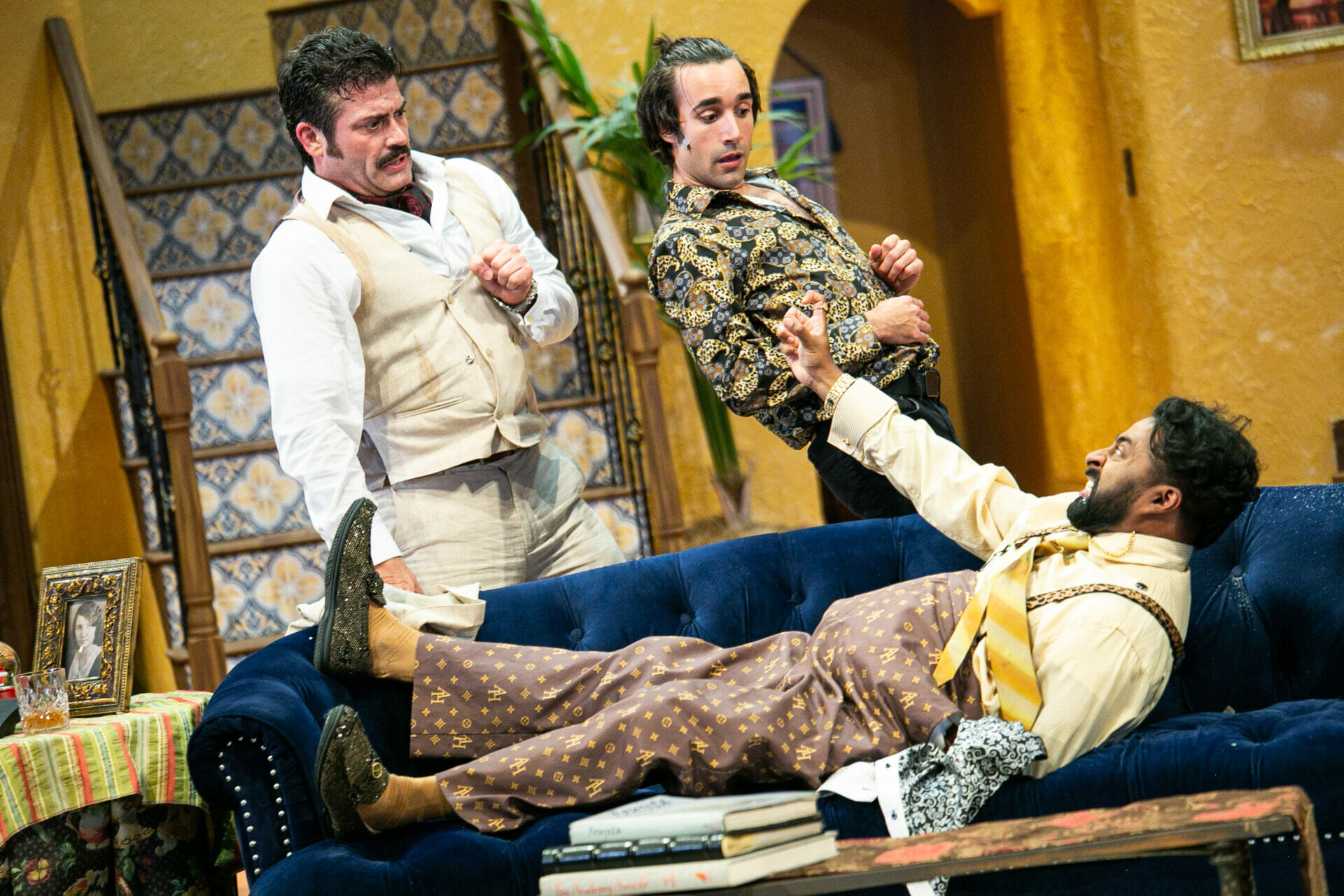 Good theater can be about riveting dramas, musicals with soaring production numbers, intimate one-person shows or more. There’s certainly room, too, for silly fare meant to do nothing more than entertain. The farcical The Play That Goes Wrong, for example, which I caught on Broadway in 2017, is one of the most enjoyable productions I’ve seen.

Aurora Theatre’s new play, Swindlers, written by first-time playwright Chris Anthony Ferrer, reminded me a lot of that show. It has that same go-for-broke mentality, but ultimately isn’t nearly as successful.

Running through June 5 at the Lawrenceville Arts Center’s Clyde & Sandra Strickland Grand Stage Theatre, the world premiere of Swindlers is kitchen-sink theater, sometimes connecting, other times missing, all at a rapid clip.

As the play opens, experienced burglar Jerry (René Granado) and his not-too-bright nephew Miles (Mark Hernandez) break into the home of a Miami millionaire. For Jerry, it’s old-hat work; for Miles, it’s new territory. As they go about scouting the house, they find what they think is a dead body, putting an obvious crimp into their plans. Before they can finish their business, they realize others are headed over for a get-together — and the thieves decide to stay and pretend to be the host and an employee.

Soon the house is full. Among those attending are Jenna (Krystal Mosley), described as a “bombshell in a nightgown” by the playwright, and her fiancé Marcus (Cristian Gonzalez); a rich Arab man (Tamil Periasamy) and his bodyguard Yasser (Marcus Hopkins-Turner); caterer Marisleidy (Rose Bianco) and her mute assistant Bertica (Irina Vazquez), who nonetheless communicates through the violin; and slightly intoxicated musician Jeremiah Clive (Chris Kayser). All of them seem to be after a $300 million diamond called the Persian Rose, and virtually no one is who he or she claims to be.

A partnership with Broadway Factor, which has produced Broadway shows such as the recent Mrs. Doubtfire and Kinky Boots, Swindlers is directed erratically by Ivan R. Lopez. Individual moments can be quite funny and the play does have an undeniable goofy charm. Yet many scenes just don’t work. At times, Lopez encourages his actors to speak so quickly it’s hard to hear their dialogue.

A bigger issue is Ferrer’s book. It strains credibility as the central pair stay in the house and continue their charade, but with material like this, a suspension of disbelief is expected. What’s harder to overlook is that most of the characters have few dimensions and some border on being stereotypes.

One sequence is particularly offensive. A gay man drops his pants and comes on aggressively to another man. The scene would have been hard to watch 20 years ago; these days, it’s cringe-inducing. All the moments in a farce tend to be heightened and overdone, but this sequence misfires.

On the plus side, the set by scenic designer Julie Ray — with her two-story mansion, artwork lining the walls, accessories mounted all around the home — is a marvel.

What’s best about this production, though, is its ensemble, some of whom are very gifted actors and comics. They are not always directed in an optimal manner but are game for the unpredictable fare. Kayser, in particular, seems to really savor his flamboyant role of Jeremiah, with his purple pants and streaks in his hair. Gonzalez and Periasamy have some choice physical moments, as well. It’s especially nice, too, to see such a diverse cast here.

Swindlers is the first show I’ve seen in the new Lawrenceville Arts Center and it’s certainly an exceptional venue — aesthetically pleasing, spacious but with an intimate feel, with very comfortable seats.

Ironically, Aurora will be staging the aforementioned The Play That Goes Wrong around the same time next year, directed by Heidi Cline McKerley. I’d like to think Swindlers  is something of a dress rehearsal for that run and that some of these performers will be in the mix.

It’s safe to say that with its high body count, a musical number, a killer animal and more, Aurora’s new play is unlike anything else on local stages now. It all comes fast and furious, and the packed house I was at seemed to eat up every moment. Yet from a production point of view, it’s pretty much a mixed bag. The producers of Swindlers want to be able to take this show to New York for a run in the near future. It’s about halfway ready. Like many a world premiere, it could use more fine tuning first.