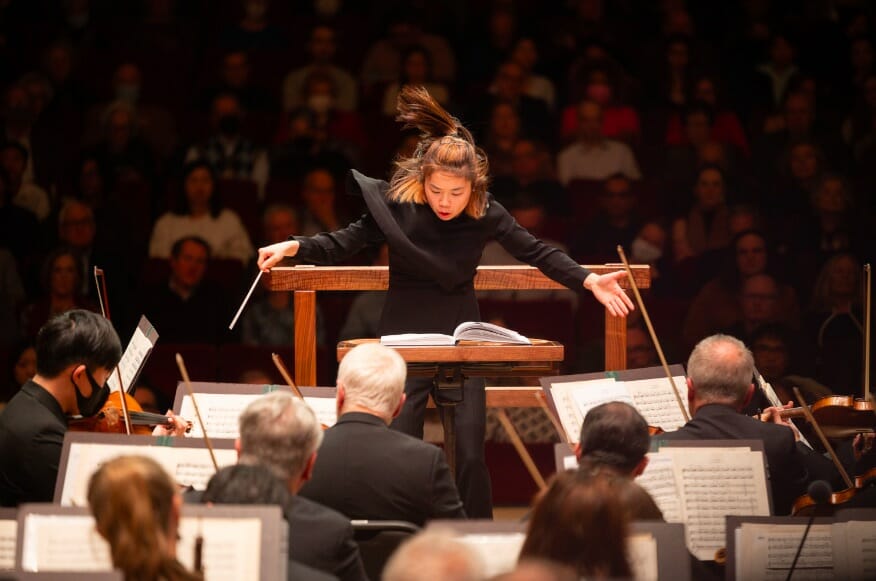 Soon after the Atlanta Symphony Orchestra announced its current season, many months ago, the concert listed for this week received a red circle on the calendar, not to be missed. There were just two pieces on what looked like an exceptional program: a harrowing depiction of an artist’s tormented life in the Soviet Union, led by a talked-about rising conductor; and a brilliant, unbreakable violin concerto with a star fiddler at center stage.

Plenty of other people must have circled it, too, since the show was sold out. And the performance did not disappoint.

In recent weeks, under guest conductors of varying skill and ambition, the ASO has sounded at turns lovely and engaged or, just as often, distracted and a bit ragged. For some of these invitees, the basic functions of a conductor — keeping the orchestra together and the sections balanced — has been a struggle.

But not Thursday, when conductor Elim Chan held everything under tight control for Tchaikovsky’s popular Violin Concerto and Shostakovich’s brooding Symphony No. 10. Born and raised in Hong Kong and now based in Europe, she’s quickly receiving guest invitations from major orchestras. In her mid-30s, still young for a conductor, Chan is already a commanding presence on the podium.

The Shostakovich is one of his best constructed works and, in the strongest performances, also his most emotionally compelling symphony. It’s easy to read (and over-read) autobiography in the tormented Soviet composer’s music, where fear of the gulag was a valid concern, where dictator Stalin and his flunkies could decree abstract symphonic sounds as a threat to the state. But Stalin died in 1953, and soon after Shostakvich started his Tenth Symphony. There are none of the coded, often loopy, double-entendre passages that are a hallmark of many of his previous works. The Tenth feels entirely personal, more somber, and perhaps its unique power is because the mask is finally lowered.

Chan’s gestures were always careful and exact, with a left hand beautifully shaping phases and an electric power emanating from her baton. For much of the hour-long symphony, I couldn’t take my eyes off the tip of that baton, where the tiniest flick would unleash a huge and focused sound from the players.

She judged the moody, melancholy, elusive first movement with an ear for drama. It was restrained at first, almost fearful, reluctant to offer unearned emotions. Ted Gurch’s initial clarinet solos were properly hollowed out — the tragedy of life in an oppressive regime — one of several deeply expressive contributions from the woodwinds.

There were moments I wished Chan’s control had eased up. There’s a section of growing intensity, of howling brass and crazy-nervous strings, that all at once releases into a lucid stampede, hurling the listener forward. You’re helpless to resist it. Here the conductor kept the reins tight, stifling a momentary sense of sweeping motion and freedom.

For understandable reasons, the composer was always coy about specifying a narrative in his music. But it’s said that the savage second movement, brutal and militaristic, was intended as a portrait of evil, of Stalin himself. (You can imagine that Stalin fanboy Vladimir Putin hates Shostakovich 10.) The ASO played it with slashing ferocity and total conviction.

Indeed, across the symphony, Chen had the ASO playing their collective best, on board with her reading — compelling through and through, often riveting.

The concert opened with the Tchaikovsky Concerto, which might be the most-often performed piece of music in the entire ASO repertoire, given almost annual appearances. (They last played it in 2021.) With Hilary Hahn as soloist, it sounded fresh and perhaps deeper, more introspective, than we’re used to hearing. The violinist received a huge ovation when she walked out on stage. She’s clearly a beloved musician.

From the pregnant orchestral opening — you sense something big is about to emerge — Chan had the orchestra play quietly, with a methodical attention to detail. Hahn is a radiant star and comes off as an emotionally mature person. Although the music sometimes seems to beg for a razzle-dazzle treatment, she seems incapable of playing anything for glitz’s sake. Her tone is focused and gleaming, yet there’s nothing athletic or showy in her super-virtuosity. She keeps a cool head.

In the detailed, theme-laden opening movement, there’s an impressive section where the violinist takes one of the main tunes, tosses it around a bit and then embroiders it at top speed, with bare support from the orchestra. Hahn somehow made it sound heftier and even a bit profound — one of several goosebump moments. In the Canzonetta middle movement, Hahn offered it as an opera aria, where our heroine sings of lost love.

The dazzling finale is often played as fast as humanly possible, as a thrilling joy ride. I loved how Hahn and Chan instead held back a tiny bit, firing their weapons in a hail of notes but with a controlled intensity. This was a seriously sophisticated performance of Tchaikovsky.

Hahn returned for an encore — a somber movement of solo Bach — which she dedicated to the much-missed Christopher Rex, the ASO’s former principal cellist and a driving force of so many local chamber music and festival performances.

The program repeats Saturday at 8 p.m., although tickets may be limited or impossible to get. Still, it’s worth a try.

Fighting pregnancy misinformation, and the ethics of organ donations