RESPONDING TO THE DIVORCE WHERE ONE SPOUSE IS READY TO “BURN DOWN THE (FINANCIAL) HOUSE.” 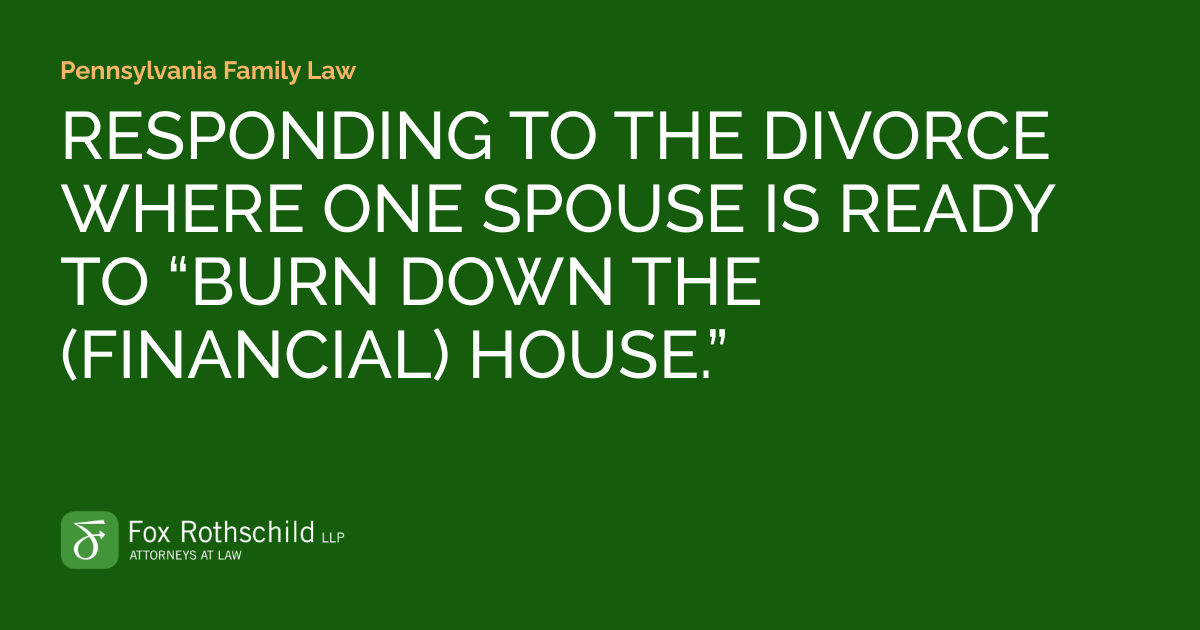 Extreme times produce irrational responses. A day ago, an unhappy orthopedic patient in Oklahoma decided it was time to kill his surgeon. He took three other lives as well as these people got “in his way.”

We are seeing this kind of irrational and largely self destructive conduct in the domestic world was well. A few weeks ago, the Superior Court decided a case where the books and records of the business were so bizarre that no sense could be made of them. In an odd twist the Superior Court remanded the case out of concern that the party who kept the books may have been treated unfairly. Snyder v. Snyder (April 20, 2022)

The non-precedential Crimi case, decided on May 25 follows a similar theme. The Crimis married in 1992 and separated 21 years later in 2013. Husband filed for divorce in 2017 according to the court’s opinion although the docket number still carries a 2009 number when there had been an earlier filing.

The parties had an antique business called Best of France, Inc. Husband owned 90%; wife 10%. Curiously, while the matter was pending Husband closed Best of France and then re-opened as Edmondo Crimi, LLC. He did that in April 2019.

We mentioned that the case had a 2009 filing number. While informing us that the 2009 case was withdrawn in August 2010 (fn. 1) the trial court opinion described a 2014 order by which the parties agreed that inventories of the then existing Best of France assets would be performed and photos of the antiques taken, quaintly, to preserve the facts “in amber.” This apparently did occur as wife introduced her inventory and the photos during the trial in 2021.

Five months after the divorce was filed (or perhaps better put “resumed”) the parties were back in court in June 2017 where the court ordered husband to provide wife with a revised/current inventory and wife was to account for what she had “taken” from the business. The order was ignored so the parties returned for another hearing where the judge re-ordered them to do what she said and to update the business inventory monthly. We don’t know whether either order was complied with; only that the matter meandered on to a non-record master’s hearing in late Summer 2020. Note well, that somehow, someway, the business called Best of France was closed by husband in April 2019 and re-constituted in his name as an LLC. As one might expect the master’s recommendation was appealed and a trial de novo was scheduled.

After several days of trial over several months in earl 2021 the trial court directed husband to $836,394 as “equitable reimbursement alimony” in 6 annual installments of $139,399. Husband appealed.

The core of the appeal is husband’s contention that the trial court divided the business assets while ignoring $3,329,000 in business debt, almost half of which was due to one individual. As one might expect that individual professed to have a secured interest in the inventory of antiques. At trial husband argued the business (Best of France or Crimi LLC?) was worth negative ($1,000,000). Wife said the business was worth $2,100,000. Thus, a $3 million delta in values.

While telling us that there was no separation until 2013, the trial court concludes that husband began in 2012 to gut the value of the business by taking loans from someone named Chance Worthington. Wife professed to have no knowledge of these loans. The trial court opines that as a shareholder wife had to be informed of the debt and consent to it. It also notes that in 2017 while the parties were fussing over inventories husband settled a lawsuit brought by another antique dealer by borrowing money from Chance Worthington and granting him a secured in all of the Best of France “machinery, equipment, inventory and accounts” This was said to secure an obligation due to Worthington since 2014. How the 2014 debt relates to the 2012 debt due Worthington is unexplained. But, the trial court notes that husband never made any payments to the two creditors (Worthington and another named Shapiro) and that there was no loan documentation submitted to the court at trial nor were these debts carried by the accountant on the business balance sheet.  At the risk of tedium, I note that husband professed that Worthington had a secured interest in the assets as a matter of New York law.  One has to ask when and how New York adopted “paperless” secured interests. Moreover, how did the assets of Best of France get into the hands of Crimi, LLC in 2019 without addressing the secured interests said to be outstanding.

The opinion informs us that there was also a parcel of real estate. Husband stopped paying the mortgage and taxes on that property after “separation.” The property was sold by the sheriff and the mortgagee took title. The resourceful Chance Worthington popped up and made a deal to buy the property from the bank for $700,000. Chance was fortunate to find a party to lease his newly acquired property. Husband agreed to pay Worthington $6,000 a month as rent. That’s almost twice what it would have cost husband to borrow $700,000 when the foreclosure/rental deal was made. The trial court found that husband paid the rent promptly and that at the time the foreclosure took place, his bank statement demonstrated the ability to pay Wells Fargo its monthly mortgage. This foreclosure and lease was expressly found to be a dissipation intended deliberately to deprive wife of an equitable distribution.

The appellate opinion ends blandly. The trial court made credibility determinations and those are entitled to the “fullest consideration.” The appellate court find that it saw no records dispositively showing that the debts to either Worthington or Shapiro were actually made before separation. It also enforces an agreement wife alleged that she made with husband as a condition of their reconciliation. “We agreed that he would not do anything with the business without my knowledge and primarily had to do with taking out loans, whether they were business or personal private loans or business loans. No loans period without a discussion and he agreed to that.”

The case also presents a curious analysis on the valuation of “inventory.”  While there were two court orders in 2017 related to creating an inventory of assets, neither party produced an expert opinion related to the value of that property. In fact, husband did not produce an inventory at all but professed that he relied upon his records of his acquisition costs. Meanwhile he also told the court that there was “no way” to track what was in the business inventory at the date of separation. Wife offered the court photos of the property she professed to be inventory and provided 2014 values for each object based upon her “professional opinion.” Her opinion was that the inventory had a wholesale value of $1,595,753. The trial court adopted those values and discarded husband’s argument that his reported acquisition costs should have been employed instead noting that he didn’t provide that information. The Court does reference the Forms 1125-A filed with the business returns and concludes that they reconcile with Wife’s valuation. (Opinion p. 20). The problem this writer sees with that reconciliation is that the year end inventories for tax years 2013 and 2014 never exceeded $457,000.

In the end, the case is remanded and for that the trial court must be granted sympathy. It seems the equitable reimbursement alimony included what amounted to arrears from a spousal support/apl action. The Superior Court properly notes that support/apl arrearages are one kind of award. Equitable reimbursement alimony is confined to settings where distribution of the “existing marital assets…would be insufficient to compensate the payee spouse for his or her contributions to the marriage.” Johnson v. Johnson, 864 A.2d 1224, 1230 (Pa.Super, 2004). The appellate panel notes that the court identified and valued marital assets based on wife’s inventory. Husband argued that these assets were subject to a security interest but he provided no documentation to show the loans or the perfection of the secured interest. Meanwhile the court offers that if wife should co-habit, the alimony might be lost. (Opinion p. 32)  But, isn’t the entire point of this “reimbursement alimony” to eliminate that risk? Section 3701 of the Divorce Code indicates that alimony is needs based and the need is deemed forfeited by cohabitation. 23 Pa.C.S. 3706. Equitable reimbursement really isn’t alimony because it is equity based and not needs based. This is a topic where there needs to be judicial clarity. Suppose a New York court finds that the inventory is physically located in that state’s jurisdiction and that there is somehow a valid lien due to Worthington or Shapiro? Isn’t wife still entitled to her share of what the Pennsylvania court found to be unencumbered marital assets? Equitable reimbursement may be her only remedy and cohabitation should not allow those rights to be lost.  The Superior Court was correct to sever the support arrears from equitable reimbursement. But the court could and should have simply clarified through a modified order that $836,394 was indefeasible equitable reimbursement and that the balance of alimony pendente lite due under the December 2019 order ($21,780 per page 3 of the opinion) was not modified by the final divorce decree and order.

This is a troubling case. It is chock-filled with important legal issues, none of which was really decided. Like the recent Snyder case, it is also a case where one party effectively led the court and a spouse on a wild goose chase to find the assets. At 1,600 words, the reader has endured enough of this post. But, the takeaway is that courts need to get a leash on cases such as this one. In a future blog, we’ll explore remedies to accomplish that.

The Best Hoagies in Philly

‘It’s just been so much fun’ – The Denver Post