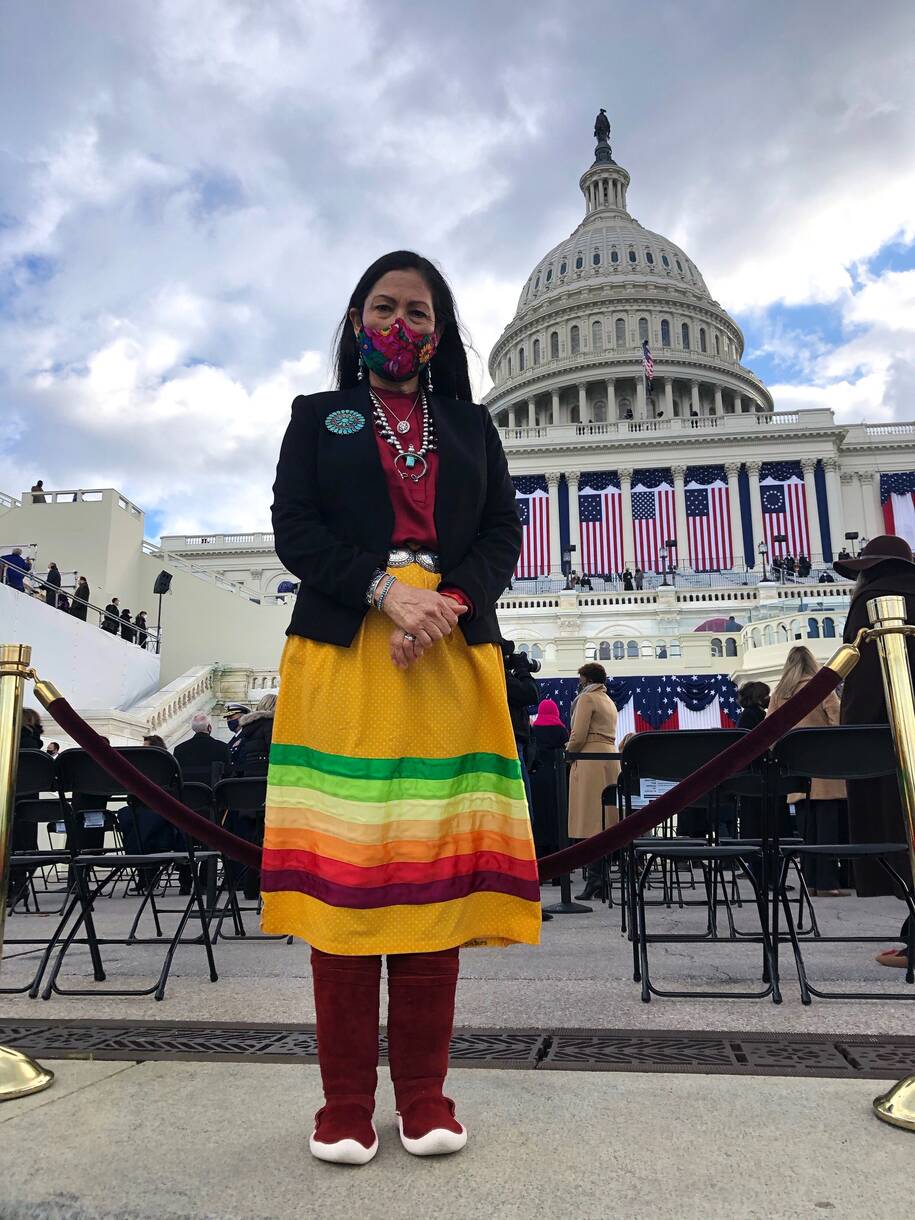 Nominating Representative Haaland is a direct threat to working men and women and a rejection of responsible development of America’s natural resources.

As a member of the Congressional Progressive Caucus, Representative Haaland jumped at the opportunity to introduce the Green New Deal in the House, a so-called plan to “completely transform” our economy and that “goes farther than just calling for a ban on hydraulic fracturing.” The harmful effects of the Green New Deal are well-documented, but it includes eliminating air travel, responsible petroleum development, and the use of non-electric vehicles, costing each American family $65,000 and the United States $93 trillion annually. […]

Therefore, we implore in the strongest terms to withdraw the nomination of Representative Haaland and instead nominate a consensus-driven individual who will not implement policies that will kill jobs and increase the country’s reliance on foreign adversaries.

Not even the right-wing think tank—American Action Reform—that came up with that bogus $93 trillion figure said it was an annual cost. And it’s a flat-out lie that the Green New Deal (GND) would eliminate air travel. The only surprising thing in the letter is that it doesn’t say the GND would eliminate cows, something else nowhere to be found in the proposal’s resolution presented by Democratic Sen. Ed Markey and Rep. Alexandra Ocasio-Cortez two years ago.

The letter also challenges Haaland over her support for eliminating new leases for fossil fuels on federal lands. President Biden issued an executive order Wednesday calling for a one-year moratorium on such leasing.

Stauber has a personal gripe. His “Saving America’s Mines Act,” H.R. 488, would require Congress to approve all mineral withdrawals on federal land. This, reports Emma Dumain at E&E Daily, would mean a go-ahead for the Twin Metals copper-nickel project near the Boundary Waters Canoe Area Wilderness in the Superior National Forest in Stauber’s district. The Obama administration proposed a ban on mining in the area, but Donald Trump ended it. Last year, Haaland co-sponsored H.R. 5598, which would have reinstated the ban, something Stauber claims is one of her “attacks on responsible development.”

The federal leasing moratorium sparked another letter of objection this week, this one signed by 20 Republicans, including heavies in the party leadership like Kevin McCarthy, Liz Cheney, and Steve Scalise. They expressed opposition to the 60-day moratorium on federal leasing of mining and drilling signed Jan. 20, noting: “This decision seems to be a first step toward a policy banning mining and oil and gas development on federal lands and waters.” The letter doesn’t mention Haaland.

Several tribes have objected to Stauber’s letter to the president with a letter to him:

Now all five tribes in Stauber’s congressional district are accusing him of blindsiding them and appeasing big industrial interests at their expense.

“This historic nomination is more important to us and all of Indian country than any other Cabinet nomination in recent history,” leaders of the five tribes wrote in a letter dated Jan. 14 and reviewed by NBC News. “Your opposition to the first and only American Indian ever nominated to a Cabinet position is likely to reverberate across Indian country.”

The Midwest Alliance of Sovereign Tribes, representing 35 tribal nations in the region, labeled Stauber’s attack on Haaland “offensive,” “hostile,” and “irresponsible.” Aaron Payment, the organization’s chairman, said Stauber had “subordinated the interests of Indian tribes to the interests of those you represent in your letter without any consultation with the tribes. We are unaccustomed to any member of Congress serving in such a public role in leading an attack that diametrically opposes the wishes of nearly all of Indian country,” Payment wrote. “This is unprecedented.”

Stauber and others in Congress may have a tough time persuading enough senators to shoot down Haaland’s nomination. But there almost certainly will be more of them leaning toward a nay vote against her than there have been for Biden’s other Cabinet choices so far. And that’s before anybody raises the matter of Haaland’s views and possible actions on tribal sovereignty or the possibility she will push to reform the Bureau of Indian Affairs’ handling of trust lands and deal with the failures of the Bureau of Indian Education, both overseen by the Interior Department.