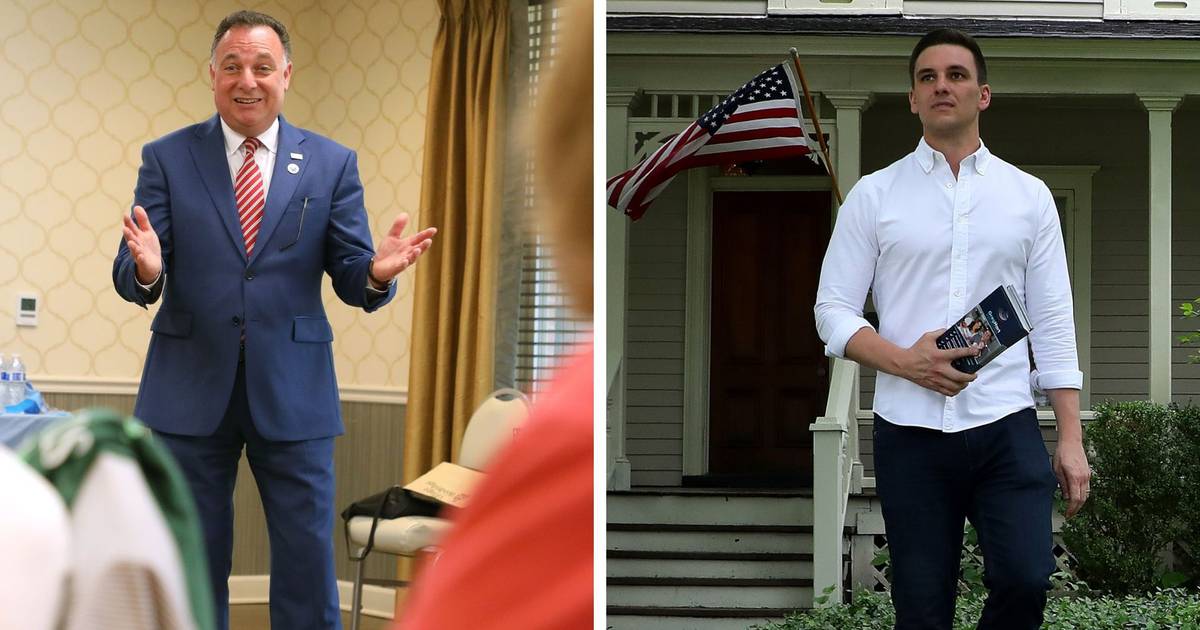 At a glance, the choice between Pete DiCianni and Greg Hart to become the Republican nominee for DuPage County Board chair later this month might seem like a coin flip.

Each is already a member of the County Board. Each says he’s tough on crime, fiscally responsible and compassionate toward people afflicted by drug addiction. Each has racked up dozens of endorsements and hundreds of thousands of dollars in campaign cash while expressing similar goals for the office.

But their seemingly minimal policy differences haven’t blunted the saltiness of the primary race, with each candidate questioning his opponent’s Republican bona fides.

Hart, meanwhile, highlights work that a printing company and campaign marketing firm owned by DiCianni have done for Democratic candidates and political groups. They include the Coalition for Better Government, a group associated with the Daley machine whose treasurer, Dominic Longo, was once convicted of vote fraud, and state Rep. Deb Conroy, the Democratic candidate for board chair (DiCianni printed $822 worth of T-shirts in 2018 for Conroy, whom he calls a friend).

DiCianni said while his work for Democrats is just business, it shows he can reach across party lines. Hart gave a similar answer about his campaign contributions, though he said there’s a difference between accepting a donation and working for a candidate.

“Pete DiCianni’s business choices show the direction he would lead our community,” he said.

Whoever wins on June 28 will likely face a stiff challenge from Conroy in the general election, which could prove to be a signal about the county’s political future.

That’s because DuPage County, long known as one of the most Republican jurisdictions in the nation, has in recent years seen Democrats take control. They now hold all of the county’s congressional seats, most of the state legislative offices and a majority of the 18 County Board seats.

But College of DuPage political science professor Melissa Mouritsen thinks the board might again be up for grabs.

“Governing is different than simply winning,” she said. “Now that (Democrats) are governing, they don’t seem to be able to make the policies the same way they promised they would. There’s been a lot of fighting, a lot of disagreement, a lot of rookie mistakes. … They’re going to have to answer for that, and I think it’s going to be a close race.”

Hart, 34, is a management consultant from Hinsdale. With less than five years in elective office, he has a shorter political résumé than DiCianni, but he’s still the choice of the county’s Republican establishment: The sheriff, coroner and current board chairman have all endorsed him.

“He’s got great people skills and works hard,” said Dan Cronin, who is stepping down as chairman after 12 years in the post. “I feel really good about him. He’s the future of DuPage County.”

Hart was appointed to the board in 2017 and won his first election in 2018. He said his signature accomplishments have been consolidating the county’s psychiatric services, helping to create a small business loan program and leading the HOPE Task Force, formed to combat the county’s opioid crisis.

“We’ve managed to create programs that have connected people to expanded treatment, expanded Narcan availability to save lives and reverse overdoses and connected people with employment opportunities who are showing success in drug treatment,” he said.

If elected to the top job, he said, he wants to keep taxes flat, make it easier for companies owned by women, minorities and veterans to do business with the county and ensure the sheriff and state’s attorney get what they need to combat rising crime.

DiCianni, 55, is a former mayor of Elmhurst who has helped to get several state laws passed, including a measure that requires insurers to cover autism treatment and one that allows police to track cognitively impaired people through GPS wristbands if they go missing.

He said he was moved to run for the County Board in 2012 after flooding problems in Elmhurst convinced him a higher office could more effectively address the problem. He originally intended to keep his mayoral job while on the board, but relinquished the post after a fusillade of criticism.

He said he’s proud of getting federal money for stormwater relief and of pushing for a state law, prompted by the death of an Elmhurst teen, that allows first responders to carry epinephrine auto-injectors to treat anaphylactic shock.

He wants to continue such altruistic works as county chairman — “Unlike a lot of Republicans, I have a huge heart,” he said — while keeping taxes in check, spurring economic development and making sure the sheriff’s office has an ample budget.

Public safety is a central issue in the campaign, with both candidates pointing to the Dec. 23, 2021, shootout at the Oakbrook Center mall, for which two Chicago men have been charged, as a warning that big city crime is encroaching into the county.

DiCianni cites his 2017 vote against cutting positions in the sheriff’s office as proof of his dedication. Hart, along with a majority of his colleagues, voted for the measure.

“If I’m chairman, I will fully fund the budget, get the head count back where it should be and make sure that we keep our county safe,” DiCianni said.

Hart responded that the vote was about fiscal responsibility after former Sheriff John Zaruba chose not to fill some budgeted positions. Current Sheriff James Mendrick is endorsing Hart, calling him an ardent and effective advocate for law enforcement.

Mendrick added that DeCianni “has a harder ability to get along with people. He’s definitely more aggressive and I don’t necessarily think that’s always a good thing.”

That sharp edge was evident two years ago when DiCianni confronted people demonstrating against a pro-police rally in Elmhurst, then sent a crude email to a resident who criticized him. He apologized and resigned under pressure as chair of the board’s Health and Human Services Committee.

DiCianni told the Tribune he wasn’t “perfect in my response” but was unapologetic about supporting his hometown police force.

“We need to move on and I would hope that one slight indiscretion does not affect all the good that Pete DiCianni has done,” he said.

One of his backers, Woodridge Mayor Gina Cunningham, put a positive spin on his temperament.

“I really think I’ve found in Pete someone who is passionate, and I can’t question someone’s passion,” she said. ” … I just know the great works Pete has done and continues to do.”

Chicago’s ‘Walking Man’ improves after being set on fire

What to know about Soldier Field, Arlington Heights move