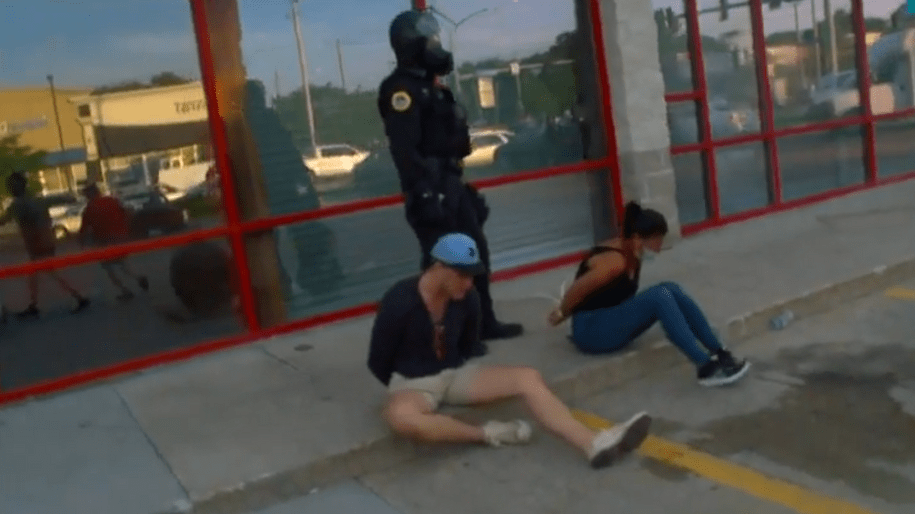 A reporter in Iowa who was pepper-sprayed then arrested at a Black Lives Matter protest on May 31, 2020, was acquitted Wednesday. The Des Moines Register reporter Andrea Sahouri was charged with failure to disperse and interference with official acts by prosecutors despite being at the scene for reporting purposes. According to Iowa law, both misdemeanors carried fines of $65 to $625, as well as up to 30 days in jail.

The decision to acquit Shaouri follows three days of a jury trial in Polk County Iowa. Police had claimed she remained in the area of a protest despite orders to leave and tried to pull away when officers pepper-sprayed and attempted to arrest her.

During her testimony Tuesday, Sahouri explained that she was a journalist on an assignment during the incident and even identified herself as such when an officer first approached her. But instead of understanding her role in documenting the historic protests the officer pepper-sprayed her and zip-tied her wrists. “This is my job. This is my job,” Sahouri could be heard saying in video footage. “I’m just doing my job. … I was sent here. … I’m a journalist.”  The officer who arrested her did not activate his body camera, so video footage seen during the trial came from another officer who arrived moments after her arrest.

Register reporter Andrea Sahouri describes the moment she was arrested covering a racial justice protest this summer. See more from her trial at https://t.co/fgn8vFmfw9 pic.twitter.com/O1FrwvHnxj

Despite video evidence that she was covering the protest for the Des Moines Register and did identify herself, prosecutors with the Polk County Attorney’s Office argued that Sahouri’s status as a journalist was irrelevant to her charges. To that, the defense argued that orders before the arrest were conflicting.

According to the Des Moines Register, the defense argued that Sahouri, her then-boyfriend Spenser Robnett, and another then-Des Moines Register reporter, were moving away from a crowd when police deployed tear gas and that claims Sahouri and Robnett interfered with her arrest were thus not consistent with testimonies, photo, and video from the scene. Both Sahouri and Robnett testified that and denied that they tried to pull away from the arresting officer, identified as Luke Wilson. The jury found both Sahouri and Robnett, who was also arrested and charged, not guilty. The other reporter was not arrested or charged.

“I’d like to thank my family and friends, my Des Moines Register and Gannett colleagues and people around Des Moines, nationally and globally who have supported me for nearly a year after I was unjustly assaulted and arrested. I’m thankful to the jury for doing the right thing. Their decision upholds freedom of the press and justice in our democracy,” Sahouri said in a statement after the verdict.

Her arrest and the fact it even went to trial garnered national attention. Human rights activists and press advocates closely followed the trial and criticized prosecutors for wasting time and resources on a case that violated an American’s press freedom rights.

“Freedom of the Press Foundation is heartened that the jury apparently saw this case for what it is: a disgraceful use of prosecutorial resources and an assault on fundamental principles of press freedom. The jury verdict is welcome, but doesn’t fully lift the shadow this prosecution has cast over one of our country’s most core values,” Trevor Timm, executive director of Freedom of the Press Foundation, said in a statement. “Andrea Sahouri should never have been arrested while reporting at that protest in May. Once that egregious mistake was made clear, the charges should never have been filed, or immediately dropped. That these charges were pursued all the way to trial is a shame and an embarrassment for press freedom in the United States. We hope police and prosecutors around the country will learn from this case.”

Sahouri was one of more than 125 journalists arrested or detained last year in the U.S. according to the U.S. Press Freedom Tracker, a joint project by Freedom of the Press Foundation and Committee to Protect Journalists. While in most cases, police departments and prosecutors’ offices did not fully pursue charges against journalists covering protests, Sahouri was one of at least 13 other journalists still facing charges for their arrests during the George Floyd summer protests.

According to the Des Moines Register, at least 79 people were arrested over a three-day period of protests in May 2020. Court records indicate most of those cases were dismissed because of insufficient evidence of arrest documentation.

“We thank the jury for its time and thoughtful consideration of Andrea’s case. We are grateful that the jury saw this case as the unjust prosecution of a reporter who was doing her job. Newsgathering is a fundamental part of press freedom. Reporters need to be at protests as the public’s eyes and ears, to conduct interviews, take photos and witness for themselves the actions of protesters and law enforcement. If reporters are arrested and hauled away from protests, that denies people the right to know what’s going on in their community,” Des Moines Register Executive Editor Carol Hunter said.