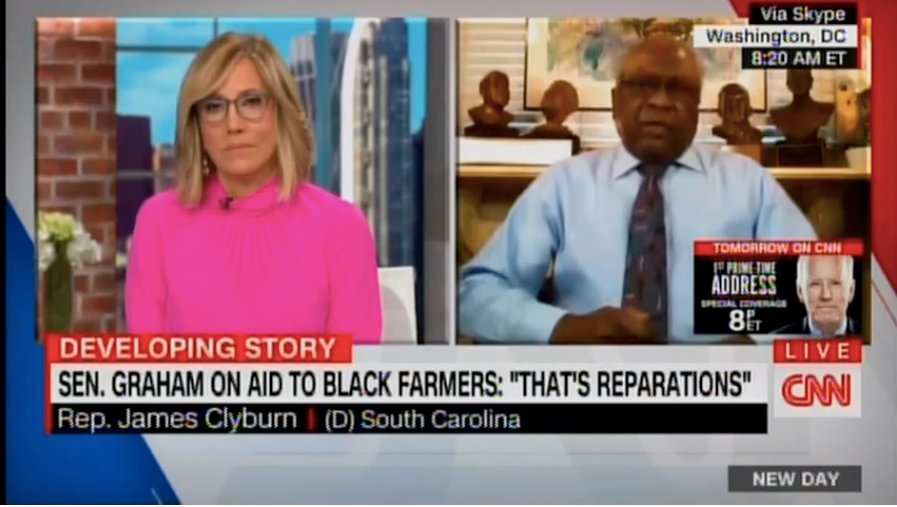 “Let me give you an example of something that really bothers me,” he began. “In this bill, if you’re a farmer, your loan will be forgiven up to 120 percent of your loan if you’re socially disadvantaged if you’re African American… some other minority. But if you’re [a] white person, if you’re a white woman, no forgiveness! That’s reparations! What does that have to do with COVID?”

Note, among other things, his emphasis on “white woman.” We’ve known for a long time that the Republican Party likes to reach out to its contingency of white women when convenient while all the while fighting against reproductive justice and autonomy, but it feels especially obvious in recent days as so many in the GOP use the idea of protecting cisgender girls and women in sports as an excuse for exclusionary transphobia.

And, of course, providing aid to Black farmers is not actually reparations.

CNN’s Don Lemon gave a fantastic reply to Graham, as you can check out in the video below. Among other points, he advises Graham to pick up a “history book.” He said, as many would likely agree, that if Graham wants to talk about reparations, that’s great—but, as Lemon put it, “that ain’t it.”

Clyburn also responded to Graham’s assertion, bringing up both history and religion. When asked what Clyburn would say to Graham (and those who agree with him) that funds in this relief bill are reparations, Clyburn said of Graham: “Well, I think you ought to go back and maybe, go to church … Get in touch with his Christianity.”

“Lindsey Graham is from South Carolina,” Clyburn stated. “He knows South Carolina’s history. He knows what the state of South Carolina in this country has done to Black farmers,” stressing that, “They didn’t do it to white farmers.”

In terms of COVID-19 relief, Clyburn emphasized: “We’re trying to rescue the lives and livelihoods of people.” In reference to Graham, Clyburn said, “He ought to be ashamed of himself. He knows the history of this country and he knows what has happened to Black farmers.”

“Lindsey Graham ought to be ashamed,” he stated. That’s something we can all agree on.