Remote workers tap scheme to see out pandemic in Caribbean 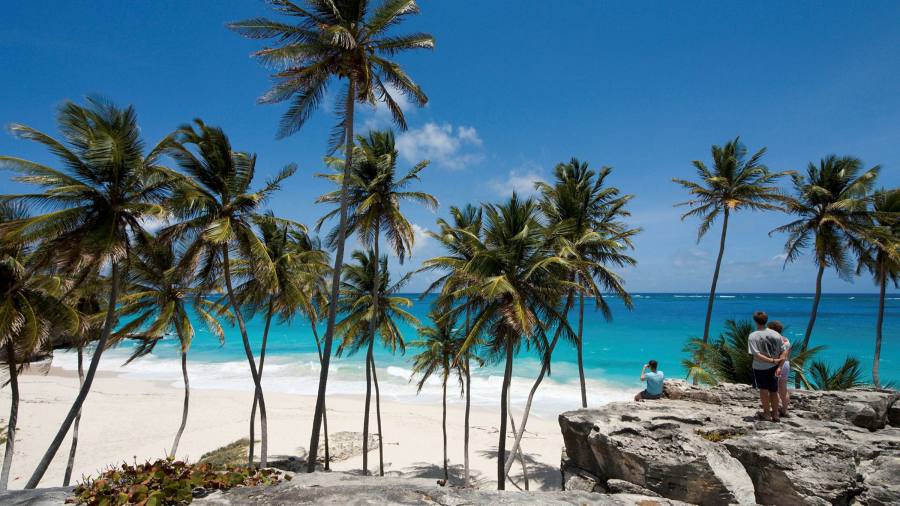 Working from home during a pandemic can be tedious. Businessman Chris Docherty has no such complaints after he swapped rainy south-west England for the sun-kissed Caribbean island of Barbados and a new office next to a polo field.

“The quality of life in Barbados is great,” said Docherty, managing director of Windward Commodities, which connects commodity producers with consumer markets. “We literally packed up our house in a week and moved. My wife was working in the UK at the time and transferred over here. Her employer was completely understanding.”

They are among the thousands of remote-working “digital nomads” who since last summer have been encouraged to relocate to the Caribbean via special “work-from-home” visas.

Barbados kicked off the trend in July when it began offering a one-year remote-working visa to applicants earning $50,000 or more a year from an employer based outside the country. The Bahamas, St Lucia, Bermuda and Antigua have since launched schemes of their own.

They are just one of the ways that governments in the Caribbean, among the world’s most tourism-dependent regions, are seeking to manage the coronavirus-linked collapse in the number of visiting holidaymakers.

“The impact of this pandemic on the Caribbean economies is [such that] if there were a scale beyond a category five hurricane — which is the maximum — it would be this pandemic,” said Tahseen Sayed, World Bank country director for the Caribbean.

Interest in the programme was much higher than anyone expected. I don’t see any reason for [it] ever to be stopped

“Especially the small island states in the Caribbean have been dramatically and disproportionately [hit by] the pandemic, with an average of about 40 per cent of GDP connected to tourism,” she said.

The region’s leaders have been generally praised for managing the health side of the pandemic. Quick action to restrict entries and introduce testing kept infections and death rates well below those in nearby Latin America. But this did not prevent economic devastation.

The Caribbean economy contracted 12.2 per cent in 2020, according to the World Bank, and is expected to recover by only 3.7 per cent this year. It will take until 2024 before the region’s economy returns to its pre-pandemic size.

The Barbados Welcome Stamp visa, which costs $2,000, can be obtained by filling in a simple online form. Barbados Tourism Marketing said 3,678 people had been accepted for the programme since it began, of which 1,456 were dependants. More than two-thirds of applicants to the scheme, which is free of local income tax, were from the US, UK and Canada.

Coronavirus restrictions on Barbados have generally been less onerous than in Europe, although a two-week lockdown and curfew was imposed on February 3 to contain a rise in cases.

“The education here is excellent and we have a very wide array of friends,” said Docherty of his new home. “You have everyone from billionaires and CEOs of global companies to local people you meet in the rum shops.”

Vincent Vanderpool-Wallace, a former Bahamian tourism minister, said his country’s Beats visa scheme had even attracted wealthy students studying remotely at US universities. “Interest in the programme was much higher than anyone expected,” he said. “I don’t see any reason for [it] ever to be stopped. It’s one of the benefits that derives from the pandemic.”

Rogerio Basso, head of tourism at IDB Invest, the Inter-American Development Bank’s private sector arm, agreed that the digital nomad trend in the Caribbean was here to stay.

“The pandemic allowed us to dial down a bit,” he said of how working life had changed. “A lot of folk were looking for a transformative experience and the Caribbean has an element of authenticity which is highly sought after.”

The small size of Caribbean nations means that businesses operating there can move faster to introduce measures to keep the virus under control.

St Lucia, for instance, has mandated the use of wearable medical devices for returning residents and citizens quarantining at home. The coin-size Biobutton sensor monitors a range of body data such as temperature, respiration and heart rate in order to detect coronavirus.

Even with such technology, it will take years for mass tourism to return to the islands. Airline schedules in the region have been shredded by the pandemic and the main carrier serving east Caribbean, LIAT, collapsed last year.

Suárez estimated that hotels were operating at 30 per cent capacity after being hit by fresh European and US travel restrictions. “So far, we’ve survived,” he said. “But all the fundamentals keep changing. We’re having to adjust forecasts every month.”

Some luxury hotels on islands such as St Vincent or St Lucia have coped better. “The very high-end traveller can come in on a private yacht or a private jet and has the resources to organise testing,” said Chris Bennett, managing director of The Caribbean Council, a trade and investment consultancy. “All that business has done pretty well.”

Despite these difficulties, there is optimism in the Caribbean, which is used to living under the threat of hurricanes and natural disasters.

“I see a lot of resilience and stoicism,” said Sayed at the World Bank. “And a remarkable faith, which is that this too shall pass and we can build back better.”

The Best Lipsticks to Try on National Lipstick Day 2021