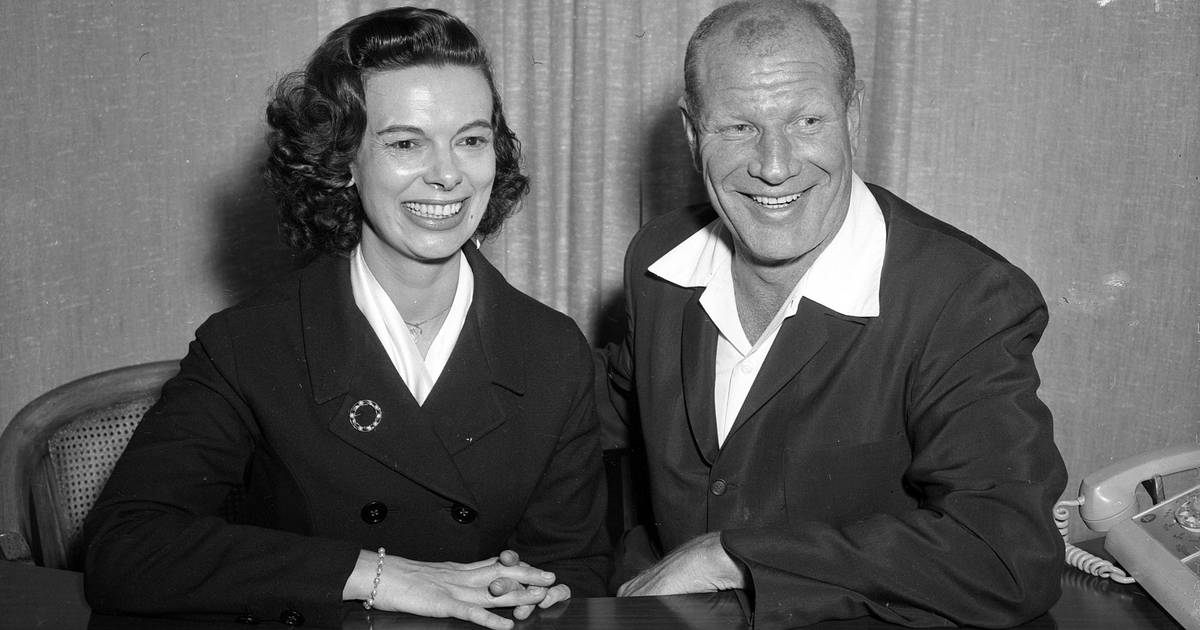 An anti-disco promotion with a local rock station and radio personality Steve Dahl had gone awry, with thousands of fans invading the field and forcing the forfeiture of the second game of a scheduled doubleheader with the Detroit Tigers.

Bill returned to their South Side home in a foul mood.

“Bill was upset at having to forfeit the game,” Mary Frances told the Tribune in a 1989 interview. “He had never had anything that had ever interfered with the playing of a game, including the midget.”

She was referring, of course, to the famous 1951 stunt in which Veeck signed 3-foot-7 Eddie Gaedel for the St. Louis Browns and sent him to the plate in a game. It was a strange moment that forever would be linked to the baseball maverick, just as Disco Demolition Night would.

“I always had kidded Bill that his epitaph would be about the midget,” Mary Frances said. “That night, before we were going to sleep, I said, ‘Bill, you finally got the midget off your back.’”

Bill and Mary Frances Veeck were one of baseball’s most famous couples from their marriage in 1950 to his death at age 71 in 1986. She continued to live in Chicago after Bill’s death, and I interviewed her on occasion for the Tribune on a number of baseball-related topics.

So it was sad to read last week in freelance writer Dave Hoekstra’s blog that Mary Frances died on Sept. 10 at 102.

“Maryfrances’ life has been full,” the Veeck family wrote in a death notice, using the given spelling of her name.

In addition to raising six children, she hosted a radio show with Bill called “Mary Frances and Friend,” wrote a monthly column for four years for Northshore Magazine, served as a Chicago election judge for two-plus decades, taught adults how to read through a program by St. Thomas the Apostle Parish in Hyde Park and helped raise money for the Chicago Theological Union.

“Throughout her incredible journey through life, she championed equity, empathy and kindness,” the family’s statement said. “She influenced many people of all ages with her positive approach to life, enthusiasm for social change and hope for our future. She was a magical person who will be missed by many, far beyond her large, loving family.”

Born Mary Frances Ackerman on Sept. 1, 1920, near Pittsburgh, she met Bill while working as a publicist for the Ice Capades. He proposed one week after they met, and they were married in 1950. She was more than just a sounding board for her famous husband, who was renowned for his off-the-wall ideas and an approach to marketing baseball that was years ahead of his time, such as putting names on the back of the Sox uniforms in 1960.

In his book “Veeck As In Wreck,” Bill called her a “skilled publicity and idea” woman who co-hosted TV and radio shows with him and came up with an idea to send a Browns contract to newborns in St. Louis.

Mary Frances also designed the navy blue shorts the White Sox wore for three games in 1976 in a brief experiment that baseball purists greeted with distaste.

“They are not garish,” Bill told reporters at a fashion show where the uniforms were modeled before the 1976 season. “Like my wife, Mary Frances, said, they have understated elegance. Basic blue for the road, while at home the traditional Sox colors. What have the White Sox been doing wearing red socks all those years anyway?”

#OTD in ’76: In Game 1 of a doubleheader against the Royals, the White Sox take the field at Comiskey Park wearing shorts, the brainchild of owner Bill Veeck. They win the game 5-2 and will wear shorts for two more games that month before retiring them for good. pic.twitter.com/CAULykKgDl

Mary Frances narrated a documentary on Bill’s life for WTTW-Ch. 11 and sometimes sat with him in the center-field bleachers at Wrigley Field after he sold the Sox in 1981. Bill Veeck, who in 1937 oversaw the construction of Wrigley’s bleachers and manual scoreboard and planted the ivy on the outfield walls, famously began to boycott the Cubs in 1985 soon after the team ended its decades-old policy of not selling bleacher tickets until the day of the game.

“It did bother him,” Mary Frances told me. “But he was definitely a man of integrity and principles. Bill felt the bleachers were the last bastion of the common man and woman. It wasn’t just a matter of picking a quarrel with the Tribune (Co.). I think he looked on (the new bleacher policy) as being a little greedy, and he just didn’t like that.”

Other teams eventually adopted many of Bill’s ideas, and Mary Frances told the Tribune in 2000 it bothered him to see modern scoreboards exhorting fans to cheer on command.

“It used to drive him crazy when he’d hear the contrived cheering and clapping,” she said. “The first time he heard that, he looked at me and said: ‘What? We’ve all become idiots? We don’t know when to clap?’ It’s so false and phony and insulting.”

Comiskey Park, circa 1950’s. Bill Veeck bought the White Sox in 1959 and painted the exterior white. A year later he added the “exploding scoreboard.” pic.twitter.com/NZwfaQoaSR

Bill and Mary Frances were always ambassadors for the game, in spite of its faults. They also believed in developing relationships with the media that covered their team, as evidenced by Bill’s friendship with the late Tribune baseball writer Jerome Holtzman.

“You develop friendships in the game, and I think the thing between Bill and Jerome was they could always count on what the other one was saying,” Mary Frances said after Holtzman’s death in 2008. “There was mutual respect, and when something came up and they wanted answers, they could count on each other being truthful.”

The White Sox paid tribute to Mary Frances during Friday’s game at Guaranteed Rate Field with a moment of silence. According to the family, a celebration of her life will be held at 11 a.m. Nov. 12 at St. Thomas the Apostle Catholic Church, 5472 S. Kimbark Ave., in Hyde Park.