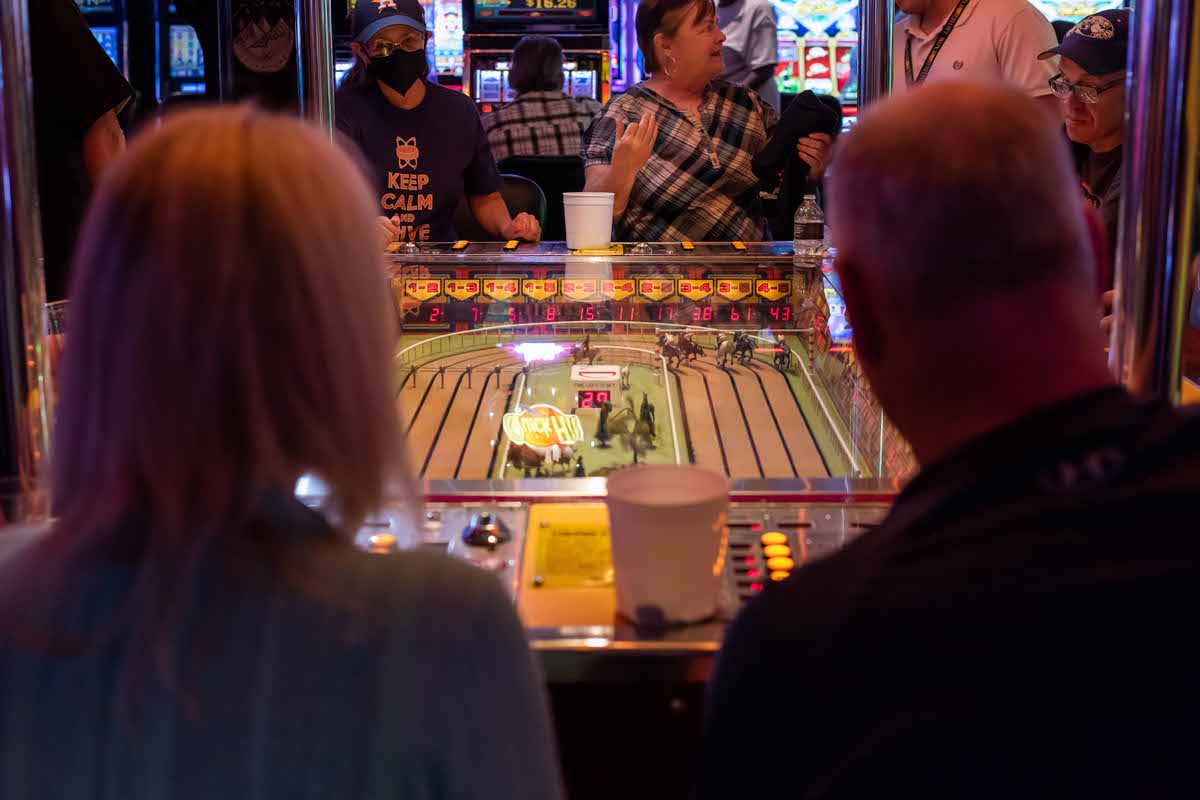 The D has become somewhat of a mecca for gamblers — mostly small-time gamblers — who want to play a vintage coin-operated slot machine that is the only one of its kind in Las Vegas and one of the last in the United States.

On the second floor at the popular downtown gaming hall, up to 10 players at a time can be found playing the Sigma Derby Horse Track — and nearby gawkers can be seen looking at its flashing yellow-and-orange facade while five tiny plastic horses endlessly gallup around a miniature race track with faux dirt.

“This is like the good old days,” said Joyce Camper, who lives in a rural town near Lame Deer, Mont., and is in town for the week. “Everyone sits around and talks. When I’m here, I see a lot of college kids sit around and make side bets, which really makes it a communal game.

“Everyone talks and it’s more fun that way, so it’s a little different than the rest,” she said. I’ve had better luck with this than with real horse racing.”

For Camper and other guests trying their luck Wednesday morning on Sigma Derby, owner Derek Stevens and other casino staffers were on site handing out T-shirts as part of a weekslong campaign to celebrate the slot’s 10-year-anniversary at The D.

Between 11 a.m. and 4 p.m. each Wednesday through Aug. 31, guests seated and wagering at the Sigma Derby machine will have the chance to receive one of 50 limited edition shirts allotted to be given away on that particular day.

For those unfamiliar with the Sigma Derby, the object of the game is simple: Insert at least one quarter into the machine and bet on any combination of horses to finish first and second. Each combination has different odds, which range between 2-to-1 and 200-to-1, and change after each race. The game lasts about a minute, then players have 30 seconds to place their bets ahead of the next race.

“I can’t believe it’s been 10 years,” said Stevens, who in addition to The D is also co-owner of downtown’s Circa and the Golden Gate. “I still remember us trying to acquire this Sigma Derby.”

That quest 10 years ago to get the machine and then get it in working condition, he admitted, was no small feat.

When his crew first bought the machine, it had to be partially refurbished, Stevens said. For one, the colorful flashing canopy that sits atop the slot today was missing. Throughout the years, casino officials were able to find the parts to reconstruct the canopy, making it as close to the original slot that Stevens said was the first machine he ever gambled on way back at the legendary Dunes.

“One of the things that attracted me to this, this was the first slot that I ever played in my life,” Stevens said.

According to The D’s website, the 34-year-old machine is the only one remaining in a Las Vegas casino. It was once a popular choice in Sin City. Mixed reports online say another lives on at the Tropicana Atlantic City. Folks will be hard-pressed to find one in between, Stevens said.

Like Camper, the Montanan playing the machine Wednesday, Stevens said the game’s unique sense of camaraderie was what attracted him to it in the first place and was the reason folks still play it today.

“This is not a slot machine where you spend your time alone,” Stevens said. “This is a machine where you root for the player across the game from you or the person next to you. It’s a great game to have a big win, and to have a lot of fun. It happens quickly, and I think it just has to do with the camaraderie and the fun you can have with a group.”

Other gaming manufacturers have tried to replicate the success of Sigma Derby, but few have lived up to its fanfare. A Fortune Cup Deluxe machine made by Konami sits across from the original Sigma Derby (and is also located in several other Resort Corridor properties) — although it’s undoubtedly a much more modern machine, there’s no replacing a classic.

“It’s totally different than the new one, that’s for sure,” said Steve Buchanan, of Husonville, Mich. “We don’t even play the new one. (For me) it’s all about the flash and the quarters.”

Buchanan and his wife, Cindy Buchanan, were seated side by side Wednesday at the Sigma Derby machine and were part of the first group to receive the promotional T-shirts.

Cindy Buchanan, she said, once hit a 200-to-1 payout — that she admits wasn’t much — but the sound of the quarters dropping through the hopper was one of the sweet feelings of vintage Vegas.

“He (Steve) told me not to play, but I did it anyway,” Cindy said, grinning.

As seemingly priceless as Sigma Derby may be, Stevens admits it’s taken a lot of work to keep it functional this long. He credited The D’s slot maintenance team with keeping it up and running, even though it may not always be that way.

“In this day and age, you can’t really build a casino based on quarter-based games, and even now, the max bet is just a few quarters,” Stevens said. “In a day and age with all the technology and electronics, there’s a certain element of simplicity here that you can understand.”

But in addition to his crafty slot team that tries to keep Sigma Derby in its original glory, he also credits the dedicated cult following it’s garnered through the years.

Between the two, Stevens said, he hopes Sigma Derby can last for several years to come.

“I think there’s a lot of Sigma Derby fans that feel when they come to Vegas, this is going to be the first bet of their weekend,” he said. “It kind of gives them some good karma for the rest of the weekend, and I support that theory.

“We’ve done everything we possibly can to keep this up and running. I love this attraction at The D, and I want to keep it going as long as we can.”