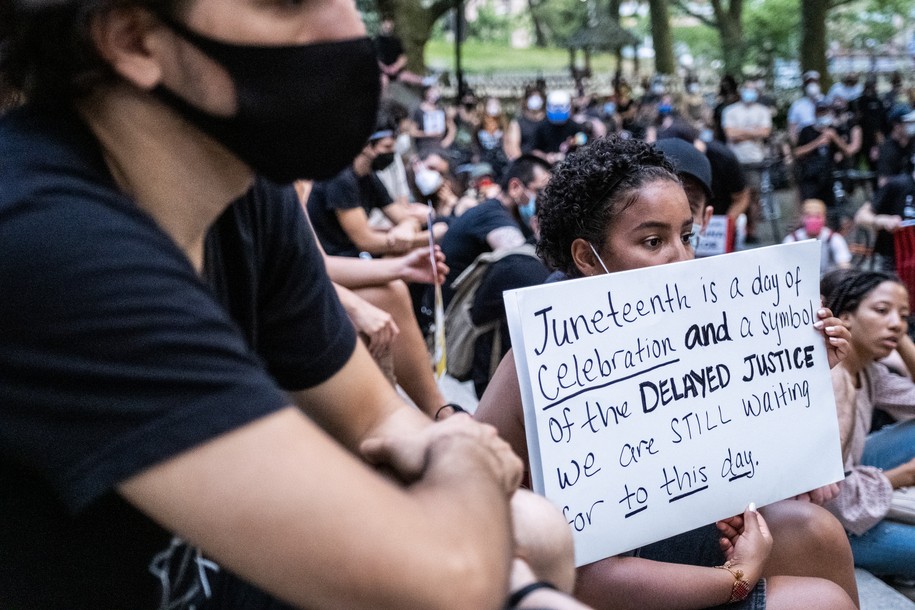 For more than three decades, the Tenement Museum documented the history of the Lower East Side through two historic sites at 97 and 103 Orchard Street and multiple walking tours, providing a glimpse into the lives and stories of European American immigrants, and more recently, Chinese American and Puerto Rican immigrants. But while there had been an early plan to include stories of a Black family living in the tenements at 97 Orchard Street, records of a Black family living in those homes never emerged, and the plan was slowly whittled away. Outside of a theatre play and a self-guided walking tour developed in the 1990s, there hadn’t been any museum programming dedicated to the lives of Black Lower East Side residents.

Visitors to the museum noticed that information gap, often inquiring where Black communities had historically been located and how they fit into the fabric of the neighborhood, Lloyd said. To flesh out answers to those questions, the museum began developing Reclaiming Black Spaces in 2018. Its launch in 2021 has turned out to be particularly timely. Lloyd noted how the tour’s mission to resurface previously erased and ignored how Black history is related to the current conservative backlash to critical race theory and the attempts to control what schools teach as part of our national narrative. At the highest levels, the U.S. still hasn’t fully grappled with the legacy of slavery, and that reluctance continues to shape public perceptions about who “built” the country and who paid the cost.

“People don’t understand that [enslaved] people are the ones who built those first buildings in the city in the colonial period and that New York built its wealth off of the labor of enslaved people, whether in New York or in the South,” Lloyd said.

Black stories in New York stretch back to the earliest days of Dutch settlement in the area. With a wealth of potential history to highlight, it’s been a challenge for museum curators to choose which sites to include in a 40-minute walking tour. The current tour was developed in partnership with the National Parks Service and Lower Manhattan African Burial Ground and touches upon political, cultural, and artistic significance sites spanning from the era of the Land of the Blacks up to the 1960s. Landmarks include Engine 55, the firehouse where Wesley Williams became the first Black FDNY officer promoted to lieutenant; the M’Finda Kalunga Community Garden, a commemorative site for another African Burial Ground located nearby; and the Congress for Racial Equality’s former field office. A longer tour is currently in development and will culminate at the African Burial Ground in Lower Manhattan.

During the tour I joined, many of the attendees—a group of about ten from all over the country, including some New York residents—were learning about these sites and their stories for the first time. Many of us wondered aloud, were any of these locations officially recognized as historical landmarks? Most were not, but in prompting that question, the tour realized one of its goals: spurring attendees to think critically and take action by teaching them more about the presence of these spaces.

In developing the program, Lloyd and her peers learned more about existing efforts to research, document, and preserve the sites featured on the tour, and are now lending their support to those efforts. The museum encourages visitors to submit recommendations to the city for sites that should be considered for historical preservation. Ideally, tours like Reclaiming Black Spaces will help people consider what should be preserved in the physical landscape and feel more empowered to take an active role in influencing what gets designated as a historical landmark, whether in New York or their own communities.

“We all have the power to preserve and document history at the grassroots level, and to figure out what are the sort of official preservation mechanisms within where we live,” Lloyd said.

Last year, Elsa Waithe was scrolling through social media and came across a census record from the antebellum period, revealing that some of Brooklyn’s most well-known and wealthiest families of the time were enslavers. The revelation was particularly jarring as the names of those families were etched on street signs running throughout the entire borough. Waithe and their roommate Ada Reso researched more about the borough’s connections to slavery, spurring them to undertake what they refer to as “guerilla education.” Waithe and Reso teamed up with a Brooklyn-based design company to create stickers resembling street signs featuring a family’s name and the number of people they enslaved over a given time period.

Not long after Waithe and Reso’s project was underway, Maria Robles spotted one of their stickers along Nostrand Avenue and contacted them to share her own research on Brooklyn’s slaveholding families. Together, the three now run Slavers of New York, a stealth informational sticker campaign throughout Brooklyn—and increasingly in the other boroughs. They also share that information through Twitter and Instagram, where they provide even more detail and context about New York’s history with slavery and how the families for whom those streets are named were involved.

Robles, who heads the research process, uses a mix of primary sources, including census records, slave schedules, and newspaper archives, to get a sense of the institution of slavery throughout the city and which families played a role in perpetuating it. Thus far, she has identified 500 locations named after 200 slaveholding families. As the project expands, the founders plan to launch volunteer street teams and a website and app that will hold more information, a research database, and an interactive map of the city.

Waithe, Reso, and Robles are adamant the goal of their project is to make their research more widely accessible to the public, but as press coverage of and public attention to the project increased, many understood it as a call to change the city’s street names. Toward the end of the mayoral election, some residents and even debate moderators used the project as an opportunity to ask candidates whether they would change streets and institutions bearing the names of enslavers if elected. The Slavers of New York founders worry that in addition to the complexity of the street renaming process, changing those names without adequately reckoning with the history behind them could be just as harmless or fruitless as leaving them be.

Community-led solutions might look like adding plaques or historical markers that provide more context to the lives of the memorialized families and draw attention to their role as enslavers. For communities that decide to change their street names, it would also be great to leverage the wealth of creativity within the city and perhaps host a contest where residents can vote on who or what the places should be renamed, Waithe noted. Whatever the community decides, the Slavers of New York founders believe that process must involve a deepened understanding of the city’s history, its legacy, and who gets memorialized, and why.

The power to name the world

The power of projects like Slavers of New York and Reclaiming Black Spaces is how they provide entry points for more complicated questions about slavery and race. Raising those questions isn’t comfortable, and the feelings that such information stirs up speaks to the neighborhoods’ complexity and residents.

Waithe notes that white community members often lash out due to guilt and an unwillingness to confront this history, while Black community members cite either the pain of being reminded of the history or feelings of apathy about why this is a worthy cause to take up. Reso recalled how a friend of hers who volunteered to sticker signs was followed and interrogated by a white resident of Carroll Gardens who tore down the stickers. Reso also recounted an incident where a Black resident asked her why she was stickering a Brooklyn train station.

“Once he read [the sticker], I [saw] his face drop, and he’s like, ‘Why are you posting this? I don’t want to be reminded of this. We’ve moved past this.’” Reso said. “And he also made a comment about me—that he perceived me as white—and he was like, ‘White people coming into this neighborhood, can’t you do something more useful instead of digging this up?’”

The project founders are keen to recognize why Black residents, in particular, might have varied opinions of the project or consider it not a worthwhile endeavor on the full spectrum of issues impacting the community. While some have dismissed Slavers of New York as focusing on something trivial, the founders recognize that the project offers an example of the omnipresence of slavery in everyday life.

“In the grand scheme of things, is the street name oppressing me? Maybe not as much as the justice system does, but it just goes to show how pervasive, how down to the capillaries racism is that it affects [the names of] our streets,” Waithe said.

While the information Slavers of New York and Reclaiming Black Spaces bring to light can be painful, both share the goal of inspiring community members to learn more and organize amongst themselves to address both the history of slavery and how its remnants continue to show up in daily life and structure their neighborhoods. Reso pointed to the work of Paulo Freire, a radical Brazilian educator who said that having the power to name the world is having the power to change the world, and how that idea is central to Slavers of New York’s mission.

“Eric Adams [has said], he wants to change the street names after the Mayoral debate,” Reso said. ”That is still a little power that we [were able to use to] pressure the people with political power in the city. Being able to imagine a different future is in itself a practice in revolution.”

“Essentially, for something as small as a street name,” Waithe added, “being able to name, claim, determine your street, determine your neighborhood, who it honors, who it respects, and who it’s for, is a revolutionary concept.”

Until the full history of how New York has benefited from the labor of enslaved Africans is revealed, it will continue to shape the city’s future. In reminding us of what the past looked like, their offerings grant us permission to live in the present more truthfully and create our own calls to action.

HasanAbi reacts to Originality in Video Games by videogamedunkey