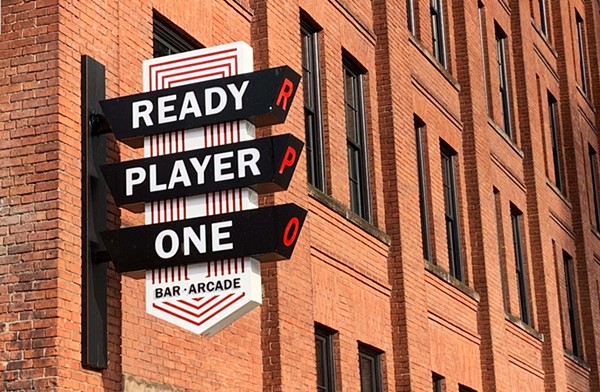 The coin-operated arcade games of Detroit’s Ready Player One have now become a thing of the past, just like the bygone era whose nostalgia they tapped into.

While it’s not clear exactly when the bar shut down, new owners were moving in when Metro Times visited on Wednesday morning.

Pizza Cat, a Toledo-based chain whose tagline is “keep pizza weird,” is planning to open up in the former arcade space. When we arrived on Wednesday, Pizza Cat owners Andre Robinson, Matt Wojtowicz, and their crew were moving in drywall through doors that still read “Ready Player One.”

Wojtowicz tells Metro Times they purchased the space in March thinking they’d open earlier, but there was a lot of work and cleaning to be done. They are now aiming for a June 1 opening date.

“Underneath all the arcade games were just layers of sticky sugar built up from where drinks had been spilled and all kinds of stuff that had never been cleaned up,” he says. “It was stuff that definitely could have gotten someone sick.”

About the pizza, Robinson says, “it’s gonna be the best-tasting thing you’ve put in your mouth besides your tongue.”

We’re not sure how he knows what’s been in our mouth, but their menu does have some interesting toppings like Flaming Hot Cheetos, pickles, and BBQ brisket with hemp crust, and chicken crust options for keto eaters. They also have bagel sandwiches and wings.

Pizza Cat announced the Detroit location on Instagram in March, though the exact location hadn’t been mentioned. The good news for gamers is that video games will still be part of the new business. According to that post, the restaurant will feature a “sit down experience, full bar, vintage arcade games, and nightlife.”

Meanwhile, the Instagram and Facebook pages for Ready Player One have disappeared, and the company hasn’t posted on Twitter since 2020. Our calls and emails to the business went unanswered.

So, to the people who have been asking on Twitter and Google whether Ready Player One is still open, the answer is no.