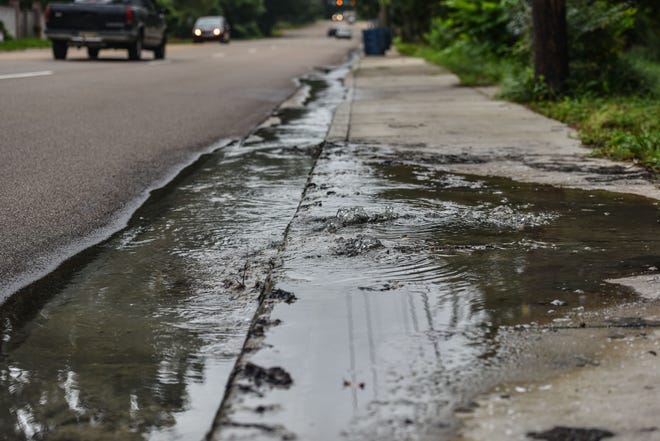 Raw sewage, a diaper, and feces flowed down Northside Drive in Jackson, between Ridgewood Road and Old Canton Road, on Thursday, according to residents of the area.

Those interviewed by the Clarion Ledger said it isn’t the first time it has happened, and that the city had given no indication of when the mess might be cleaned up or when the underlying sewer issue might be fixed.

One resident went out to walk his dog in the morning, only to find the sewage and alert neighbors.

“My neighbor told me about it this morning because he walked his dog,” Rose Hamilton said. “A drain, apparently underneath the street, has broken through the sidewalk, so whatever the goo and sewage is the water is pushing it up and then it’s draining further down the road back into a drainage ditch.”

Hamilton said she has tried to call the city’s water and sewer utilities division, but no one answered the phone. Another resident said they had to call multiple times in order to get someone to pick up, but there was no answer on a timeline for cleanup or repairs. Spokespeople for the city have yet to respond to a request for information.

Even when there is not visible sewage on the ground, there is often an offensive smell in the area, which is just down the street from some of the city’s most upscale shopping including Talbots, Whole Foods, lululemon and Kendra Scott, Hamilton said. She does not know whether it is coming from the sewage problems, the nearby Eastover Creek, or both.

“There’s a pervasive smell in the area, and you check your house and you know it’s not the house,” Hamilton said. “There’s the Eastover Creek that runs between the street and the street behind us. I don’t know if that’s what’s causing the smell if there’s something else in the city coming up through the drains, but the smell is always obvious like rotting sewage and grass and stuff.”

In a report, the city filed with the Environmental Protection Agency that covered a three-month period between April and June, the city said more than 50 million gallons of raw sewage had leaked into waterways, as a result of 235 separate overflows. The majority of that will end up in the Pearl River.

Hamilton has only lived in her house for about seven weeks, but she said she is already frustrated by the smell and the lack of a clear place to go to get help.

“I have really no idea who to tell anymore,” Hamilton said.