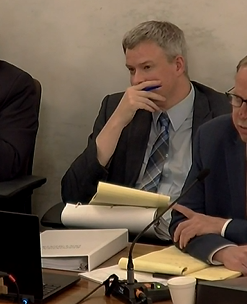 SIOUX FALLS, S.D. (AP) — Former South Dakota Attorney General Jason Ravnsborg has asked a state ethics board to press for an investigation of fellow Republican Gov. Kristi Noem. Ravnsborg blames the governor for his impeachment and removal from office last week (June 21, 2022) for his conduct surrounding a fatal crash in 2020. As attorney general, Ravnsborg last year filed a pair of complaints against Noem to the state’s Government Accountability Board. He alleges she inappropriately interfered in a state agency while it was evaluating her daughter’s application for a real estate appraiser license and misused state airplanes. The board has not made a decision on whether to investigate Noem. It’s working with an attorney to evaluate the merits of the complaints.