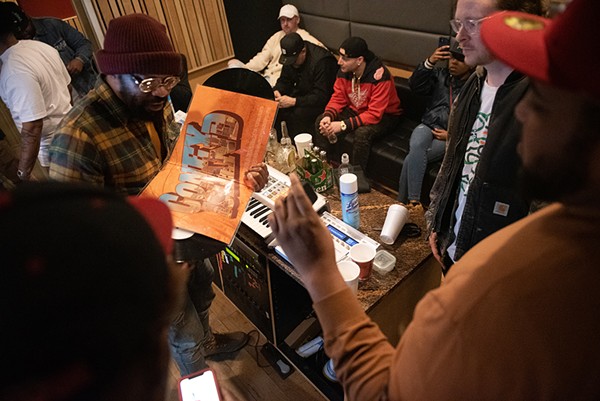 Nick Speed shows off his new record Coney Island at a listening party.

Nick Speed has worked with hip-hop heavyweights such as 50 Cent, Big Sean, Danny Brown, Quavo, and Elzhi. But his latest release, Coney Island, sees him collaborating with Ro Spit, an old friend and Pontiac native.

“I’ve been working with Ro since I first started making music, so it was easy to collaborate with him for Coney Island,” Speed tells Metro Times. “I wanted to showcase who he is as a human with my production.”

The album tells a story of two guys driving from Pontiac to Detroit for a party, while simultaneously taking listeners through a Detroit-styled adventure as the duo stops at a Coney Island. Both take a Havok and Wolverine Meltdown approach via storytelling through beats and rhymes.

“It’s nothing like going to your neighborhood coney/ Don’t get caught slipping, everybody there ain’t ya homie/ Got the bums and the crackheads begging for your money/ They’ll smile in your face but I swear that shit ain’t funny,” Ro spits on “Eddie V’s Freestyle.”

Some of the biggest surprises are “Where Da Hoes,” which sounds like a ’90s ghettotech anthem, and “846,” a well-executed after-hours house music ballad. Speed (self-admittingly) has never been known as a house music producer, so the splendid balancing of basslines and tempo under Ro Spit’s vocals make “846” perhaps the most standout (and surprising) song on the album.

“We’re both DJs, so I also wanted the music selection to reflect his DJ sets at his ‘Secret Garden’ parties,” Speed says. “When Ro asked me for beats, I remembered the many music conversations we have had and I incorporated everything from hardcore underground grimey hip-hop to house music and ghettotech to reflect what you would hear going out on any given night in Detroit.”

“Allstar Game” (featuring Jam Bino) uses a staccato-ish xylophone over a less-is-more type drum pattern to create the perfect head-nodding song. “Oc & Ill” (featuring Calmese) is a groovy cut meant for cruising East Jefferson on a Sunday night. Meanwhile, Ro Spit digs into his lyrical goodie bag on “Still Lit” (featuring Boldy James): “Bitch Please don’t compare me to so and so/ I get defensive like a Mayweather shoulder roll,” he raps.

The best thing about Coney Island is that it’s an ode to Detroit album without telling you over and over again, “This is an ode to Detroit album.” Listeners that are from Detroit will vibe and celebrate in a different way after hearing this than those that aren’t. Coney Island (the restaurant itself) is used physically but metaphorically as a melting pot that can connect hundreds of kinds of Detroit experiences. Although this is more of a concept album, each song stands on its own very effectively.

“You will hear our slang, our thought process, our music selection, how we party, what we believe in, how we grew up, our favorite meals from Coney Island restaurants, real-life situations of a Detroiter, anger, love, joy, and pain,” Speed says. “We wanted to show you every neighborhood in the city. That’s why we shout out almost every neighborhood Coney Island restaurant east side to west side.”

Coney Island gets a record release party from 9 p.m.-midnight on Thursday, April 21 at Spot Lite, 2905 Beaufait St., Detroit; spotlitedetroit.com. Limited-edition vinyl records will be available for purchase, and Nick Speed, Ro Spit, and Sheefy McFly will perform DJ sets. 21 and older only.