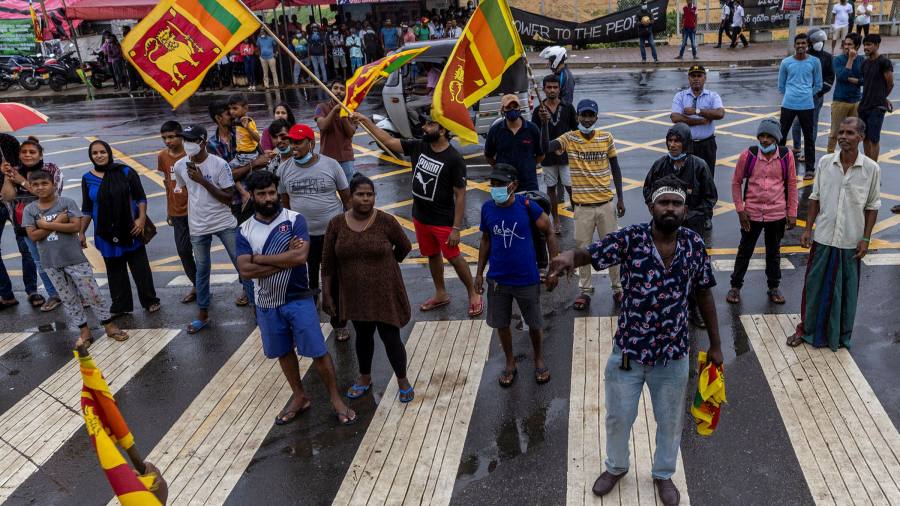 Protesters ranging from Catholic nuns to trade unionists gathered at the makeshift site along the seafront promenade in Sri Lanka’s capital Colombo, defying a curfew imposed in recent days to press their demands for President Gotabaya Rajapaksa to quit.

“We need our main demand to be achieved: the president should resign. There’ll be no agreement or solution before that,” said Hasintha Wijesekara, 39, an environmental scientist and member of a university teachers’ union, who was taking turns with colleagues to keep vigil at the camp.

Rajapaksa, heir of Sri Lanka’s most powerful political dynasty, has clung to office in the face of a growing protest movement and economic meltdown. Last week he appointed as prime minister former rival Ranil Wickremesinghe, a septuagenarian on his fifth term in the role, in a desperate effort to stay in power.

But the appointment of Wickremesinghe, an unpopular but experienced political operator who is the only MP from his party, has done little to appease the demonstrators who have set up camp on the promenade opposite the presidential offices. The prime minister “has had enough chances”, Wijesekara said.

Rajapaksa, a former military leader, and Wickremesinghe now need to convince not only Sri Lankans but donors ranging from China to the IMF that they can steer the island through its worst crisis in decades.

“The threat this time round for the Rajapaksas’ survival is real,” said Kusal Perera, a political commentator in Colombo. “They want someone to take over who could diffuse this heat, and after a while to negotiate an exit path for them.”

Sri Lanka, which once enjoyed the makings of an Asian economic success story, is on the verge of default after in effect running out of foreign reserves, with severe shortages of essential goods and debilitating power cuts.

Attacks on anti-government protesters by Rajapaksa supporters prompted a wave of retaliatory rioting last week. And the abrupt resignation of Gotabaya’s cabinet, which included his once-powerful brother Mahinda, left the country in effect without a government.

On being appointed, Wickremesinghe invoked Winston Churchill to underline that he viewed his task as no less Herculean than that faced by Britain’s wartime leader.

“Churchill had only four members backing him in 1939. How did he become prime minister? Because of the crisis. I’ve done the same,” he told journalists last week.

Sri Lanka, an enthusiastic high-yield bond issuer and participant in China’s Belt and Road infrastructure scheme, was due to repay about $8bn in overseas debt and interest this year on a total of more than $50bn in foreign credit. Yet with reserves at only tens of millions of dollars, Rajapaksa’s government suspended debt repayments last month and is in talks with the IMF.

Wickremesinghe has since his appointment met a series of foreign ambassadors including from China, the US and Japan as Sri Lanka seeks emergency loans to alleviate the crisis.

Rajapaksa had said he wanted to form a multi-party government to navigate the crisis rather than resign. Yet with resistance from opposition parties and an entrenched protest movement, the president-prime minister duo have been unable to form a full cabinet, so far appointing only four ministers who are all from Rajapaksa’s party. The island currently has no finance minister despite talks with the IMF, which are expected to drag out for months.

“The optimistic way of reading this is that [Wickremesinghe] is the best option available. He’s a seasoned politician,” Sally added. “The more pessimistic way of looking at this is that he’s been prime minister [before] and has already failed . . . How is this time any different?”

Barring a spell in opposition between 2015-2019, the Rajapaksa family has ruled Sri Lanka for most of the past two decades. With Mahinda as president and Gotabaya as defence secretary, they oversaw the end of a nearly three-decade civil war against the Tamil Tiger separatist group in 2009 with a brutal campaign in which both sides were accused of war crimes. The Rajapaksas dispute the allegations.

Sri Lanka rose to upper-middle income status as it borrowed heavily from international debt markets for an infrastructure-fuelled growth spurt. Successive governments refinanced and borrowed more despite warnings about the country’s growing debt.

But the island tipped into crisis after Gotabaya’s 2019 election, when he cut taxes heavily, imposed a destructive ban on fertilisers and changed the constitution to consolidate power around himself. The pandemic exacerbated this by cutting off tourism, a vital source of foreign currency.

“The lower and middle classes were pushed to the wall,” said Buwanaka Perera, a 26-year-old who has camped at the protest site for weeks. “Import restrictions hurt them while tax cuts helped the rich.”

The government continued to deny the crisis until protests forced an abrupt U-turn in March. Analysts say the island is now at risk of prolonged political instability that could further dampen its economic prospects.

Low global interest rates meant “they could borrow without thinking of tomorrow or the day after tomorrow”, Sally said. “I suspect right until the very end they thought that they could operate from their old play book.”

The president has turned to heavy handed tactics to quell protests, declaring a state of emergency and deploying the military with orders to shoot looters.

Eran Wickramaratne, an MP from Sri Lanka’s largest opposition party, said they would move a motion of “displeasure” when parliament reconvened on Tuesday. “The Rajapaksas have lost legitimacy,” he said. “People wanted a clean break . . . clearly this government will not be able to deliver.”