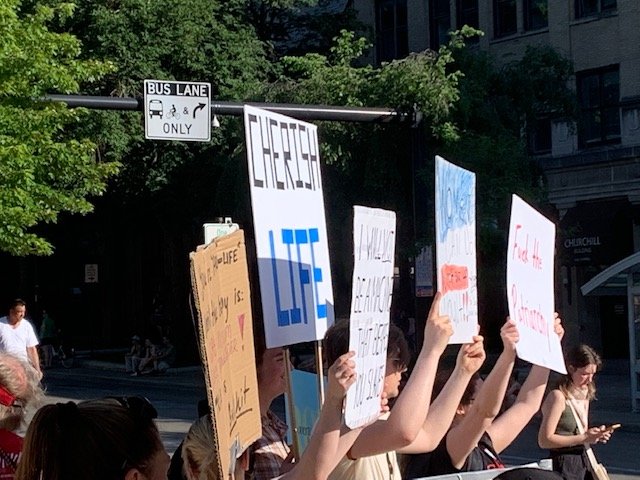 Protests erupted across the country as the far-left freaked out about the Supreme Court’s decision to overturn Roe v. Wade and return this issue back to the states where it belongs.

In Madison, Wisconsin, radicals swarmed the state’s capital building.  At one point a woman screamed, “F*ck the police” and the entire crowd repeated it after her. A 16-year-old boy was standing holding a sign that said “Cherish Life”.  He was soon surrounded by a group of topless painted women who began screaming at him and blocking his sign.

Others surrounded the young man.  A fellow American stepped up to support the young man and they began praying the rosary together.  The 16-year-old said that he drove two hours today to be there and and his mom wasn’t too happy but he knew he had to come. The left is trying to make the message that moving Roe v. Wade to the states is because God loving people don’t love women.  This is a lie.  Millions and millions of women in the US are pro-life. There were a few other protesters who joined at the capital to send a message about the horror of abortion. Today was a great day for freedom.  We’ll see what happens tonight and over the weekend.  We all know leftists are very violent and destructive.