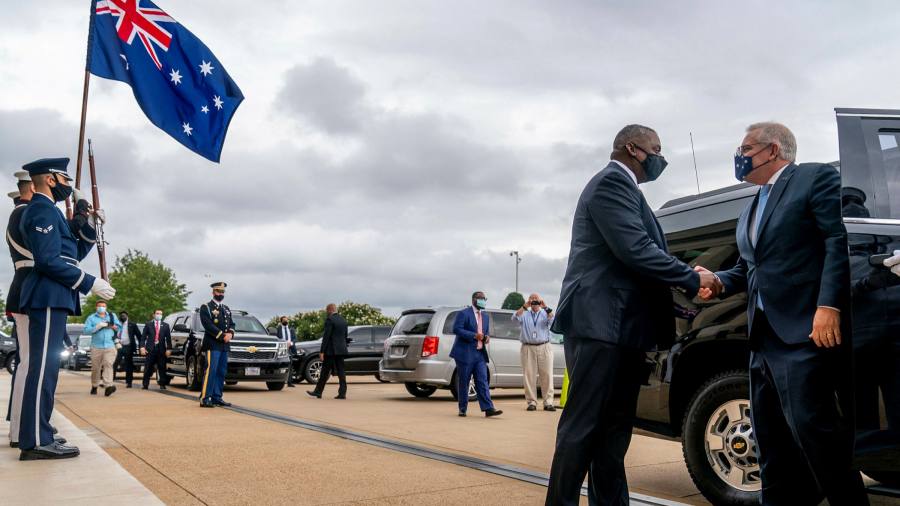 The creation of the Aukus security pact is expected to lead members of the Quad, a grouping of the US, Australia, India and Japan, to concentrate on non-military initiatives, government officials and analysts said ahead of the first in-person leaders’ meeting in Washington on Friday.

The Quad was revived in 2017 after a nine-year hiatus as China’s increasingly aggressive foreign policy heightened security concerns in Japan, India and Australia. The Trump administration saw the grouping as a vehicle to counter Beijing militarily.

But the Aukus deal signed last week between the US, UK and Australia to build nuclear submarines for Canberra has raised questions about the Quad’s purpose.

“Fifty per cent of the Quad comprises two-thirds of Aukus,” said Maria Rost Rublee, an associate professor at Monash University. “It will be dependent upon the Biden administration to be really clear where they want the Quad to head and if they want . . . India to be an invested partner.”

Japanese officials have welcomed Aukus as strengthening security relationships but they are keen to demonstrate that the Quad is an initiative capable of achieving its objectives through non-military means.

“The reason why Japan is taking part in Quad is because of aggressive actions taken by China and everybody knows it,” said Mitoji Yabunaka, a former vice-minister for foreign affairs and now a visiting professor at Ritsumeikan University. “But it is more of a diplomatic institution and it’s different from a military-oriented framework like Aukus.”

Harsh Vardhan Shringla, India’s foreign secretary, rejected suggestions that Aukus could supplant the Quad as the most important strategic initiative in the region, saying the group was a vehicle to pursue a “positive and constructive agenda” and focus on climate change, vaccines, emerging technologies and infrastructure.

Quad leaders are expected to emphasise broader co-operation on these issues as well as technologies such as chips — similar to their approach in an online summit in March — to help allay concerns among other Asian countries that the group’s only purpose was to contain China.

Several states want the US and other powers to be involved in the region in a way that counterbalances Beijing’s growing power but have reservations about purely military initiatives that could increase tensions or lead China to step up coercion against its neighbours.

Video: What does a Biden presidency mean for China?

Martijn Rasser, a technology and national security expert at the Center for a New American Security, a Washington-based think-tank, said the summit was poised to mark “a major step in achieving a comprehensive strategic technology partnership”.

“Effective collaboration and co-ordination in these and other areas would strengthen each country’s economic competitiveness and national security,” he added. “By also emphasising principles rooted in shared values, the Quad countries are shaping the contours of a new techno-democratic statecraft.”

But some experts said the group, which has identified 10 areas of potential co-operation this year, risked overextending itself as a number of its objectives may overlap with other international initiatives.

Hayley Channer, a former Australian defence official and now senior policy fellow at the Perth USAsia Centre, an Australian think-tank, said the group should focus on vaccine delivery, quality infrastructure, critical and emerging technologies and supply chain resilience. She said these were issues on which the governments were politically aligned and on which members could leverage their strengths and benefit neighbours.

“Multiple lines of effort suggest they haven’t decided what to focus on and prioritise,” she said. “The agenda appears to be driven more by the US, which encouraged the inclusion of climate change, and by capacities in member countries’ bureaucracies than by joint high-level policy decisions.”

Quad leaders are expected to discuss Aukus, mainly to ensure the pact does not create fissures.

“Aukus will help India’s objectives in the Indo-Pacific without asking India to do things it does not want to do,” said Tanvi Madan, a senior fellow at the Brookings Institution, a Washington-based think-tank. “It will extend Australia’s reach in the Indo-Pacific and keep the US engaged.”

But New Delhi is concerned about the rupture between France and the US and Australia, after Canberra cancelled a multibillion-dollar submarine deal with Paris to sign the new agreement, infuriating the government of Emmanuel Macron.

“For India, France is a resident power in the Indo-Pacific, the most activist European power in the region, plus a very close Indian defence partner,” said Madan. “India wants all its friends to play nice with each other as friendly fire only helps China.”

Tokyo has also watched nervously as US-France friction has intensified. “The political order we want to establish in this region is non-exclusive. We welcome Aukus but we also value co-operation with other countries,” said a Japanese foreign ministry official.

Another concern is that Australia could be distracted by Aukus. “No one really knows what the Quad is about, and it is rather loose,” said Monash University’s Rublee. “Aukus is much more clearly defined and delivers a significant national benefit. So while the current government will still be interested in the Quad, there will inevitably be less resources and time for the Quad.”

To counter such trends, analysts believe it is in Washington’s interests to ensure security co-operation remains an essential part of the grouping.

“Even though the summit will focus primarily on non-military issues, make no mistake that these four nations have security issues on their mind,” said Lisa Curtis, former senior director for South Asia at the National Security Council during the Trump administration and now at the Center for a New American Security. “The Quad’s commitment to a free and open Indo-Pacific is a way to push back against China’s increasingly assertive positions on its territorial claims in the East and South China Seas.

Google bets on the cloud breaking up