Putin threatens ‘asymmetric’ and ‘tough’ response to US sanctions 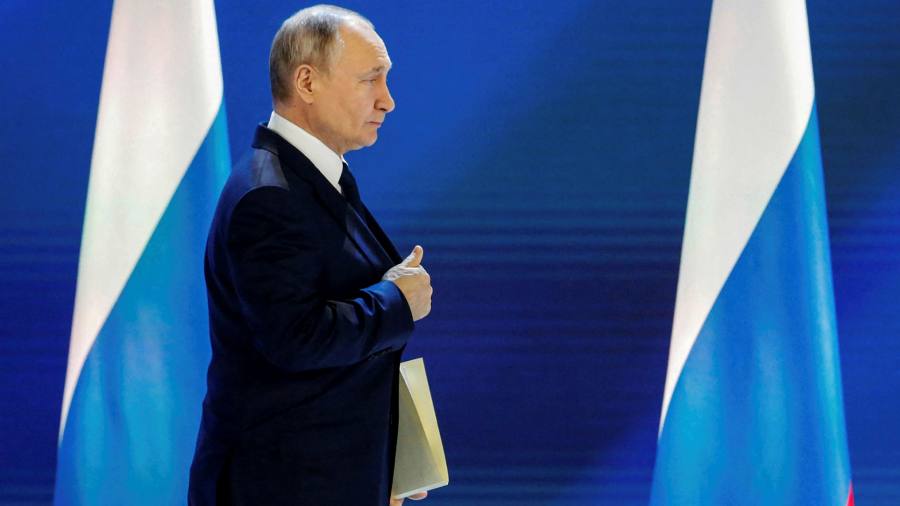 President Vladimir Putin has promised an “asymmetric” and “tough” response to what he claimed were western attempts to contain Russia.

Hours before supporters of jailed opposition leader Alexei Navalny were set to stage what they hoped would be the largest ever protests against his rule, Putin on Wednesday warned western countries against crossing a “red line” set by Moscow.

“We do not want to burn bridges. But if someone sees our good intentions as indifference or weakness . . . they should remember this: Russia’s response will be asymmetrical, it will be quick and it will be tough,” Putin said in his annual state of the nation address.

“Everyone who is coming up with provocations that are a threat to our interests will regret that, the way that they haven’t regretted something for a while,” he added. “I hope no one would think about crossing the red lines in relations with Russia. We will define where that red line is by ourselves, in every case.”

In his first public comments since the US introduced sanctions against Russia last week over the SolarWinds hack, Moscow’s alleged meddling in the 2020 election and Navalny’s jailing, Putin claimed that “unfriendly activities towards Russia are not stopping” and vowed to respond to “the blatant rudeness”.

“It has become like a new sport for them, who will be the loudest in speaking out against Russia,” Putin said. “They are picking on Russia without any reason.”

The speech, which lasted more than an hour, was more muted than recent state of the nation addresses when Putin used the occasion to announce constitutional changes or show off high-tech weaponry capable of delivering a first nuclear strike against the US.

Putin did not mention Russia’s massive military build-up on the Ukrainian border and only made coded references to Navalny’s movement, which he implied was part of a US strategy to overthrow Moscow’s allies in countries from Belarus to Venezuela.

Putin said: “Russia has its own interests. Interests we will defend and will uphold under international law. And if someone refuses to understand this obvious thing and does not want to engage in dialogue, and opts to look down upon us, Russia will have a way to defend its position.”

“Regrettably everyone is getting used to the politically motivated unlawful sanctions . . . attempts to impose their will on others,” he said. “That practice is now changing into something much more dangerous. By which I mean the fact that has emerged of an attempt to organise a coup in Belarus and assassinate the country’s president. Even such blatant actions are not condemned by the so-called western nations.”

With an eye on parliamentary elections in September and rising discontent over falling real incomes in Russia, Putin also outlined a number of new social spending plans including a Rbs10,000 ($130) to all parents of schoolchildren set to be paid out in August.

He also hinted at changes to Russia’s corporate tax system while referencing probable bumper profits for the country’s industrial groups this year. A massive oil spill caused by mining group Norilsk Nickel had prompted discussions over a potential new initiative to hold companies directly responsible for their impact on the environment, he added.

Though Navalny’s followers had warned that Russia “will descend into total darkness” if the protests did not succeed, the size of early demonstrations in Russia’s far east suggested that turnout at the planned nationwide rallies would be smaller than in January, when more than 100,000 people protested against the opposition leader’s jailing.

Turnout at Wednesday’s protest in Moscow was significantly lower than in January, when as many as 40,000 attended, but stretched well into the thousands, showing that Navalny’s core supporters were willing to brave bad weather and the threat of police violence.

Riot police sealed off the Manège square in front of the Kremlin, forcing protesters to clog the streets and wave their phone flashlights. The mood was relatively subdued as they chanted “Free Alexei Navalny” and “Putin is a thief”.

Police took a lighter touch than at the most recent protest in an apparent attempt to let it fizzle out on its own. Only about 400 people were arrested, according to independent monitor OVD-Info, down from the more than 10,000 detentions at the previous two rallies.

Veronika Pankova, a 20-year-old design student, said she hoped that “the more people that come out, the more people will realise you can’t keep quiet [about Navalny’s detention]”.

“I really don’t like the way things are going and I hope they’ll start changing for the better,” she said.

Only about 1,000 people came to protest in Vladivostok, a city on the Pacific coast, according to local media — a quarter of the number that had expressed interest by signing up on Navalny’s website. Some of Navalny’s top allies left the country in the days leading up to the demonstration, while police detained several activists across the country for organising it.

Watchdog says ICE may have deported up to 70 U.S. citizens, arrested hundreds more in recent years