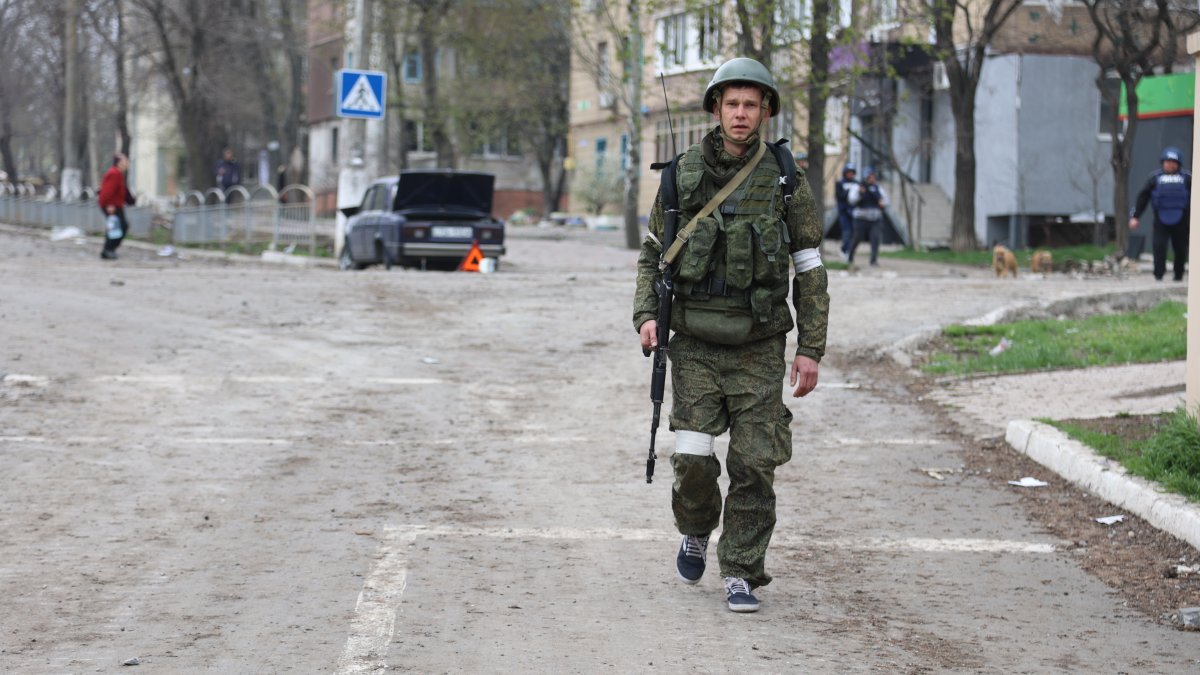 Russian President Vladimir Putin ordered his forces not to storm the last remaining Ukrainian stronghold in the besieged city of Mariupol on Thursday but instead to block it “so that not even a fly comes through.”

His defense minister, Sergei Shoigu, said the rest of the city beyond the sprawling Azovstal steel plant where Ukrainian forces were holed has been “liberated” — as Russian officials refer to areas of Ukraine they have seized. Putin hailed that as a “success.”

But leaving the plant in Ukrainian hands robs the Russians of the ability to declare complete victory in Mariupol, which has seen some of the most dramatic fighting of the war and whose capture has both strategic and symbolic importance.

The scale of suffering there has made it a worldwide focal point, and its definitive fall would deprive Ukraine of a vital port, complete a land bridge between Russia and the Crimean Peninsula, and free up Russian troops to move elsewhere in the Donbas.

Putin and Shoigu’s comments appeared to reflect a change in strategy in Mariupol, where the Russians previously seemed determined to take every last inch of the city. But it was not clear what it would mean in practical terms.

Ukrainian officials did not comment on the latest remarks, but earlier said four buses with civilians managed to escape from the city after several unsuccessful attempts. Thousands more remain in the city, much of which has been reduced to a smoking ruin in a nearly two-month siege, with over 20,000 people feared dead.

Ukraine’s Deputy Prime Minister Iryna Vereshchuk said another attempt to evacuate civilians from Mariupol would be made Thursday — though it was not clear how the latest comments would affect that.

In Kyiv, Spain’s Prime Minister Pedro Sánchez and Denmark’s Mette Frederiksen became the latest European leaders to show support with a visit to the capital. They were due to meet with President Volodymyr Zelenskyy, who warned in a video address overnight that the Russians were not “abandoning their attempts to score at least some victory by launching a new, large-scale offensive.”

“The West stands together to support the Ukrainian people,” Frederiksen, the Danish prime minister, said in a statement.

Meanwhile, the Kremlin said it submitted a draft of its demands for ending the war, and the West raced to supply Ukraine with heavier weapons to counter the Russians’ new drive to seize the industrial east.

Britain’s Defense Ministry said in an assessment that Russia likely desires to demonstrate significant successes ahead of its annual May 9 Victory Day celebrations. “This could affect how quickly and forcefully they attempt to conduct operations in the run-up to this date.”

As fears grew for the fate of civilians in Mariupol, the Kyiv regional police said Thursday that two mass graves with nine bodies were discovered in the city of Borodyanka, northwest of the capital. The findings added to thousands of civilians reported killed by Russian forces, who have been accused of wholesale abuses of Ukrainians.

Head of the Kyiv regional police, Andriy Nebytov, said two women and a teenager were among the “civilians killed by the Russian occupiers.”

“I want to stress that these people are civilians. The Russian military deliberately shot civilians that didn’t put up any resistance and didn’t pose any threat,” Nebytov said, adding that some of the victims were apparently tortured.

With global tensions running high, Russia reported the first successful test launch of a new type of intercontinental ballistic missile, the Sarmat. President Vladimir Putin boasted that it can overcome any missile defense system and make those who threaten Russia “think twice.” The head of the Russian state aerospace agency called the launch out of northern Russia “a present to NATO.”

The Pentagon described the test as “routine” and said it wasn’t considered a threat.

A group of 11 Ukrainians arrived at Ballindooley castle in Galway, Ireland, to escape violence in Ukraine.

On the battlefield, Ukraine said Moscow continued to mount assaults across the east, probing for weak points in Ukrainian defensive lines. Russia said it launched hundreds of missile and air attacks on targets that included concentrations of troops and vehicles.

The Kremlin’s stated goal is the capture of the Donbas, the mostly Russian-speaking eastern region that is home to coal mines, metal plants and heavy-equipment factories. Detaching it from the rest of Ukraine would give Putin a badly needed victory two months into the war, after the botched attempt to storm the capital, Kyiv.

The U.K. Defense Ministry said Russian forces were advancing from staging areas in the Donbas toward Kramatorsk, which continues to suffer from persistent rocket attacks.

The Luhansk governor said Russian forces control 80% of his region, which is one of two that make up the Donbas. Before Russia invaded on Feb. 24, the Kyiv government controlled 60% of the Luhansk region.

Gov. Serhiy Haidai said the Russians, after seizing the small city of Kreminna, are now threatening the cities of Rubizhne and Popasna. He urged all residents to evacuate immediately.

“The occupiers control only parts of these cities, unable to break through to the centers,” Haidai said on the messaging app Telegram.

Analysts have said the offensive in the east could become a war of attrition as Russia faces Ukraine’s most experienced, battle-hardened troops, who have fought pro-Moscow separatists in the Donbas for eight years.

Russia said it presented Ukraine with a draft document outlining its demands for ending the conflict — days after Putin said the talks were at a “dead end.”

Kremlin spokesman Dmitry Peskov said that “the ball is in their court, we’re waiting for a response.” He gave no details on the draft, and it was not clear when it was sent or whether it offered anything new to the Ukrainians, who presented their own demands last month.

Zelenskyy said he had not seen or heard of the proposal, though one of his top advisers said the Ukrainian side was reviewing it.

Moscow has long demanded Ukraine drop any bid to join NATO. Ukraine has said it would agree to that in return for security guarantees from other countries. Other sources of tension include the status of both the Crimean Peninsula, seized by Moscow in 2014, and eastern Ukraine, where the separatists have declared independent republics recognized by Russia.

Earlier this week, Ukraine said the Russians dropped heavy bombs to flatten what was left of the Azovstal steel plant.

A few thousand Ukrainian troops, by the Russians’ estimate, remained in the plant and its labyrinth of tunnels and bunkers spread out across about 11 square kilometers (4 square miles). Zelenskyy said about 1,000 civilians were also trapped.

A Ukrainian apparently in the plant posted a Facebook video urging world leaders to help evacuate people from the plant, saying, “We have more than 500 wounded soldiers and hundreds of civilians with us, including women and children.”

The officer identified himself as Serhiy Volynskyy of the 36th Marine Brigade and warned: “This may be our last appeal. We may have only a few days or hours left.” The authenticity of the video could not be independently verified.

Russia has repeatedly issued ultimatums to the defenders to surrender, but the Ukrainians have ignored them.

More than 100,000 people overall were believed trapped in Mariupol with little if any food, water, medicine or heat. The city’s pre-war population was 400,000.

A Zelenskyy adviser, Mykhailo Podolyak, said on Twitter that he and other Ukrainian negotiators were ready to hold talks without conditions to save the lives of trapped Mariupol defenders and civilians. There was no immediate response from Russia.

Elsewhere, some residents of the eastern city of Kharkiv have lived in basements for weeks, trying to stay safe from Russian shelling. With no running water, gas or electricity, they collect rainwater and cook on open fires, burning debris from destroyed wooden buildings.

In one neighborhood, they sought safety in a school basement — using desks, tables and chairs to fashion beds. More than 300 people slept there during the first days of the war, but most have left for safer places, and only a few dozen remain.

Stirring a large pot of a thin vegetable soup, a woman said volunteers brought cabbage, beets and canned beans. “We mixed everything together and made borscht,” said Natasha, who gave only her first name.

As Russia funneled troops and equipment into the Donbas, Western nations rushed to boost the flow of military supplies to Kyiv for this new phase of the war — likely to involve trench warfare, long-range artillery attacks and tank battles across relatively open terrain.

U.S. President Joe Biden was set to announce plans Thursday to send more military aid to Ukraine, according to a U.S. official who was not authorized to comment publicly and spoke on the condition of anonymity.

Zelenskyy said Ukraine’s Western allies have “come to understand our needs better,” adding that Ukraine is receiving new shipments of Western weapons “now, when Russia is trying to step up its attacks, not in weeks or in a month.”

Putin, meanwhile, boasted that the Sarmat missile has “no equivalents in the world.” The Sarmat is intended to eventually replace the Soviet-built missile code-named Satan by NATO as a major component of Russia’s nuclear arsenal.

It will ”make those who, in the heat of frantic, aggressive rhetoric, try to threaten our country think twice,” Putin said.

Associated Press journalists Mstyslav Chernov and Felipe Dana in Kharkiv, Ukraine; Yesica Fisch in Kramatorsk, Ukraine; and Robert Burns and Aamer Madhani in Washington contributed to this report, as did other AP staff members around the world.