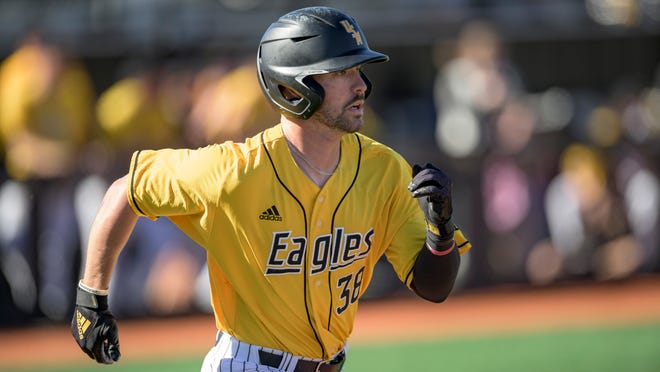 HATTIESBURG — From his post in the third-base dugout, Southern Miss head coach Scott Berry found himself hoping for a bit of batted-ball luck that never came.

A four-run Golden Eagle lead over LSU entering the ninth inning dwindled to three. Then it shrunk to one. Then a grounder off the bat of Jordan Thompson narrowly avoided the outstretched glove of Dustin Dickerson, accomplishing what had been just about unthinkable only minutes before. The game was tied at six.

Southern Miss escaped the ninth inning to force extras, but the fight was over. The Tigers secured their victory with a walk-off fielder’s choice by Josh Pearson.

“As the momentum starts swinging a little bit, you just hope, ‘Man, just hit it to somebody. Hit it at somebody,'” Berry said. “Because it was obvious that we weren’t able to punch them (out).”

Golden Eagles closer Landon Harper, who entered this game with a 2.21 earned-run average, brought the Tigers down to their final strike twice. The first instance resulted in a two-run blast by Cade Doughty that trimmed the deficit to a single run.

“We couldn’t get the one pitch,” Berry said.

The Southern Miss bullpen, suffocating all season, could not close the door. The Tigers, who used a 10-run eighth inning to erase a seven-run deficit in their opening game of the Hattiesburg Regional, refused to give away at-bats even when the outcome seemed decided.

Garrett Ramsey, the owner of a 2.35 ERA through his first 20 appearances of the season, came on looking to bail Harper out in the bottom of the ninth.

He surrendered the tying single to Thompson before closing the inning with a strikeout. With Ramsey back out for the 10th, LSU loaded the bases before registering an out.

His replacement, Tyler Stuart, was unable to complete the impossible escape act the situation required.

“We had our guys who brought us to this dance in the game,” Berry said. “They’ve been proven and they’ve been in those situations before.”

The collapse spoiled a fantastic outing by sophomore righthander Hurston Waldrep, who LSU coach Jay Johnson named one of the two best starters the Tigers have faced all season.

Waldrep struggled with his control early on, but settled down to retire 11 LSU batters in a row beginning in the third inning, including six consecutive strikeouts. He pitched 6⅔ innings, allowing two runs and striking out 11 – tying a school record for whiffs in an NCAA Tournament game.

“You can’t really focus on the outing when you didn’t get the win,” Waldrep said. “As a team, you’re fighting for that win.”

That type of emotion is something Berry and the Golden Eagles will have to combat. The schedule offers them little time to recover from this sucker punch, with an elimination game against Kennesaw State set for Sunday afternoon (1 p.m., ESPN+).