Since May 10, 2018, a federal “No Discharge Zone” (NDZ) has made it illegal to discharge both treated and untreated sewage from boats and vessels into Puget Sound.

Vessel sewage can contain bacteria and viruses that are harmful to people and the environment. These contaminants are harmful to water quality, beaches, and shellfish beds. Eating shellfish that have been exposed to pollution can make people sick. The presence of one type of bacteria, fecal coliform, has closed shellfish beds throughout Puget Sound.

While this is Washington’s first NDZ, there are more than 90 No Discharge Zones in 27 states. The U.S. Environmental Protection Agency (EPA) approved the Puget Sound NDZ and has continued to approve NDZs across the country, including a new NDZ in Maryland on Dec. 16, 2019. View the full list of EPA-approved NDZs.

We are implementing the NDZ and Washington’s boaters are using the more than 100 pumpout stations in Puget Sound. We have seen approximately 700 acres of shellfish beds reopen since implementation, a sign that the NDZ is working to protect and restore Puget Sound.

At the same time, a coalition of marine businesses have challenged the NDZ in federal court. While the U.S. District Court for D.C. has not yet ruled on the case, there are recent developments in the case and we wanted to share the current status of Washington’s NDZ. 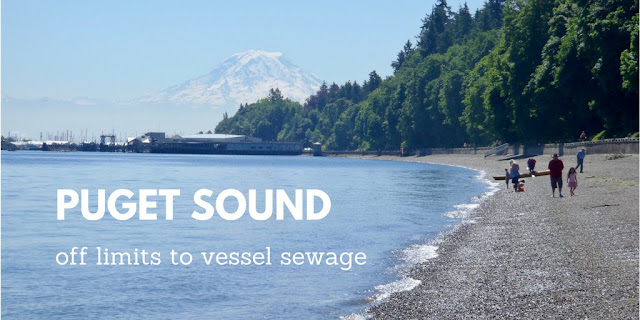 In December 2018, the American Waterways Operators (AWO) filed suit in federal court  against EPA, challenging EPA’s determination that there are adequate pumpout facilities in Puget Sound to support a No Discharge Zone. We intervened in the AWO lawsuit because we support the NDZ and know it is a critical part of helping restore and protect Puget Sound.

The court granted our motion to intervene on March 25, 2019. Washington Environmental Council, Puget Soundkeeper, and Friends of the Earth were also granted intervention.

What’s next for Washington’s NDZ?

We will continue to implement the NDZ as the court case proceeds. We believe EPA correctly determined there are adequate pumpout facilities in Puget Sound to support the Puget Sound NDZ and are confident the court will ultimately rule in Washington’s favor.

There are well over 100 recreational and commercial pumpouts on Puget Sound and funding is available through Washington State Parks grants to establish more. Washington boaters are already using these convenient locations to safely dispose of vessel sewage.

We provided an extended compliance timeframe for the rule, so some operators, including tug boats, have until 2023 to fully retrofit all their vessels to hold sewage. Vessel operators have begun investing in retrofits to comply with the rule.

Investments in the newly upgraded shellfish beds have begun and we expect more good news as the NDZ continues to be a part of Puget Sound.

Why does Washington have an NDZ?

We established the NDZ to stop the discharge of vessel
sewage into our waters.  Puget Sound
is a regional treasure of great economic importance and preventing vessel
sewage from being released throughout Puget Sound is a common sense decision. The
NDZ is an important part of protecting and
restoring the sound.
Additional NDZ information is available on our NDZ webpage.