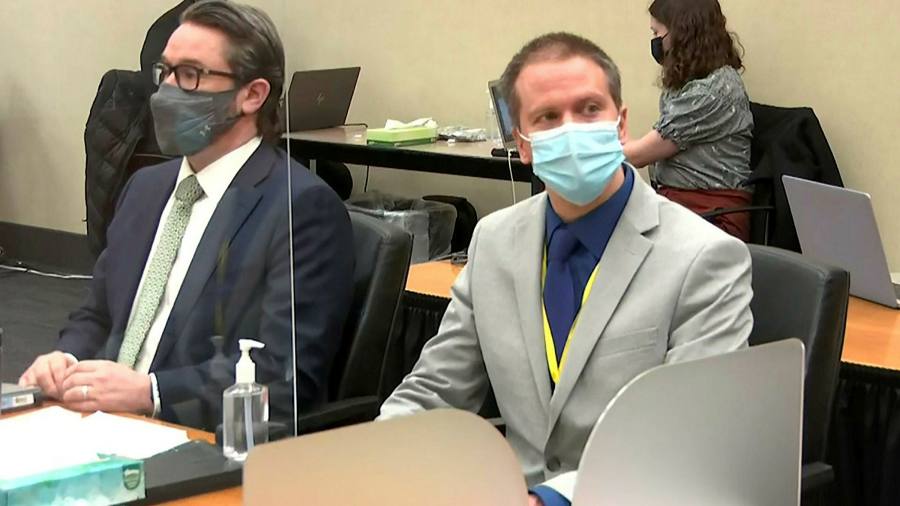 Steve Schleicher finished his nearly two-hour argument Monday by returning to a theme the prosecution raised in opening statement: jurors can believe what they saw in the video of Floyd’s death.

“You can believe your own eyes,” he said. “This case is exactly what you thought when you saw it first with that video . . . It’s what you felt in your gut. It’s what you now know in your heart. This wasn’t policing, this was murder. The defendant is guilty of all three counts. All of them, and there’s no excuse.”

Defence attorney Eric Nelson will follow Schleicher, as both sides make their last pitches to jurors after weeks of testimony before they must decide on a verdict. The case is being closely watched in Minneapolis and across the US as a referendum on the degree to which US police officers will be held accountable for killing black Americans.

Many across the metro area have said riots could result if the jury acquits Chauvin. The National Guard is on the streets of Minneapolis and nearby in suburban Brooklyn Center, where police used tear gas and rubber bullets against protesters last week as they demonstrated against the killing of another black man by a police officer.

Chauvin is charged with second- and third-degree murder, and second-degree manslaughter. Chauvin knelt on Floyd’s neck for more than nine minutes while arresting him on the suspicion of using a counterfeit $20 bill. A teenage bystander filmed the incident, then published the footage online, leading to outrage and worldwide protests against racial injustice.

The potential maximum penalty ranges from 10 years for manslaughter to 40 years for second-degree murder.

Closing arguments allow lawyers to sum up their view of a case, placing all testimony and other evidence in context to support their theory of events. Prosecutors bear the burden of proving a defendant’s guilt “beyond a reasonable doubt”. Conviction in the US legal system requires a unanimous vote by the jury.

Schleicher told jurors they should set aside any preconceived notions that police officers cannot commit crimes, or that police generally were put on trial.

“You need to set aside the notion that it is impossible for a police officer to do something like this,” he said, “He’s not on trial for who he is. He’s on trial for what he did.”

Schleicher also attempted to counter stereotypes regarding black men, telling the jury to disregard Floyd’s addition to opioids and an officer’s testimony about suspects’ potential for “superhuman strength”.

“George Floyd is not on trial here,” he said.

The trial has lasted six weeks, including three weeks to select the jury and three weeks of testimony.

A key part of the prosecution’s case was video of Floyd’s death, which they played multiple times. They called 38 witnesses during the trial, including Minneapolis police chief Chief Medaria Arradondo, who condemned Chauvin’s actions, saying “It’s not part of our training and it’s certainly not part of our ethics or values.”

One of the questions at the heart of the case has been what caused Floyd’s death and whether Chauvin’s actions constituted a reasonable use of force. Defence attorney Eric Nelson has blamed Floyd’s health problems and drug use for his death as he attempts to create reasonable doubt regarding Chauvin’s culpability.

Dr Andrew Baker, the current Hennepin County medical examiner, testified that the force Chauvin and other responding officers used when arresting Floyd was more than his weakened heart could withstand. He ruled the death last May a homicide.

Chauvin did not testify during the trial, invoking his Fifth Amendment right against self-incrimination. One of the primary witnesses for the defence, Barry Brodd, a use-of-force expert, said on Tuesday that Chauvin’s actions were justified and that he acted “with objective reasonableness following Minneapolis police department policy”.

Four days later vandals left a severed pig’s head near the porch of a home in Santa Rosa, California, where Brodd used to live, “apparently targeting Mr Brodd for his testimony”, according to the Santa Rosa Police Department.

Dr David Fowler, former chief medical examiner of Maryland, said he thought Floyd died from a cardiac arrhythmia, or irregular heartbeat, because his heart was in poor condition when police officers restrained him, and was further taxed by fentanyl and methamphetamine.

Fowler also suggested that carbon monoxide poisoning from car exhaust could have played a role in his death. Responding to that testimony, Tobin said Floyd’s blood could not have had more than 2 per cent of the gas in his blood at the time of his death, a percentage within the normal range.

BEST BOOKS ABOUT TIGERS – Tigers In the Wild