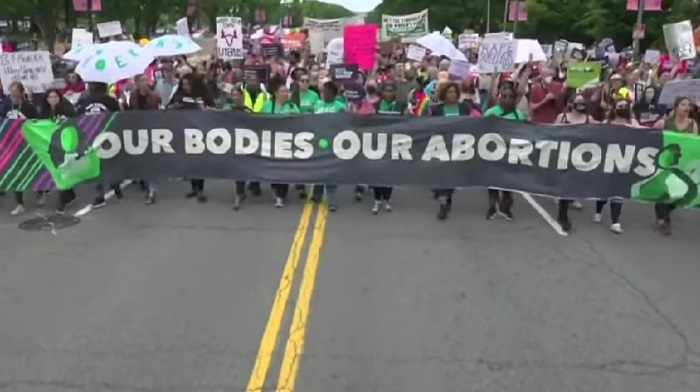 The Women’s March has announced an official kickoff to a ‘Summer of Rage,’ a protest designed to pressure President Biden to take executive action in order to protect abortion.

The so-called Women’s March group was born (pun intended) when the group protested the day after President Trump was inaugurated in 2017 – famously donning “pussy hats.”

In a message posted Tuesday morning, the official Twitter feed for the group called out the President and congressional Democrats specifically.

“The Summer of Rage is just starting, and we aren’t going anywhere until abortion access is protected,” they wrote.

The initial event is slated to take place on July 9th in Washington, D.C.

In a follow-up post, a banner is revealed with a very modern-day Viking-esque, militant looking individual and a caption reading: “We already won the White House, the Senate, and the House of Representatives. We don’t need to wait to vote again, we can take action NOW.”

The Summer of Rage is just starting, and we aren’t going anywhere until abortion access is protected. pic.twitter.com/0ZXYI71VaV

‘Summer of Rage’ Set to Begin

Clicking on the accompanying link takes you to a ‘Summer of Rage’ signup page which hints at their intentions.

“Are you outraged? Are you disgusted? Are you ready to throw down?” they ask. “We are.”

“We will not be silent. We will not be ignored. And we will not let politicians play games with our lives and our futures,” the group adds. “If our leaders won’t take action, we will.”

The Summer of Rage is just starting. We need people in this fight in every city and state across this country. Join us.https://t.co/DLwNenjz7l

It’s impossible to be certain, but the likelihood that a group from the right announcing similar actions and not already being under surveillance, if not under arrest, is slim to none.

In a previous tweet, the Women’s March declares that they will become “ungovernable during our Summer of Rage.”

We’ve had enough of our government refusing to take action.

It’s going to take all of us becoming ungovernable during our Summer of Rage before we see the change that we need.

Advertising a ‘Summer of Rage’ might not be the best idea considering Justice Brett Kavanaugh was the victim of an assassination attempt, conservative members of the Supreme Court have been doxxed, and there have been nearly 50 attacks on pro-life centers across the country.

Tensions are high after the Supreme Court issued a ruling that effectively overturns Roe v. Wade.

And considering the 2020 race riots set the bar kind of high for rage, it will be difficult to top them in the eyes of the radical left by any other means than to deliver … more rage.

Other pro-abortion extremist groups have joined the call for a ‘Summer of Rage.’

“Now the leash is off,” one such group, Jane’s Revenge, said in a blog post. “And we will make it as hard as possible for your campaign of oppression to continue. We have demonstrated in the past month how easy and fun it is to attack.”

The group has vowed “open season” on pro-life pregnancy centers.

Jane’s Revenge has already taken credit for violence and vandalism directed at pro-life groups, including, according to Fox News, “numerous acts of firebombing, vandalism, and arson in the name of abortion rights.”

I’m proud to author H.R. 8196 to designate groups like Jane’s Revenge and Ruth Sent Us as terrorist organizations.

The Democratic National Committee opted out of a partnership with the Women’s March in 2019, with one source citing a growing number of instances of anti-Semitism amongst the group’s leadership at the time.

The Women’s March signup page asks participants to place themselves into one of two categories – those willing to ‘risk arrest’ and those looking simply to volunteer.

It’ll be interesting to see if the Capitol police are heralded as heroes and defenders of democracy if arrests are made when the ‘Summer of Rage’ crosses the line.