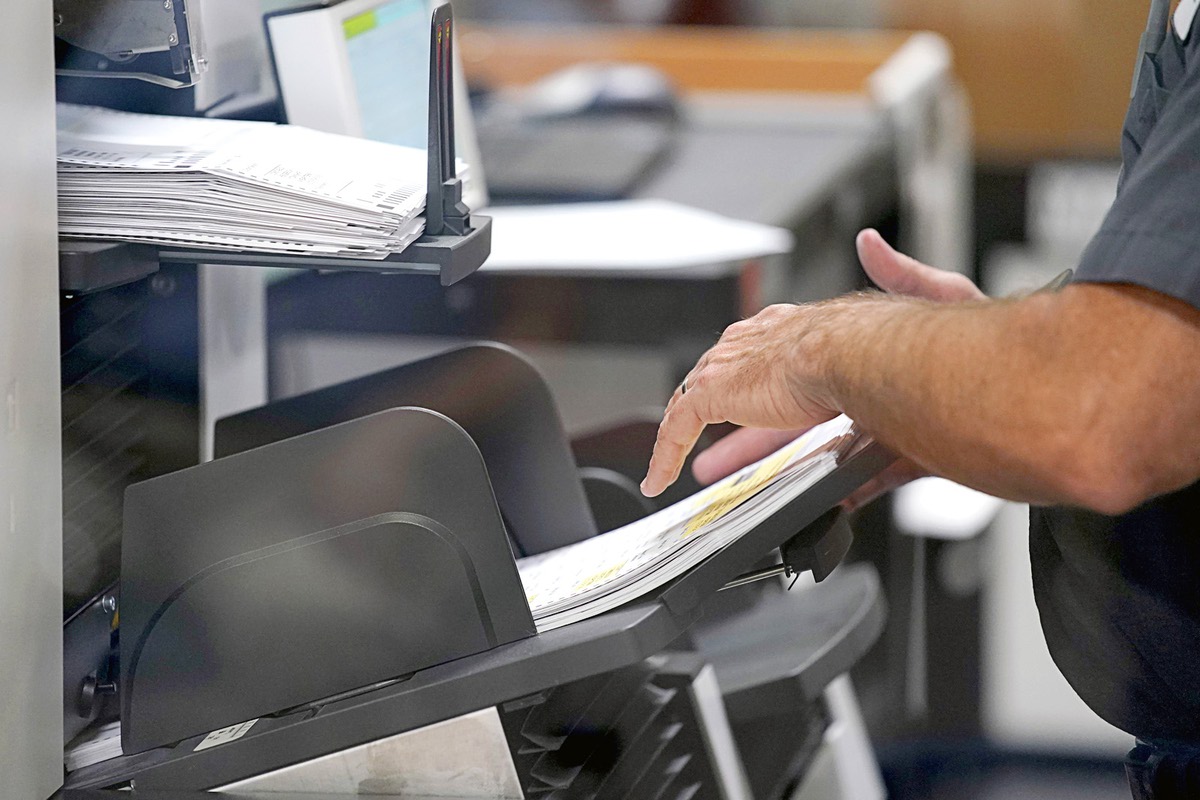 An election worker feeds ballots into a machine during a recount of mail-in ballots at the Clark County Election Department, Thursday, June 30, 2022, in North Las Vegas, Nev.

Counties recertified their election results last week after a recount sought by Reno Attorney Joey Gilbert, who lost to Clark County Sheriff Joe Lombardo in the GOP primary election by about 26,000 votes, was complete.

Little changed in the vote totals after county election officials completed their recounts.

On Thursday, the Clark County Commission, in a 5-0 vote, certified the recount results of the Republican primary here. Clark County is the state’s most populous county.

There were fewer votes because of the adjudication process, where a board reviews ballots that were identified as having a double vote. In those cases, the voter did not follow state statute in properly crossing out a name, Gloria said.

In Washoe County, No. 2 in population, county commissioners on Thursday approved 3-1 the recount results, with Commissioner Jeanne Herman voting no. The recount showed an additional two votes for Gilbert and no change in votes for Lombardo, with Lombardo still winning the county by more than 300 votes.

Jamie Rodriguez, government affairs manager for Washoe County, said during the meeting that the election department believed the two additional votes were approved in the adjudication process.

Gilbert did not expect to win the recount; rather he had to ask for it to officially contest the election results in court. He maintains he won, saying in a July 5 Facebook video that in Clark County he won 30,000 more votes than were reported. Gilbert argues that Democrats rigged the election in favor of Lombardo because they know he will not be able to defeat Gov. Steve Sisolak, the Democratic incumbent, in the fall.

“Is this all by design?” Gilbert said. “They knew I was Sisolak’s worst nightmare, the only one to call him out on everything, to keep it real.”

Why does this matter? Gilbert’s attempts to overturn the election results are an echo of what happened in 2020 as well as possibly a harbinger for what is to come when candidates refuse to accept that they lost an election.

Crying foul when a candidate loses has occurred before — in 2016, Democrats criticized the election results when Hillary Clinton lost, although not nearly to the extreme as Republicans’ claims that the 2020 election was stolen. The “Big Lie” claims of the 2020 election, which precipitated an insurrection at the U.S. Capitol, have paved the way for more candidates who lose to claim fraud.

And we could be seeing it again in November.

The Republican State Leadership Committee released results last week of a statewide survey done in Nevada by Cygnal, a predictive analytics and market research firm that serves GOP campaigns and committees, which confirmed other polls and research analysts that predict a Republican wave.

The committee focuses on getting Republicans elected in races down the ballot, such as to the Nevada Legislature.

The poll found that voters want the Legislature to serve as a “check and balance” on President Joe Biden, according to a memo from Cygnal. Forty-one percent of respondents believe the state is “headed in the right direction,” while 47% believe it is on the wrong track.

Forty-two percent of respondents support the elected Democrats in the Legislature while 48% do not, according to the poll.

Forty percent of those surveyed want the Legislature to support Biden’s agenda, while 52% want it to push back on the president.

Thirty-eight percent of Nevadans named the cost of living as the top issue they wanted addressed, as well as creating jobs and growing the economy, according to the poll.

The survey was conducted June 28-30 with 600 likely general election voters, and it has a margin of error of 3.99%, according to Cygnal.

“Nevada Democrats in the Legislature have Nevada at the bottom of the list on every key economic metric as a result of being in lockstep with President Biden’s failing liberal agenda,” Mason Di Palma RSLC deputy communications director, said in a statement. “Nevadans deserve a state legislative body that works for them and not Democrats in Washington, D.C. Republicans are building momentum in Nevada and will continue holding Democrats accountable for their failed record as we near November.”

Like all polls, this should be taken with a grain of salt. But it does match with other polls and surveys across the state and nation. Democrats have a lot of work to do between now and November.

Congress was out of session last week, giving Nevada’s federal delegation time to tour and learn about different issues around the state.

Sen. Jacky Rosen, D-Nev., toured rural Nevada, going to Elko, Winnemucca, Battle Mountain, Goldfield and Tonopah. At the Elko Regional Airport, she learned about different projects that were funded by the Infrastructure Investments and Jobs Act. In Tonopah, she toured the Tonopah Mining Park Museum and visited the Tonopah Brewing Company to learn about how she can help address the challenges facing small businesses, Rosen’s office said in a statement.

Sen. Catherine Cortez Masto, D-Nev., met with Culinary Union workers last week at the MGM Grand and talked about how she is trying to help working families.

Rep. Dina Titus, D-Nev., and other members of the Congressional Caucus on Hellenic Issues released a statement in objection to the Biden administration’s plans to proceed with the sale of F-16 jets to Turkey.

“While Turkey’s relenting on their opposition to Sweden and Finland joining NATO is a welcome development, there are still too many outstanding issues to move forward with the sale of F-16s to (President Recep Tayyip) Erdoğan’s government,” the statement says. “Over the last decade, Turkey has not been a productive member of NATO nor a reliable ally to the U.S.”

Titus, along with Reps. Chris Pappas, D-N.H.; Charlie Crist, D-Fla.; Carolyn Maloney, D-N.Y.; Frank Pallone, D-N.J.; and John Sarbanes, D-Md., listed concerns in the statement, such as the U.S.-made warplanes being used to enter Greek airspace and Erdoğan announcing he is on the “verge of reinvading Syria” with the intention of targeting Kurdish forces in the north.

“The administration has provided no information on how it would ensure these individuals, whom we have relied on in the past and may need to do so in the future, will be protected from U.S.-developed weaponry,” the statement says.

If the F-16 planes are used to enter Greek airspace, the statement says, it would violate the Arms Export Control Act, which only allows the transfer of equipment for self-defense operations.

“Until the administration can provide suitable answers on how they intended to mitigate the above-listed concerns, we will continue to object to this weapons transfer and do everything we can to ensure that these F-16s are not delivered to the Turkish government,” the statement says.

Rep. Mark Amodei, R-Nev., announced last week that his 2nd Congressional District in Northern Nevada was on track to land more than $32 million for 15 projects. The announcement said that every community project funding request made for Nevada’s Congressional District 2 and submitted to the House Appropriations Committee for the 2023 fiscal year had been forwarded for approval.

Those measures will next go to the House floor to be voted on, according to Amodei.