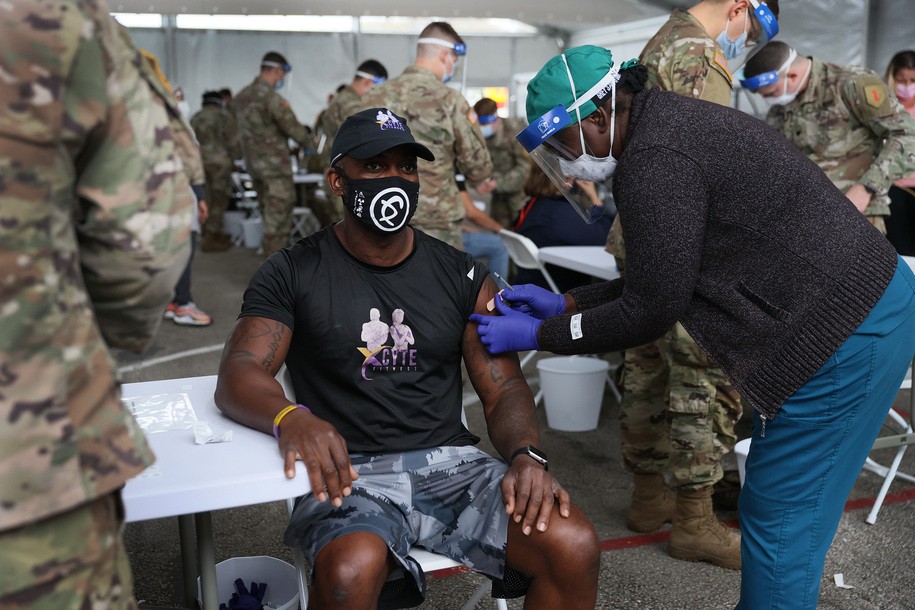 Back in January, the Times appeared to understand that the achievements of “Operation Warp Speed” were little more than smoke and mirrors. The nation was getting announcements about increased production, but production was actually slipping.

While the latest article credits Trump with repeatedly invoking the Defense Production Act to help Pfizer obtain supplies, as The Wall Street Journal reported in December, Pfizer had been forced to cut projected shipments of vaccine specifically because of a failure to secure the manufacturing supply chain. No one in the Trump White House was working with Pfizer to give them what was needed to meet production targets. Absolutely no one was willing to work to provide manufacturing equipment to expand their abilities. Instead of the projected 100 million doses, Pfizer was forced to cut expected deliveries in half.

When it came to getting those vaccines out to the public, there was nothing that even resembled a coherent plan. States that had expected a federalized system based on months of Trump promising a “military operation” managed by Gen. Gustave Perna found that there was no such system. Or even a plan for such a system. Instead, states were left to develop their own plans for administering vaccine, with federal responsibility stopping with the delivery of vaccines to their borders—a process that was largely outsourced to a distribution center subcontracted to Texas-based McKesson Corporation.

States were left to plan vaccination events based on numbers of doses they were told would be delivered each week, only to have those doses fail to materialize. As CNN reported, states repeatedly received far fewer doses than they were promised “without explanation.” The unpredictability of the numbers left states unable to plan for the transportation, storage, or administration of vaccine that was showing up late, in reduced amounts, and on a schedule that changed without warning. And all of this was happening as the number of COVID-19 cases raced toward a staggering peak.

All of this came to an astounding head in January when Health and Human Services Secretary Alex Azar promised states that they would begin receiving the doses that the federal government had held in reserve for use in administering the second dose of Pfizer or Moderna vaccines. Then, as The Washington Post reported just five days before Joe Biden took office, it turned out there was no federal stockpile. Instead, the Trump White House had been artificially inflating the apparent level of delivery by “taking second doses for the two-dose regimen directly off the manufacturing line.”

That’s what Biden walked into: a system that wasn’t just consistently providing less vaccine than promised and unable to give states accurate numbers about what was coming, but a system that was in a hole millions of doses deep.

Coming into that situation, even Biden’s team was amazed at how little there was to see once they could peer behind the curtain. While the Times now claims that Biden’s team “tamped down expectations” so that they could later appear to have worked miracles, the truth is … they worked miracles. In an astoundingly short time, they replaced a system that had been constantly underperforming, failing to give states reliable numbers, and robbing second doses to create the appearance of success with a program that is genuinely succeeding.

Biden invoked the Defense Production Act not just to produce gloves or vials, but to provide Pfizer with expanded manufacturing facilities, to enlist Merck in manufacturing rival Johnson & Johnson’s vaccine, and to provide the raw materials necessary to remove the roadblocks to production. All of which are steps Trump simply refused to take. The new White House team then leaned hard on pharmaceutical companies to meet their goals, and worked with them directly to ensure that targets stopped slipping.

Crucially, Biden secured not only enough doses of vaccine to vaccinate every American—he secured more. In fact, on Wednesday, President Biden is set to announce that he has purchased another 100 million doses of Johnson & Johnson’s single-dose vaccine. This vaccine is being purchased explicitly in case there are any unforeseen incidents that delay production of Pfizer or Moderna’s vaccine. Biden isn’t just making sure that Americans have all the vaccines necessary, he’s securing a backup plan.

Biden is doing what his team has done from the beginning: treating the pandemic like a nation-defining emergency that has already cost more than half a million lives. Trump treated the whole thing like one of his real estate deals, using hype and outright theft to paper over a crumbling core.

As a result of the steps Biden has taken, The Washington Post reports that Alaska has now become the first state to open vaccination to everyone over 16. It won’t be the last. Other states are set to move to vaccinating a large swath of the general public within the next two weeks. By April, vaccinations can be expected to be open to every adult in every state.

That’s happening in spite of what Trump did. Not because of it.