President Biden addresses the nation to deliver a speech full of progress, hope, and remembrance 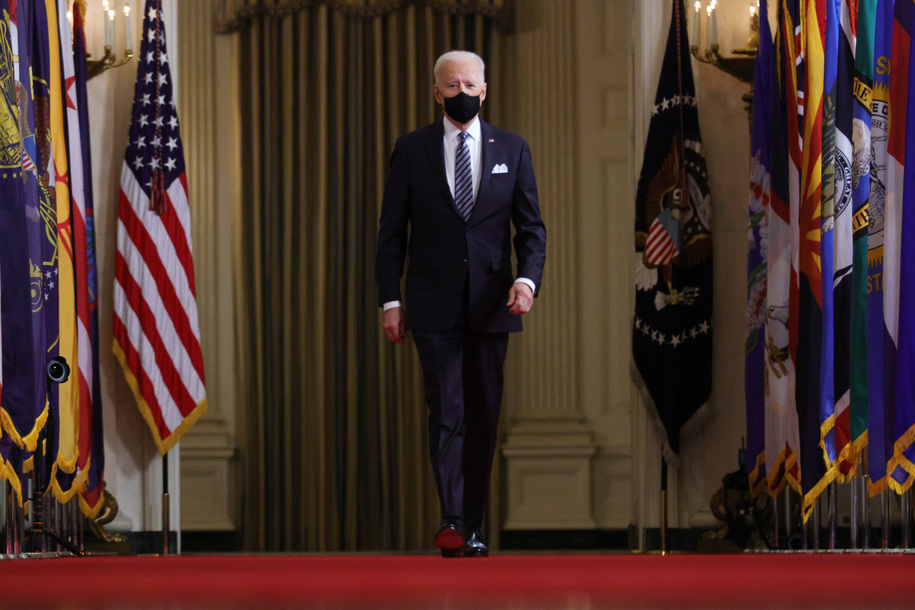 In his speech, Biden also spoke to the hate crimes taking place against Asian Americans; a horrible side effect, not of COVID-19 itself, but of constant efforts by Donald Trump and others on the right to blame the virus, and the losses it has generated, on anything but their own failed response. “It’s wrong, it’s un-American, and it must stop,” said Biden.

Biden devoted a portion of his speech to praising the first responders, doctors, and scientists who have put themselves on the line to save lives over the last year. He memorialized not just the 529,000 lives lost, but all the “moments” that should have happened over the last year. The president joined America in mourning not just the people who have vanished from our lives, but the weddings, birthday celebrations, family reunions, and first dates that should have been there … but were not.

“The things we used to do that always filled us with joy, have become things we couldn’t do, that broke our hearts.”

And he called to us to learn, to grow, and to heal from this experience.

“We all lost something — a collective suffering, a collective sacrifice, a year filled with the loss of life. In the loss, we saw how much there was to gain. An appreciation, respect and gratitude.”

And over everything else, Biden told the nation that they “deserved the truth … are owed the truth” about the status of the nation, the efforts being put forth to fight the pandemic, and when everyone might expect to resume lives that were frighteningly interrupted a year ago. With that, Biden outlined all the steps being taken—from more vaccines to the deployment of FEMA and the military to provide vaccinators. Biden announced that the goal to reach 100 million shots will actually be achieved by his 60th day in office, just 10 days from now. Biden promised that the rate of vaccinations will continue to accelerate, so that opening vaccinations to all adults on May 1 will rapidly turn into everyone who wants a vaccine, actually receiving a shot.

As Biden spoke about “emerging from a dark winter into a hopeful spring and summer,” it certainly seemed as if he was talking about more than just the disease we’ve all faced.

“Over a year ago, no one could imagine what we were about to go through.”

On March 12, 2020, then candidate Joe Biden addressed the nation on the topic of COVID-19 for the first time. Biden’s speech followed one night behind an appearance by Donald Trump—one in which Trump repeatedly blamed the “foreign virus” on China, suggested it could be fought with a tax cut, and told Americans “the threat is very low.” A day later, Biden stepped up to thank first responders, console families suffering a loss, and to issue a promise that help was on the way, but warned that fighting COVID-19 was going to require “a radical change in our personal behavior.” Biden promised to “lead by science” and warned against downplaying the vaccine and the use of xenophobia to dismiss the threat. And Biden announced that he had a plan to both fight the virus, and provide economic relief from the damage that the pandemic was certain to exact on individuals and businesses.

It’s not clear exactly how that speech affected the outcome of that speech affected the course of the election. On March 12, Biden had just won the majority of states in a second week of multi-state primaries, putting him well ahead of Sen. Bernie Sanders in the race for the nomination. But that speech from Biden offered a stark contrast to the stumbling, ineffective speech from Trump the previous evening. It was a promise that competent leadership was still available if America would only reach out and take it. Much of the content of the plan that was outlined on that evening exactly matched the contents of the American Rescue Plan that President Biden signed on Thursday.

In many ways, the last year may seem like a lost year. It’s certainly a year measured in terms of lost lives, lost time with loved ones, lost opportunities. But Biden’s speech on Thursday evening served to remind the nation that the year was not lost—because it was a year in which something very important was renewed: competent, forward-thinking leadership that can address a crisis with powerful actions and a belief that government can be a force for good.