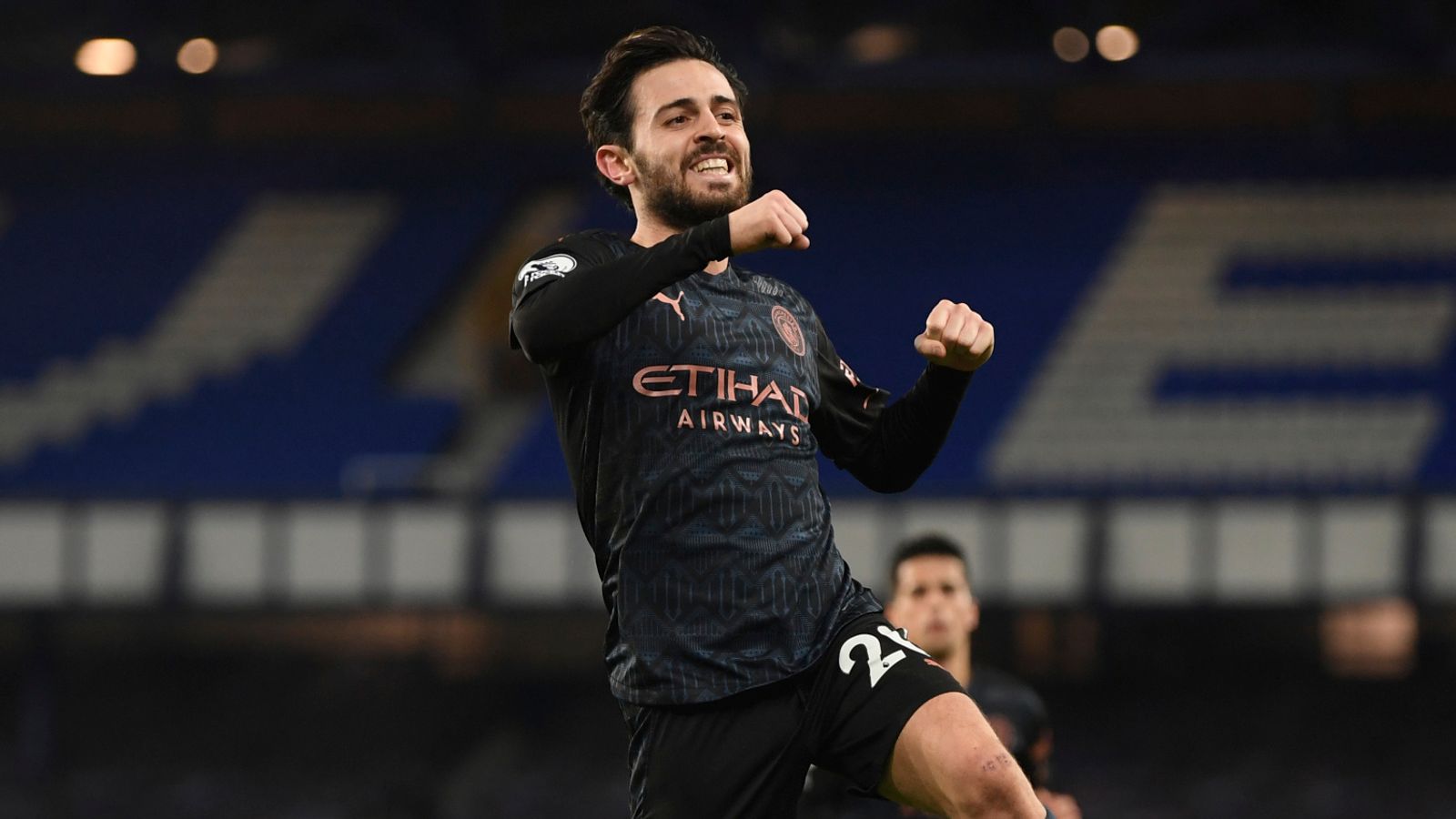 Man City are no longer playing catch-up in the fixture schedule and, as rivals have spluttered around them, the gulf has been laid bare.

Trying to play catch-up with this superior side seems futile right now.

Victory at Everton was their 17th in a row in all competitions, their 12th in the Premier League. The runaway leaders are the first team in top-flight history to win their opening 10 matches in a calendar year. They have not trailed for a single minute in any of their last 16 Premier League games.

This time there was no Ilkay Gundogan, and Pep Guardiola felt content enough to leave it late until bringing on the fit-again Kevin De Bruyne, who eased himself into the action with an immediate drop of the shoulder between blue shirts and a pinpoint pass. Fernandinho made a late cameo, too, while Sergio Aguero watched from the bench, Guardiola cautious but hopeful about his impending return from the off.

But City’s machine has kept motoring, morphing, finding ways to win. Though Richarlison bundled in an equaliser and Everton strove to frustrate, there remained an inevitability to the outcome.

Bernardo Silva was an orchestrator here and his strike summed up the swagger: a slick one-touch affair involving Walker, Mahrez and Jesus that turned moving parts into mannequins.

Guardiola has warned his players not to dwell on a gruelling schedule; meetings with Arsenal – in front of the Sky Sports cameras this weekend – West Ham and Manchester United loom, as well as a Champions League tie with Borussia Monchengladbach.

But his squad is clearing each challenge with close to contemptuous ease right now.
Kate Burlaga

After the lifeless display here at Goodison three days ago, it was hard to pick too many flaws in Everton’s latest home reverse against champions elect Manchester City.

Carlo Ancelotti had sought to control matters against Fulham by deploying the extra midfielder in Andre Gomes but his selection backfired. Given the week ahead, it felt like a big defeat and a missed opportunity to move level on points with Liverpool ahead of the Merseyside derby, live on Sky Sports on Saturday.

Faced by Pep Guardiola for the first time on home soil, the Italian got his tactics spot on during a spirited first-half in which his side responded well to Phil Foden’s deflected opener. The manner of Richarlison’s equaliser six minutes later was somewhat fortuitous, but the goal was borne out of Ancelotti’s decision to play Lucas Digne further up the pitch.

A response of sorts from the Fulham debacle was always likely against superior opposition, against whom Everton have certainly felt more comfortable this term, but Wednesday’s eventual defeat also came at a cost.

Everton are without a win in the Premier League this season when Yerry Mina hasn’t started, and the Colombian defender is now set to miss the trip to Liverpool after hobbling off with a calf injury in the first half.

“It was really difficult, and I think for an hour we had a good control of the game – of course, defending,” Ancelotti said afterwards. “Above all, the second part of the first half. After they scored the second goal, it was almost impossible to come back again. Of course, you can lose against Man City so you can’t have any regrets.

“Yerry had a problem on his calf and I think he won’t be available for the game on Saturday but we hope to have Dominic Calvert-Lewin and Allan back.”

It poses another conundrum for the master tactician. With Liverpool showing glimpses of coming back into form, the task of ending Everton’s 22-year wait for a win at Anfield stands just as tall but they will carry across Stanley Park plenty of confidence generated by a seven-game unbeaten run on the road.

“It will be a different game against Liverpool,” added Ancelotti. “We are on a good run away and we believe more. Liverpool are a fantastic team but in football you never know.”
Ben Grounds

Draws could be Fulham’s downfall

Before the game, Bobby Zamora told Sky Sports how vital Fulham’s visit to Burnley was in their bid for Premier League survival.

Despite having a raft of attacking talent starting the game – including Everton goalscorer Josh Maja, Bobby Decordova-Reid and Ademola Lookman – they failed to produce any big moments in the first half and only a Maja strike from range in the second worked Nick Pope.

“It was always going to be a different game,” Scott Parker told Sky Sports when asked about the differences in the two performances. “The way Burnley play, the way the game is, it makes it that way really.

“When you get a result here, what you’re praising is probably not the fluidness your team can be. There’s a different side to you. I felt we matched that very well, but we weren’t able to get our identity and stamp on the game.”

And while Fulham did not lose at Turf Moor and are now six games unbeaten on the road, it was also their tenth draw of the season. They missed the chance to significantly close the gap on Newcastle in 17th and it is another game to add to the ‘what if’ list. Being pegged back at Turf Moor could be a significant decider come May.

They now face bottom side Sheffield United and struggling Crystal Palace in their next two games. It goes without saying that Fulham need to target maximum points in both games.
Charlotte Marsh

Gear up for the next round of Premier League action with our stat-packed preview, as we look ahead to another bumper weekend, including Liverpool vs Everton and Arsenal vs Manchester City live on Sky Sports.