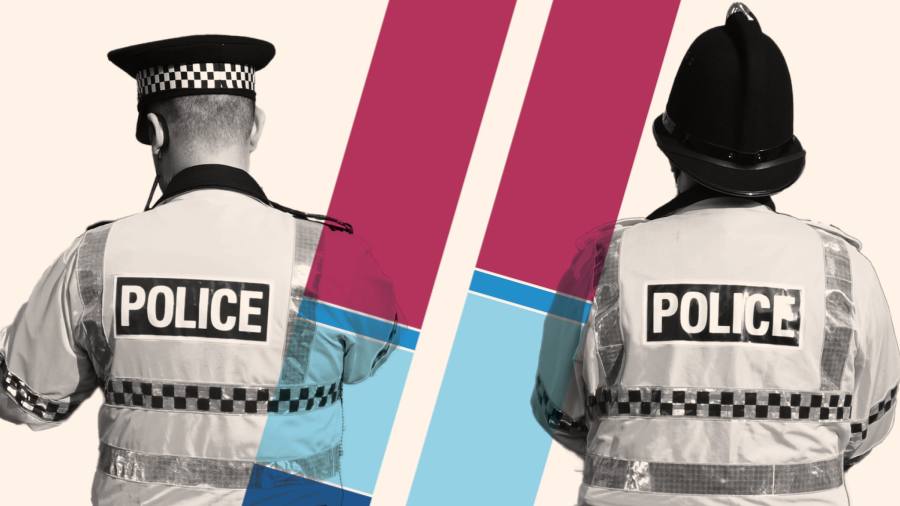 Deep-rooted issues involving corruption, discrimination and sexual misconduct are widespread in police forces across England and Wales, a Financial Times analysis of data from the Independent Office for Police Conduct suggests.

The figures challenge the way national debate has focused on London’s Metropolitan Police.

Earlier this year, home secretary Priti Patel said the Met was suffering from “cultural and attitudinal” problems “across the board”, after a series of scandals and reports exposed racism, misogyny and corruption in its ranks. But the new findings emphasise that such issues are not limited to the capital’s force.

Nearly half of the 44 forces across England and Wales received more corruption and sexual misconduct complaints from members of the public, relative to their size, than the Met in the seven years to 2020, according to the data.

Greater Manchester Police (GMP) recorded around twice as many complaints as the Met in both categories. The Home Office classes the two forces as peers based on the crime-related demographic, social and economic characteristics of the areas they police.

GMP and West Yorkshire Police, another official peer of the Met, both received discrimination reports at a similar rate to the London force, around 60 per 1,000 employees. West Midlands Police — another peer force — recorded 35.

Experts said the data may point to tangible differences between police forces on conduct and culture, but cautioned that this could be mixed with inconsistencies in how forces record their complaints or because of other factors, such as certain forces encouraging people to come forward or making it easier to complain.

The findings show that “policing has a really significant problem” and that “this is about all forces”, according to Sue Fish, a former chief constable of Nottinghamshire Police, who now campaigns for police reform.

Fish suggested that funding should be made available for research comparing forces’ cultures in order to dig into what is driving the differences highlighted by the data.

“You look at Greater Manchester’s figures, I don’t know what sits behind those . . . You think, blimey, what’s happened there? What is going on? What’s the culture like?”

She added that police forces were slowly starting to wake up to cultural issues in the wake of Sarah Everard’s murder in 2021 by a then serving Met officer, but that “they still don’t really want to pick up that stone”.

“It’s still seen as the bad apple or monster scenario, when actually, there are very few monsters. There’s an awful lot of men who do bad things. Many of those are police officers.”

The revelations on policing culture come on top of a BBC investigation finding a decline in operational performance, with the half of police forces in England and Wales that provided data taking more than three minutes longer to arrive at scenes of serious incidents compared with six years ago.

The FT collated complaints data from 300 documents held by the Independent Office for Police Conduct to allow a force-by-force comparison of different types of misconduct. The latest year for which data is available, ending March 2021, was excluded from the analysis because police complaint categories changed that year.

Leicestershire Police received more than 30 times as many corruption allegations, including abuse of position, as peer force Kent Police in the seven years to 2020 — the former noted 62 per 1000 employees while the latter received two. Leicestershire’s other peers, Hampshire Police and Nottinghamshire Police, received 13 times and four times fewer allegations, respectively.

Bedfordshire and Hertfordshire attracted the most discrimination reports, with 91 and 85 per 1,000 employees respectively — rates around three times higher than some of their peers.

Multiple allegations could refer to the same employee. The allegation rates are probably skewed downwards by the inclusion of backroom staff in the total workforce numbers. Such staff, who are usually civilians, can attract complaints but there are likely to be far fewer of these than for officers, who have contact with the public. Allegations lodged by staff are missing from the data because they cannot complain in the same way.

Gwent Police recorded allegations of sexual misconduct or sexual assault at a higher rate than any other force because, Gwent said, one employee who has since been dismissed received 39 allegations in 2015.

Wiltshire Police, Dyfed Powys Police and Nottinghamshire Police all attracted sexual conduct allegations at a rate three to five times higher than some of their respective peers. The three forces noted 10 to 11 allegations per 1,000 employees. The Met registered six per 1,000.

Of its peer group, the Met received the fewest non-sexual assault allegations, including serious assaults, noting 127 per 1,000 employees to GMP’s 232.

Gavin Hales, a police and crime researcher at London Metropolitan University, said the findings probably represented a mixture of factors and an undercounting of incidents. “It’s not really clear whether having lots of complaints is indicative of lots of bad practice or something else . . . Some forces are more likely to be proactive in encouraging complaints than others,” he said, adding that those with low rates of complaints may not be recording them properly.

He added that public bodies needed to investigate the discrepancies, because some forces had had “real problems with conduct and corruption”.

“If you have reliable data, then there’s scope for institutions like Her Majesty’s Inspectorate of Constabulary, or the Home Office, to identify where there may be areas of greater concern,” he said. “Are there forces where there are more or less issues with ethical integrity and culture? At this point we don’t really know.”

In response to the findings, the forces said they take complaints from the public extremely seriously. Nottinghamshire said its figures reflected confidence among victims to come forward, while Bedfordshire said its figures could have been influenced by its small workforce and the diversity of the population it polices. Hertfordshire and GMP said it was not always reliable to compare forces due to variations in recording practices.

Wiltshire and Dyfed Powys did not respond to requests for comment.

The IOPC said it uses the information it gathers to identify trends and inform its work “in driving up standards for the handling of police complaints at force level and nationally”. It said it uses a consistent process to collect the data from forces but “as with any data, there are potential problems, in particular recording errors”.

The published data is not broken down by subject or complaint case, nor does it say how many allegations were upheld or proven in each misconduct category.

The allegation rates per 1,000 employees were calculated based on Home Office data on the size of each force’s workforce in 2020. Nationally, police officer numbers that year were about the same as in the year ending March 2014, the start of the data period.

Some of the rates may be too small to be statistically significant.