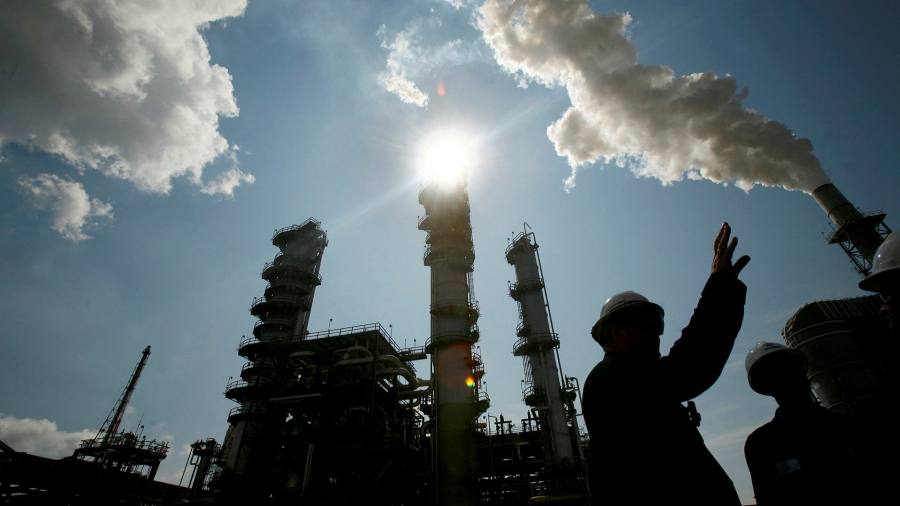 Sign up to myFT Daily Digest to be the first to know about Oil & Gas industry news.

The US oil and gas pipeline industry is looking for new opportunities to lay steel in the ground with pipes that carry the carbon dioxide produced when fossil fuels are burnt.

The midstream energy sector has clashed with climate campaigners who oppose pipeline projects as infrastructure that locks in greenhouse gas emissions. Wall Street is pushing the industry to show how it will adapt to demands for a lower-carbon world.

In response, pipeline operators are pointing to their potential as a link in carbon capture and storage (CCS) systems, in which CO2 emissions are trapped in underground reservoirs where they can be kept out of the atmosphere. Pipelines would move CO2 from industrial flues to the reservoirs.

“It’s hard to see how climate objectives are met without pretty widespread carbon capture and sequestration,” Steven Kean, chief executive of Kinder Morgan, one of the largest US pipeline companies, recently told analysts. “We think we’ve got the expertise on the pipeline side of it.”

The US already has about 5,150 miles (8,300km) of CO2 pipelines. The network is tiny compared to the national web of oil and gas pipes, but it is the largest in the world.

They are mostly clustered around the Permian Basin oilfields of west Texas, where CO2 is injected into wells to squeeze out stubborn crude oil deposits. Revenue derives from selling the gas and claiming a federal tax credit worth $35 for each tonne of carbon put underground.

But future growth hinges on far more widespread deployment. Pipes would funnel CO2 exhaust from emitters such as power plants, cement factories and oil and biofuel refineries to underground sites in some cases hundreds of miles away.

François Poirier, chief executive of pipeline company TC Energy, recently told analysts that a “fundamental aspect” of the CCS industry was “the ability to store and transport a molecule, which is, of course, our core business.” TC Energy is best known as developer of the now-cancelled Keystone XL crude oil pipeline, a target of environmentalists.

The business opportunity is potentially immense. A July report from the Biden administration’s Council on Environmental Quality said that a CCS industry large enough to help meet the country’s goal of “net zero” emissions by 2050 could require 68,000 miles of new CO2 pipelines at a cost of as much as $230bn. That is roughly comparable to US liquid fuel pipeline mileage built since 2000, a boom time for the oil industry.

“The capital is going to be large, and obviously existing infrastructure players like ourselves are going to be involved,” Al Monaco, chief executive of Enbridge, a Canadian pipeline company with extensive US assets, told analysts last month.

The midstream sector is under intense pressure to show it can survive a transition to cleaner fuels. The Alerian MLP index, which tracks shares of pipeline partnerships, is down around 43 per cent over the past five years. The broader US stock market has more than doubled in the same period.

Carbon capture has seen false dawns before, largely because new projects have failed to make money owing to high costs and the lack of financial incentives to capture it, such as a price on carbon.

But many see the tide turning in Washington, where carbon capture is one of the rare items on President Joe Biden’s climate agenda to enjoy wide bipartisan support.

Last December’s omnibus spending bill will feed at least $6bn into the sector over the coming years, and the infrastructure package currently moving through Congress could provide government-backed low-interest loans for carbon capture infrastructure and speed up permitting for new projects.

“The real cog in the wheel here today is economics,” Jesse Arenivas, the head of Kinder Morgan’s energy transition ventures business, told the Financial Times. “I think the policy support is coming.”

The fund manager BlackRock and US oil refiner Valero are backing a company called Navigator CO2 Ventures, which has proposed a 1,200-mile pipeline system to collect gases from industrial plants such as ethanol refineries for shipment to an subterranean site in Illinois, sequestering up to 12m tonnes a year.

Many environmentalists see CCS as a fossil-fuel industry boondoggle and distraction from expanding renewable power and other zero-carbon technologies. Doubts have been underscored by failures of high-profile projects such as Petra Nova, a CCS-fitted coal-fired power plant in Texas that shut down last year. The $1bn project had received a $195m grant from the US government.

Kinder Morgan’s Arenivas also pointed to delays in permitting new storage reservoirs, which he said can take as long as five years for the Environmental Protection Agency to approve.

He added that the “anti-pipe movement” in the US, which has derailed a number of oil and gas projects, could pose similar threats to new, large-scale CO2 pipelines.

Still, while Arenivas sees his company building more oil and gas infrastructure in the future, he says it’s “inevitable” that eventually it will be building more pipelines to carry CO2, as well as hydrogen, than fossil fuels. “I do believe it provides a huge growth story,” he said.